Today in the podcast we take our first deeper dive into commercial breakdowns with the help of the Patreon campaign. The Wandering DP is no longer wandering alone and has been joined by an up and coming cinematographer to help improve the level of detail presented in the show.

House lighting can often be difficult when you are battling multiple sources and colours of light, and trying to keep a balanced and realistic mood. We had one day and one location to shoot both internal and external scenes set during the day and night.

Supporting the podcast will mean more podcasts like these, more detail, more interesting guests and more enjoyment for you. Please click the link below as every contribution helps. 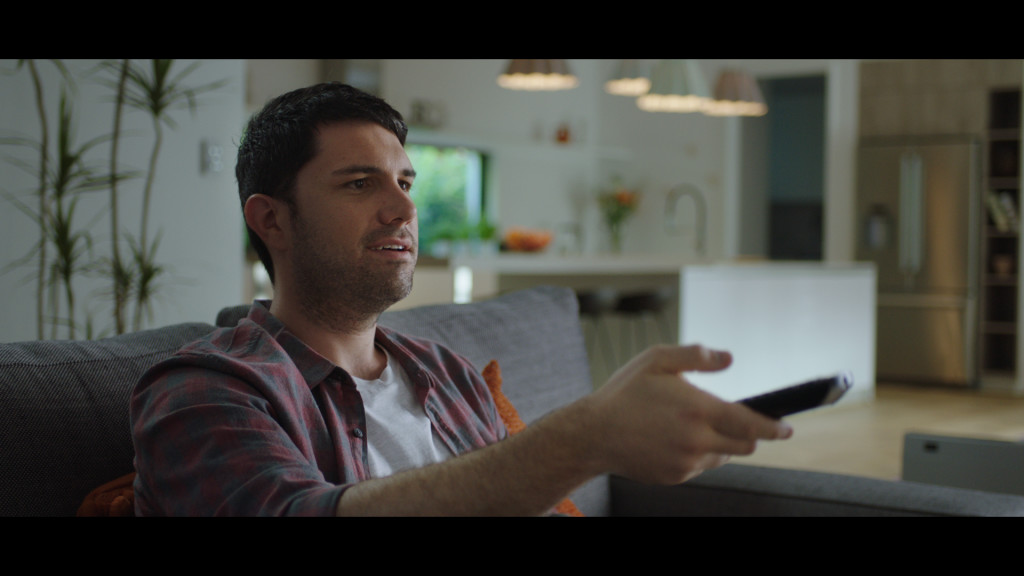 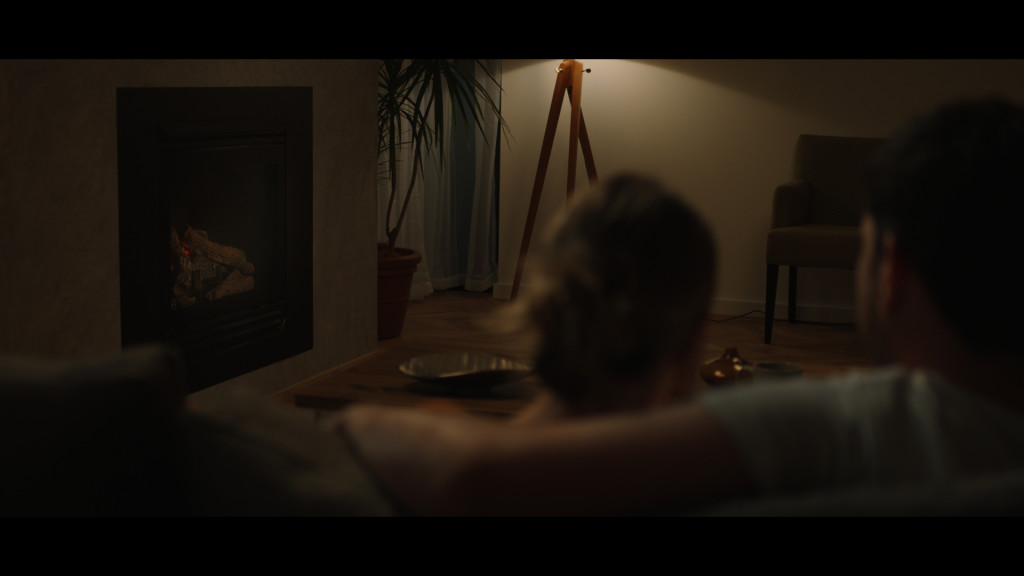 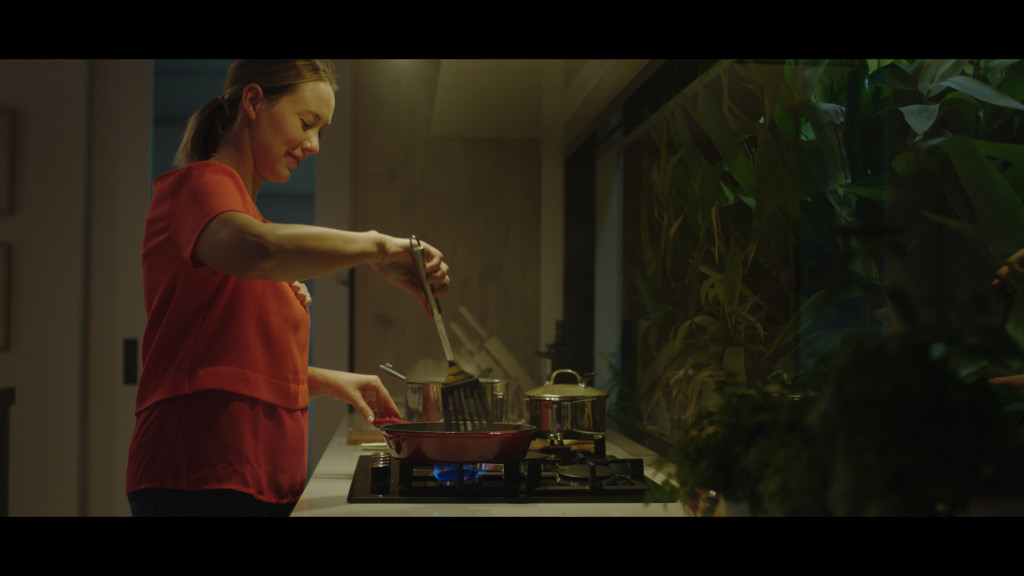 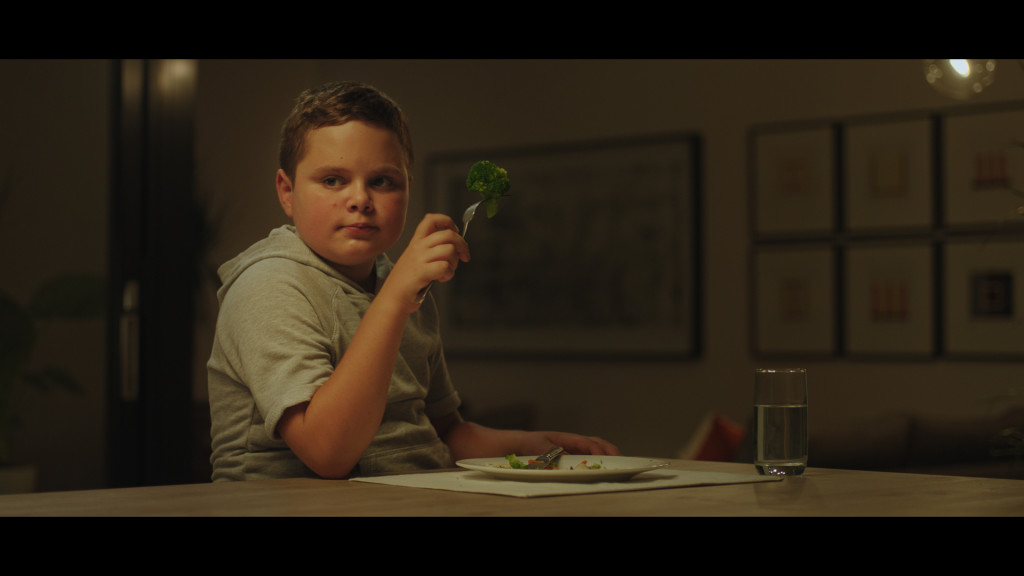 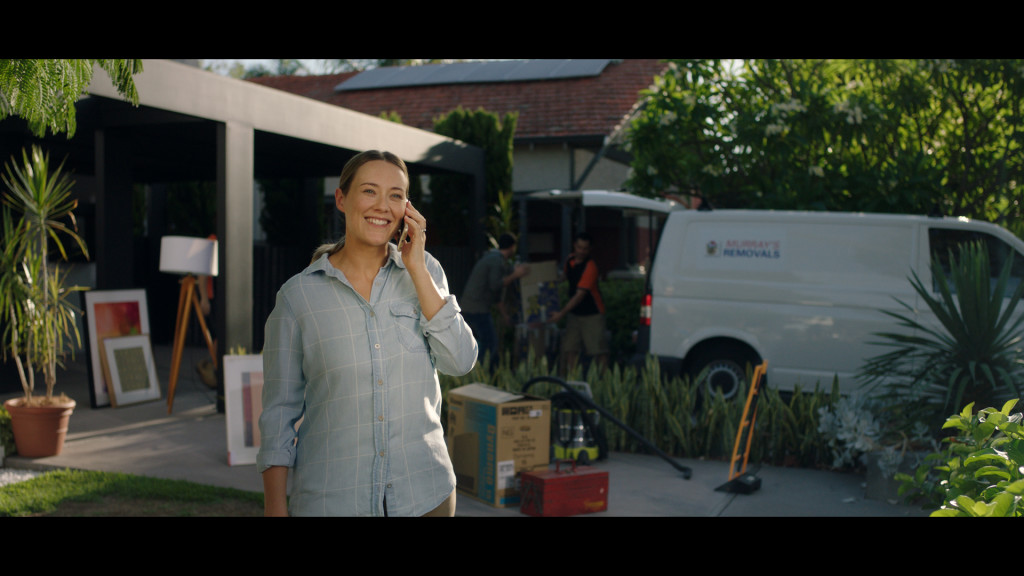 The script had one hero sitting on a couch with watching the tv and a second hero appearing next him.

The shot had to hide the second character and show the main guy with a remote in his hand.

The challenge of the scene was balance the bright kitchen background with couch area that was considerably darker. 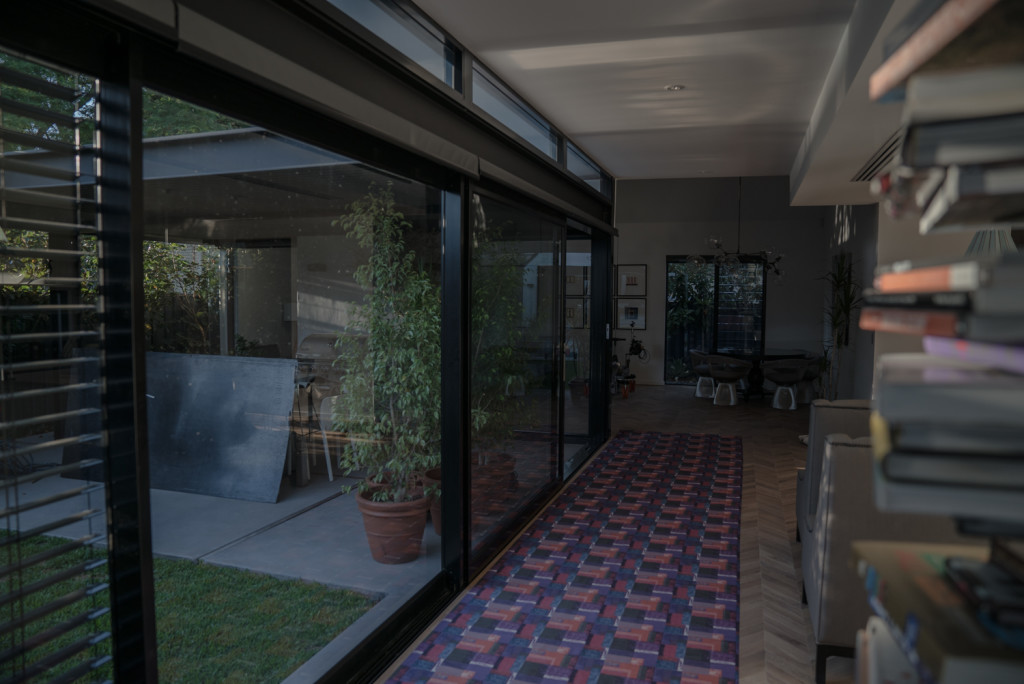 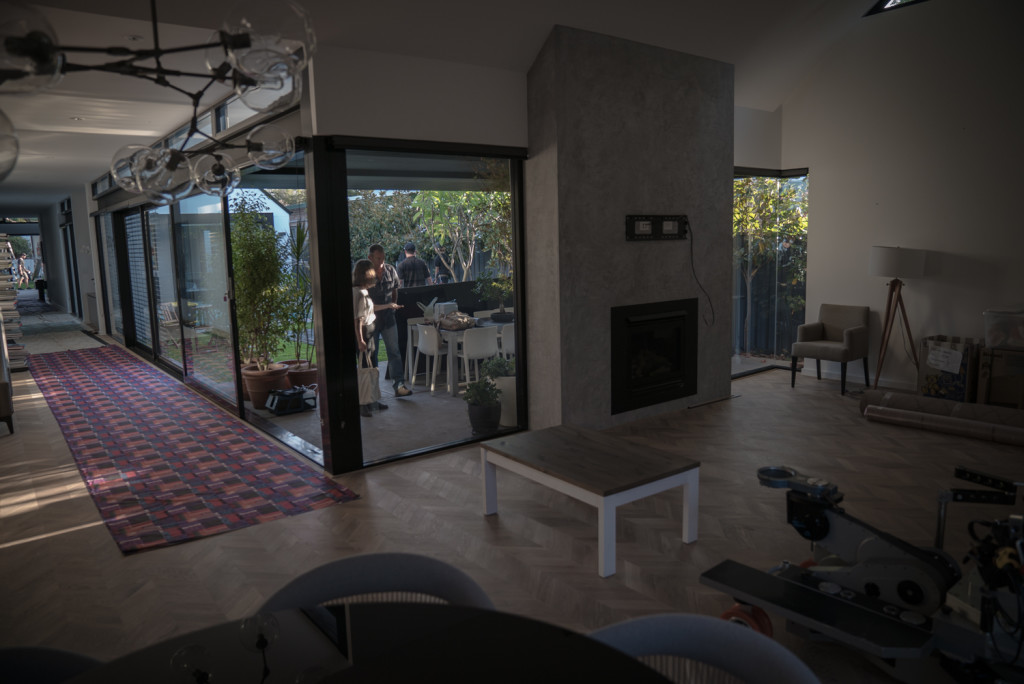 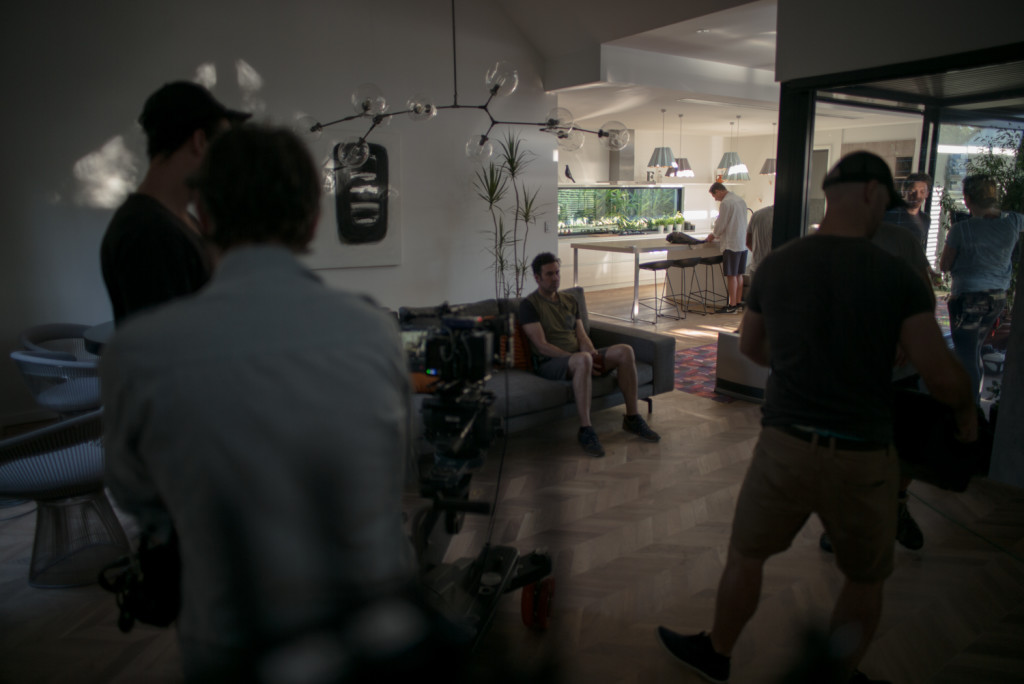 The director wanted a simple view of the main character the kitchen visible in the background. 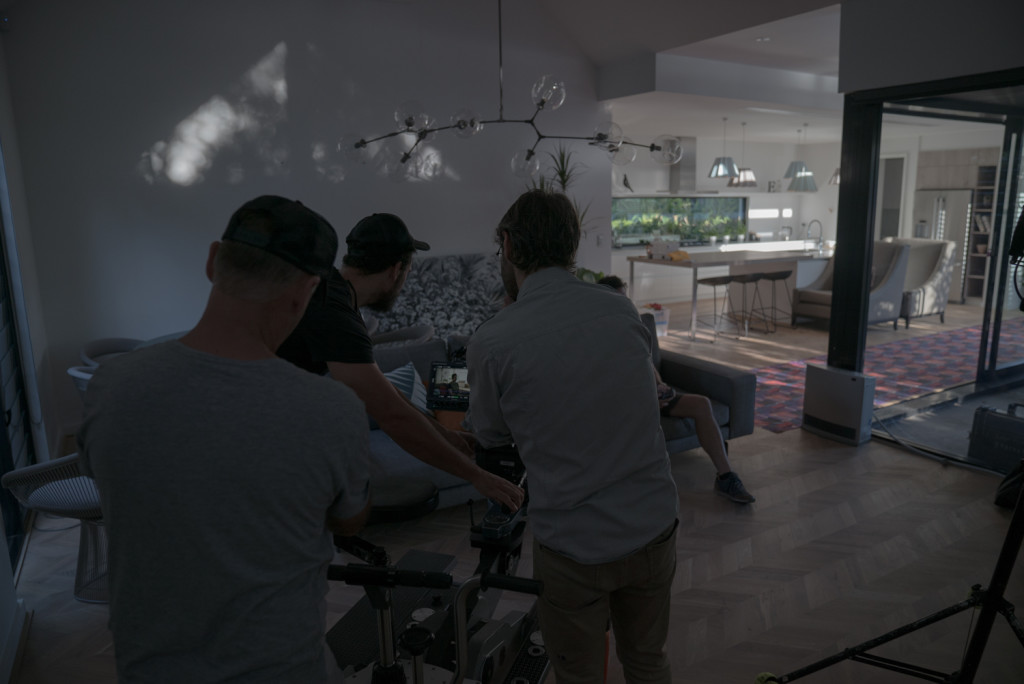 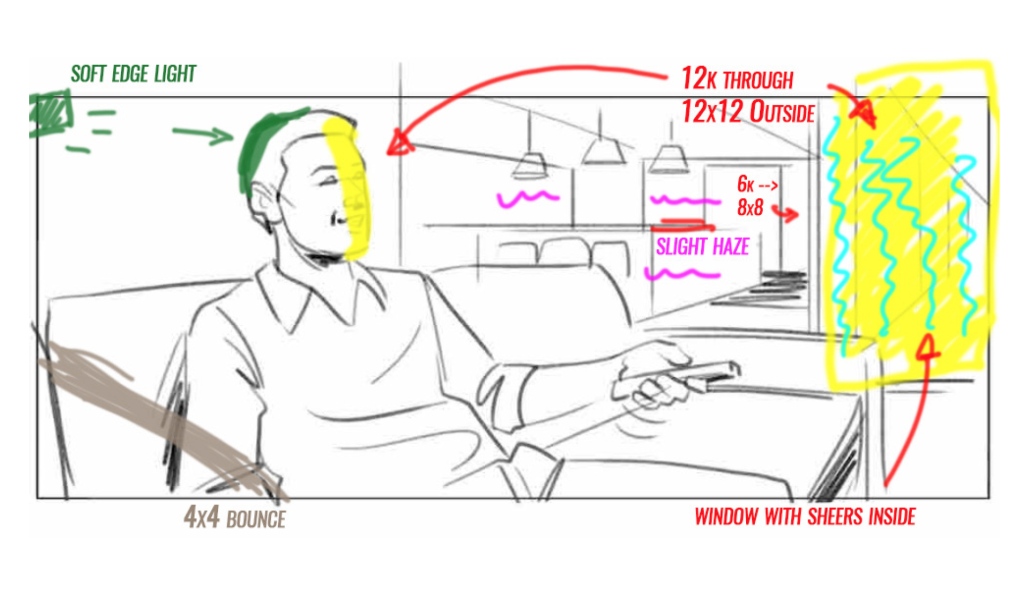 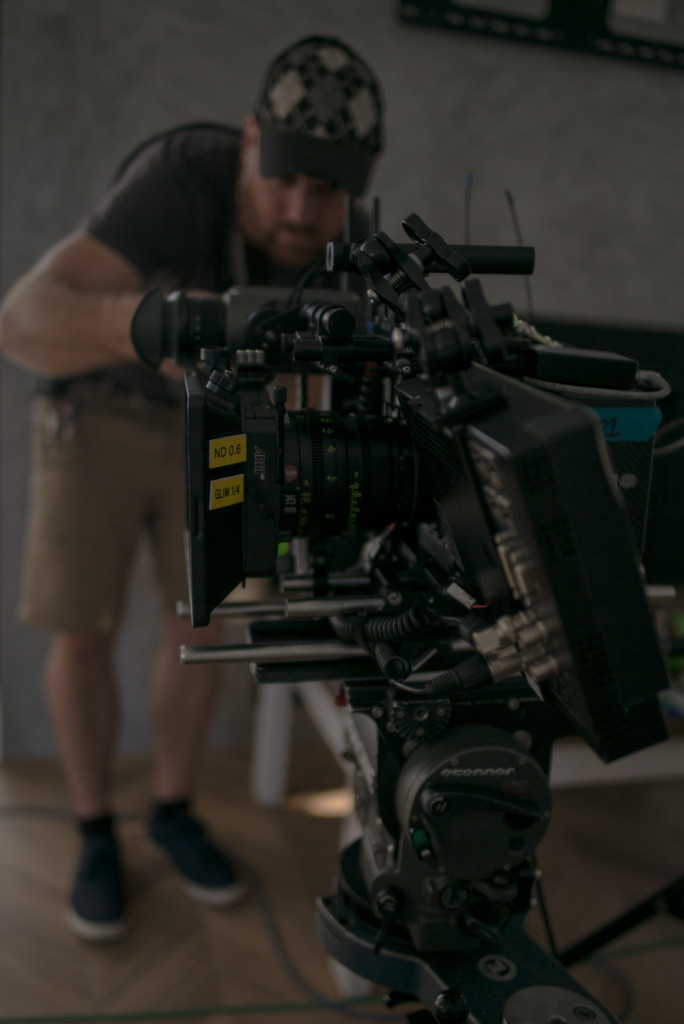 Bring in the big guns (well as big as Perth’s guns get). 12k and 6k HMI were set up fired through the 12×12 1/4 grid and a 6×6 full grid closer to the window to create a big soft sunlight emulating source.

Key was initially at f2.8 so the HMI’s were brought closer together which lifted it to f5.6.

The kitchen background was still too hot so we put up 12×12 full grid and a 6×6 1/4 grid to soften the sun and the blinds were shut further down the corridor leaving a level of f4-f5.6

A 4×4 poly brought in as fill and the Kino shifted directly behind the hero. A low cutter dropped the level of the kitchen counter, which was at f11.

Finally, the practical lights above the kitchen counter were turned on and the decision was made with the director that although it was day time, the lights added extra warmth to the shot, fit the brief and made a nicer image. 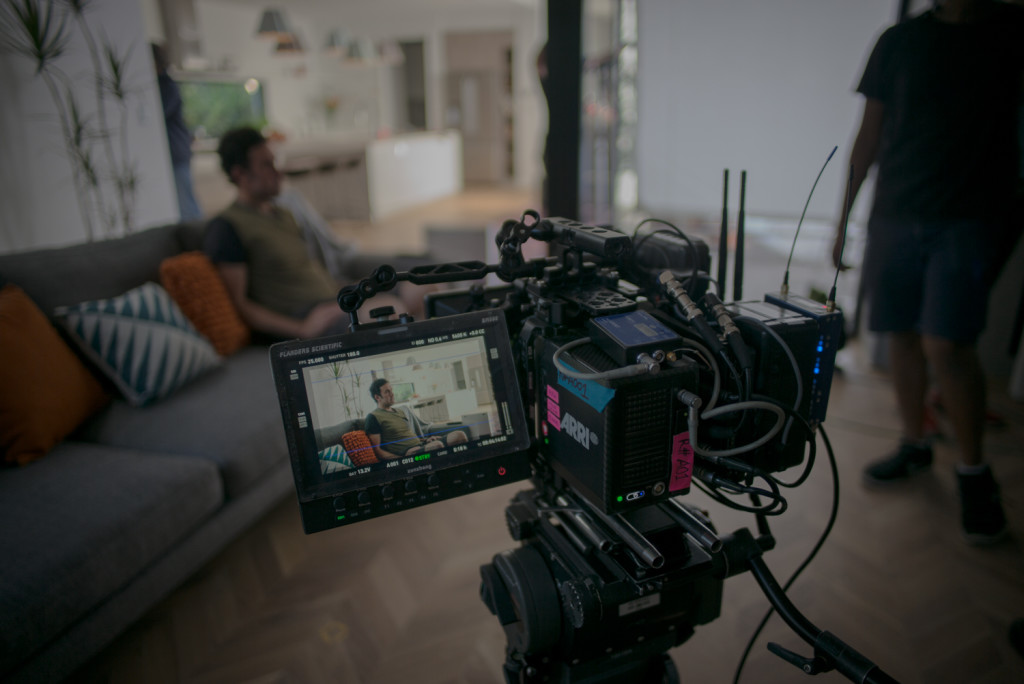 Background much brighter than foreground before the HMIs were up. 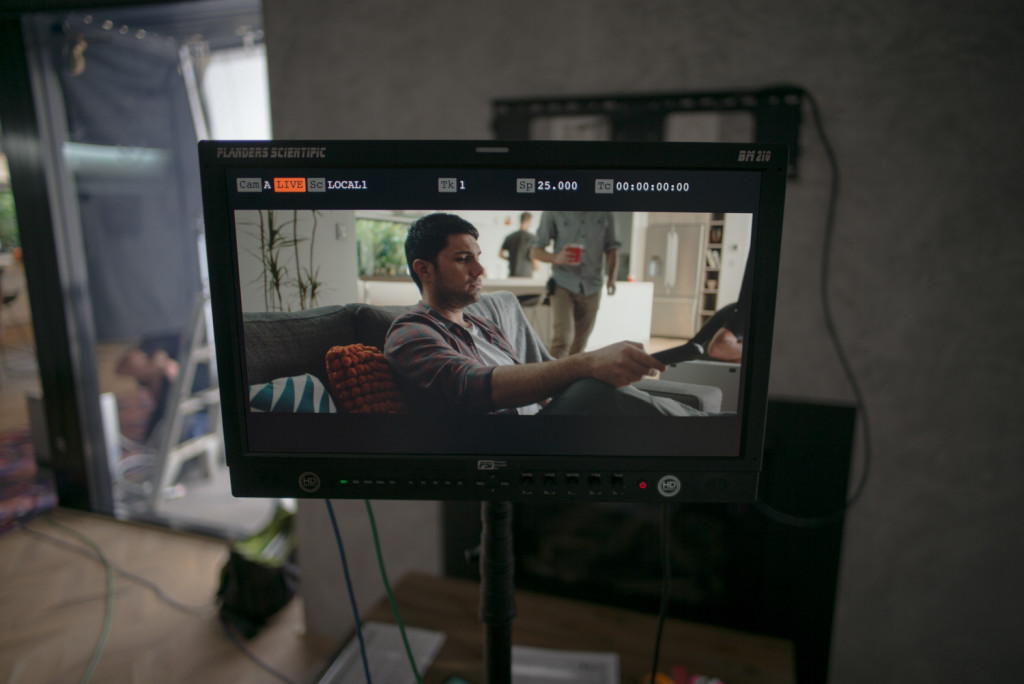 Talent in and still looking too bright in the background.

Now was time to warm things up a little as one of our heroes is now joined on the couch by his lovely partner and they’re settling in for some relaxation in front of the fire place.

In the sequence there were two angles: 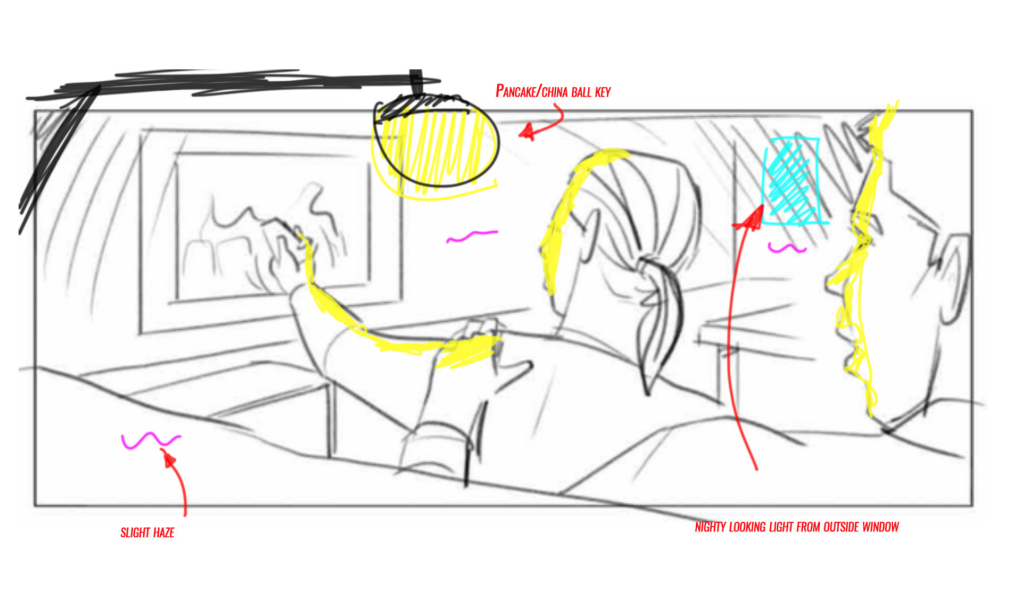 Black out. The dynamic of the house lighting had to change and the grips got going again while the LX team brought in some warm and soft Chimera’s with 500w tungsten globes.

Next step was to bring down the ISO of the Alexa to 400. As mentioned in previous podcasts, bringing the ISO down in dark situations helps retain as much detail in the blacks as possible.

We put the camera around behind the couch and finally art department had to go to work and move a practical and chair to hide the dimmer.

The pancake became the key, the china lantern became the ambient, an Area 48 with 1/4 CTO became a side light from screen left and a Dedo illuminated the fireplace.

The Dedo backlight from the last shot was left in play to light the back of the couch though the agency asked for more level on the backs of the heads so the faithful 2×4 poly was angled just below the back of couch. This time is was a C-stands turn to hold the poly while the rest of the crew went for a dip in the pool with the flamingo.

We did have an issue with flickering of the practical in the background, which would intermittently start flickering but but we managed to time takes between flickering periods.

A fire plate was shot at 800 ISO to be able to add some fire VFX. 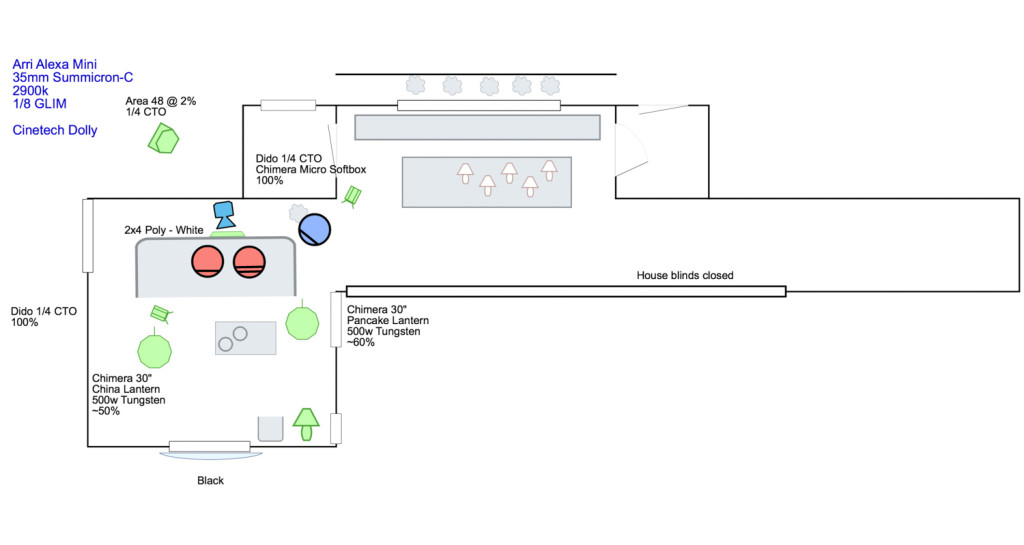 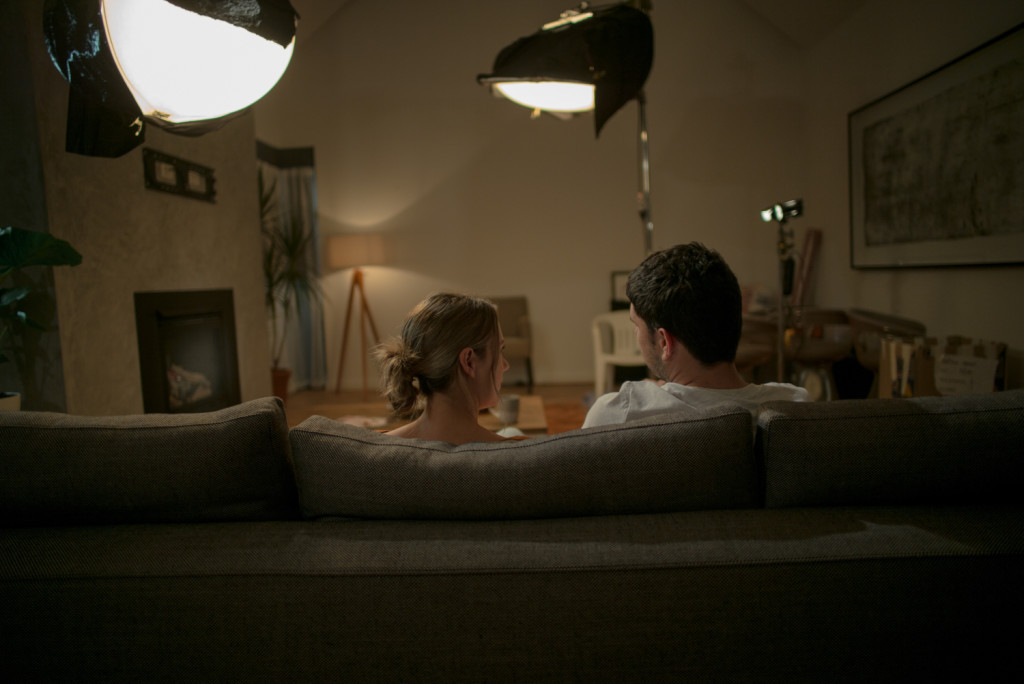 In this scene a boy was to cheekily feed his massive dog a piece of broccoli while his mum’s back was turned. Thankfully, the feeding action was cheated for the first two shots and hound of green love was only brought on set for the final shot.

We will look at two shots with a wide of the mother cooking and a close up of the boy. 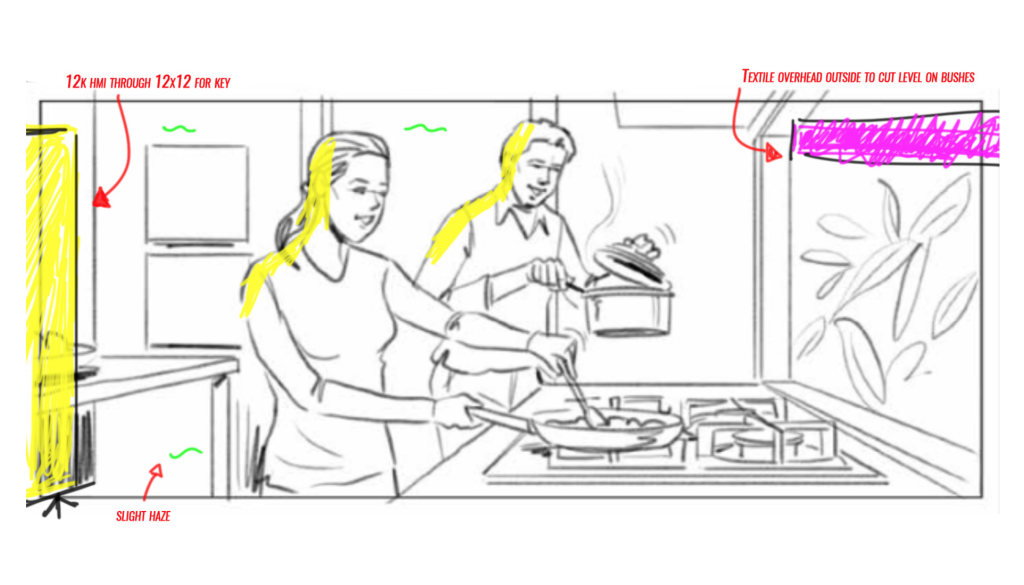 We now focused the house lighting on the kitchen and set up the wide by putting the two chimeras as close to the boy as we could, then shimmied them around to set the key at f2.8 for both mother and son.

The window in the background looked bare so art added a curtain/shear on a c-stand and we got them to bunch it up to reduce the level coming through from an Area soft with 1/4 CTO. We had to angle the Area 48 so it looked more like moon light.

To complement this we added 1/4 CTO to the pantry window and played with the blinds to get a level of f1.4. The rest of the background was at f2.0, with the help of the very fancy house lights which had been hand blown in Stourbridge, UK, just down the road from Ian’s parent’s house. Despite him smashing his head on them every 5 minutes they managed to add nice ambience to the background.

Next we realized that we’d shit the bed, the levels weren’t high enough and boosted the ISO to 800.

A spare Area 48 was bounced against the ceiling between the mother and son and with that we could bring the ISO down to 640. This meant the moonlight Area 48 in the back window had to be brought up to 50%.

The last piece of the puzzle was to turn the range hood lights on and craft 1/2 CTO + 260 diff squares for each of them. 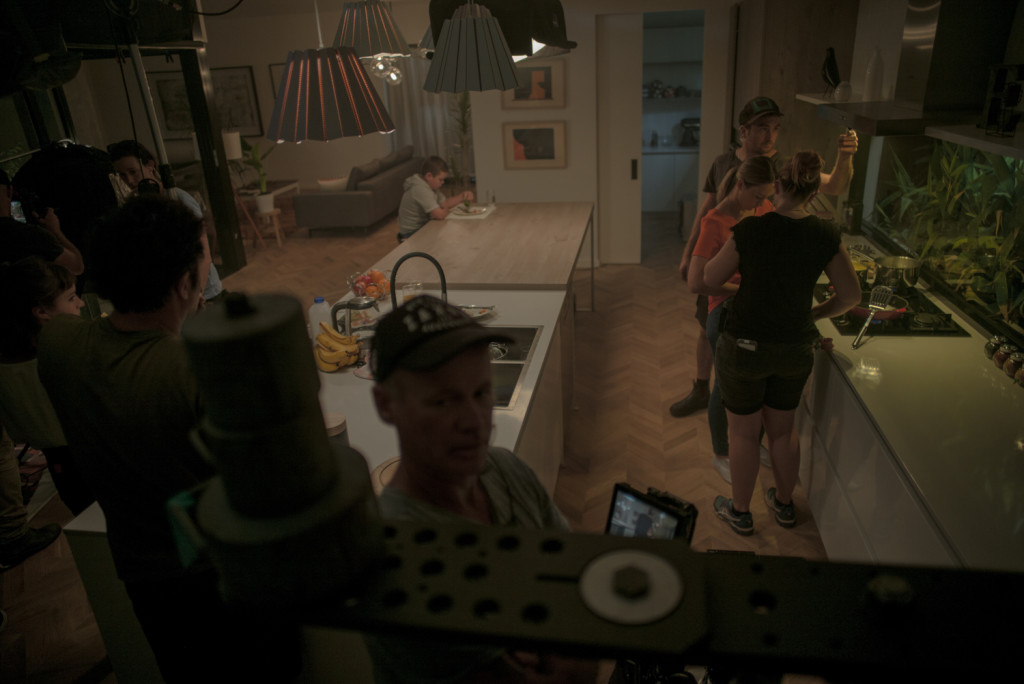 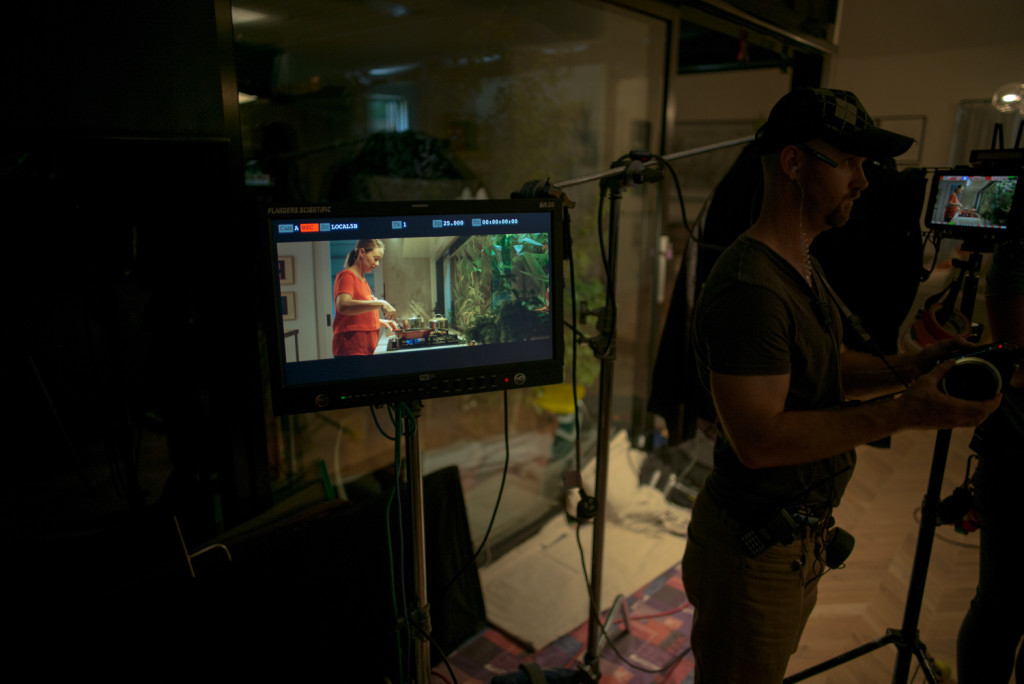 The Close Up – House Lighting

For the close up we brought in a dedo with chimera for a backlight, draped a black cloth on the reflective table infant of the boy and a placed little floppy on camera right to shape his round face. 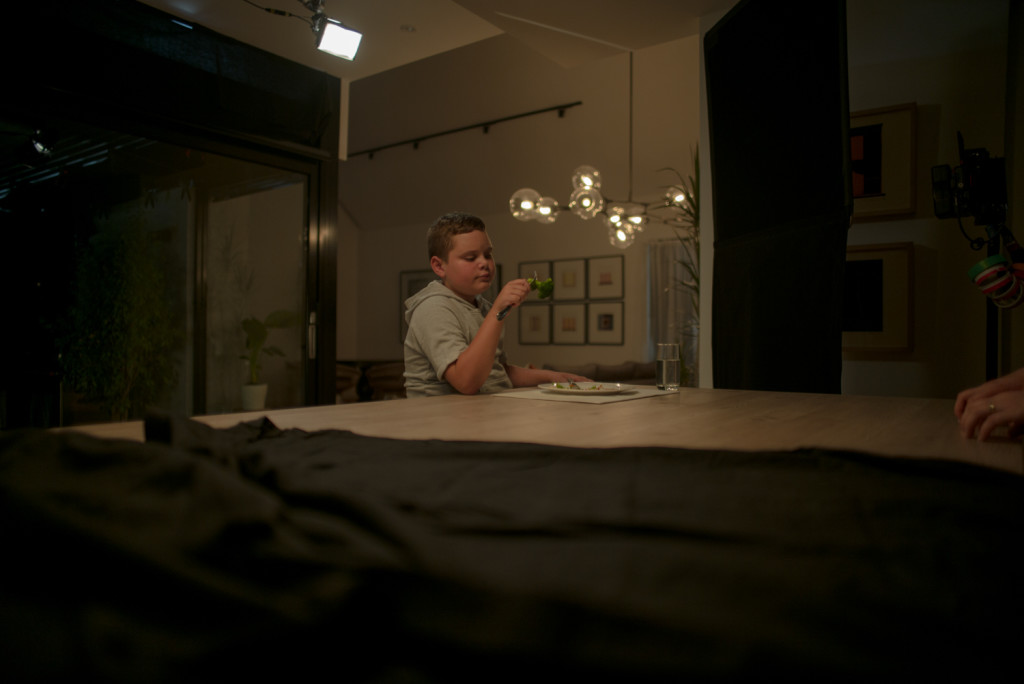 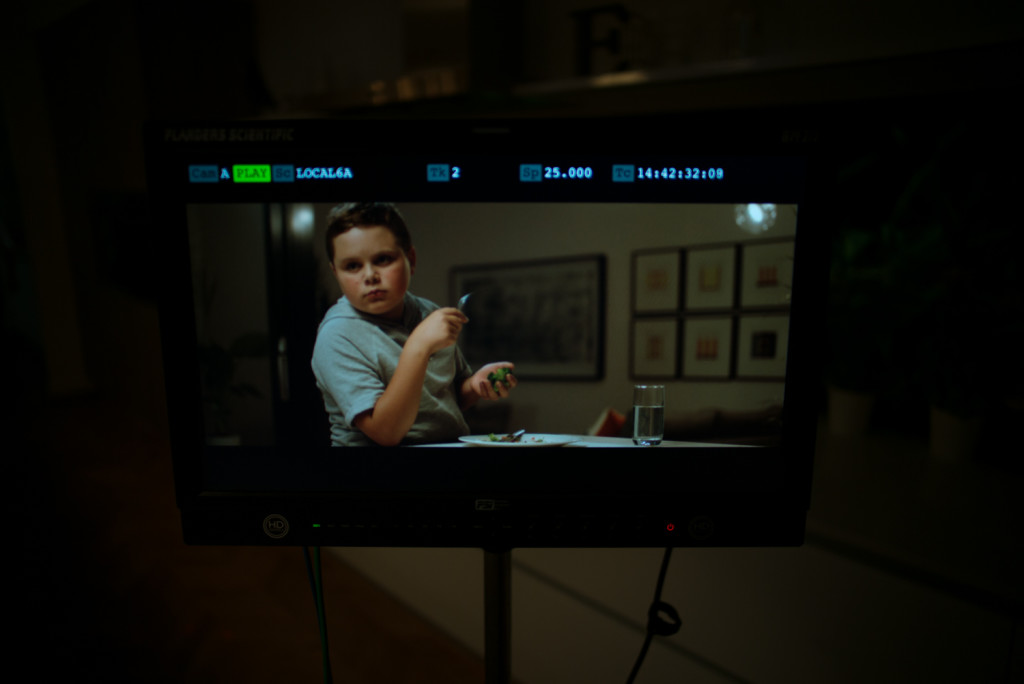 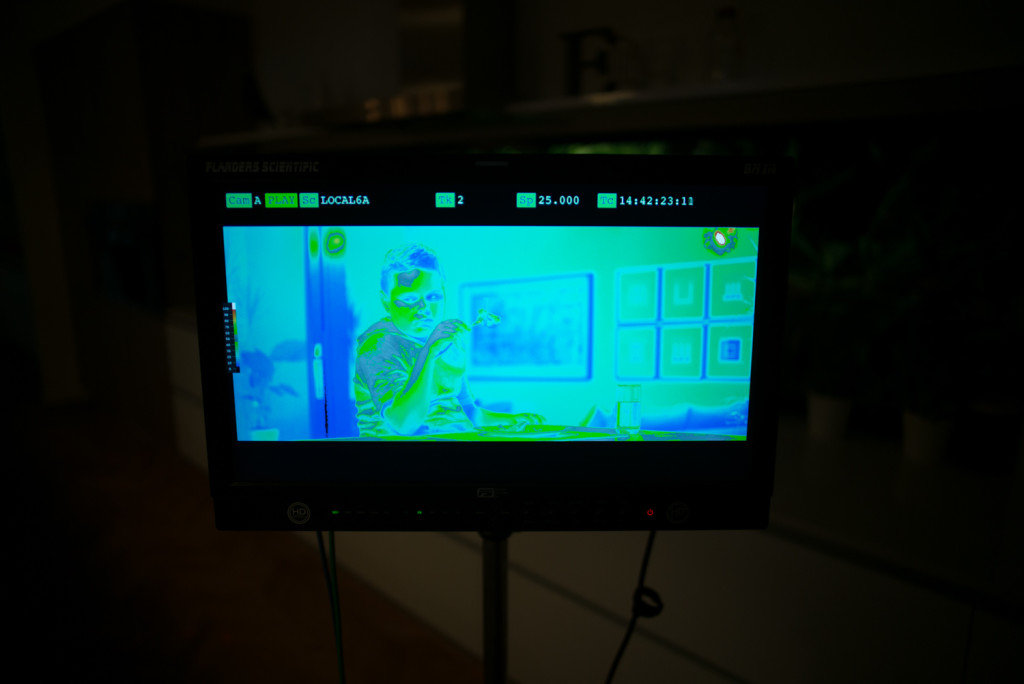 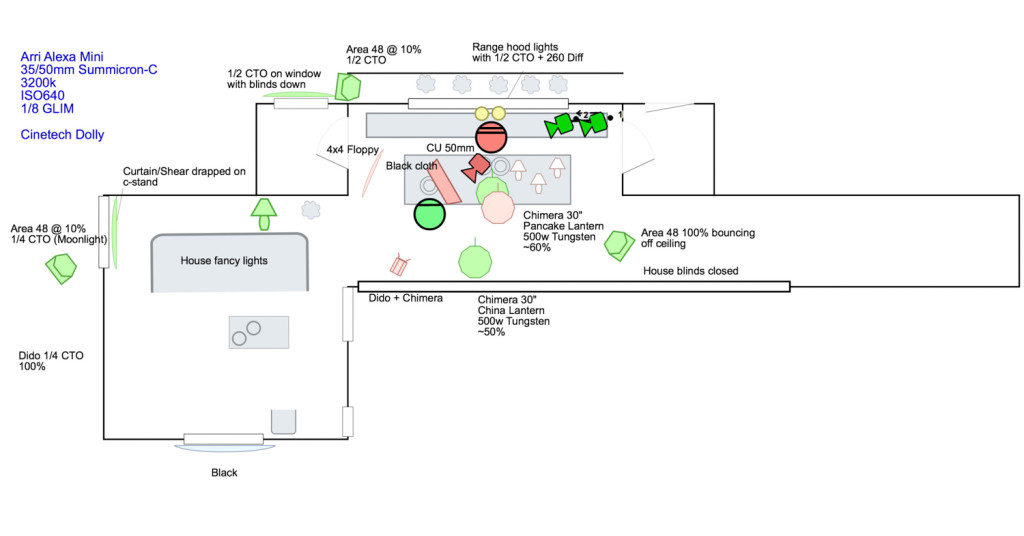 As the Art Department cocked up and a BBQ for another scene didn’t arrive, this front yard scene was bumped forward a few hours into the worst time of day to shoot.

The scene was simple with one angle of our hero standing in the front yard with a bit of action going on behind him and another shot from the same angle with our female hero in the same spot.

We couldn’t shape the sun with as much precision as we did in episode #62 because there was a tree in the front yard. This meant we couldn’t get the wrap around qualities as we did in #62 and had to go a different route.

The 12k was moved into position on the sidewalk and put through a 12×12 full grid. For fill we had a tree and a 4×4 poly where we could fit it.  At this point, key was f16, fill f11, the background (directly behind the hero) at f11.  The kicker was that the backlight was between f45-f64 with light cloud coming in and out.

We brought in a 4×4 frame of Hampshire frost for the closeup but for the wide, getting anything up and over the frame seemed in possible. But maybe the Shakuhachi had meant the Gaffer transcended common lighting technique…we thought it couldn’t be done but he redeemed himself righteously and managed to get a 4×4 frame of Hampshire Frost up and over with a scaff pole balanced with a shot bag.

This brought the backlight down to f32.5 and within range of the key.

The final moves to get the first shot of the commentator out of dog shit territory was move the 12×12 as close to hero as practical, move him slightly closer to the tree as a ratio of 3 stops under for his guys face looked really nice. We shot with levels of f22/f8.

The same was repeated for a female hero with a part of art department messing with the background. 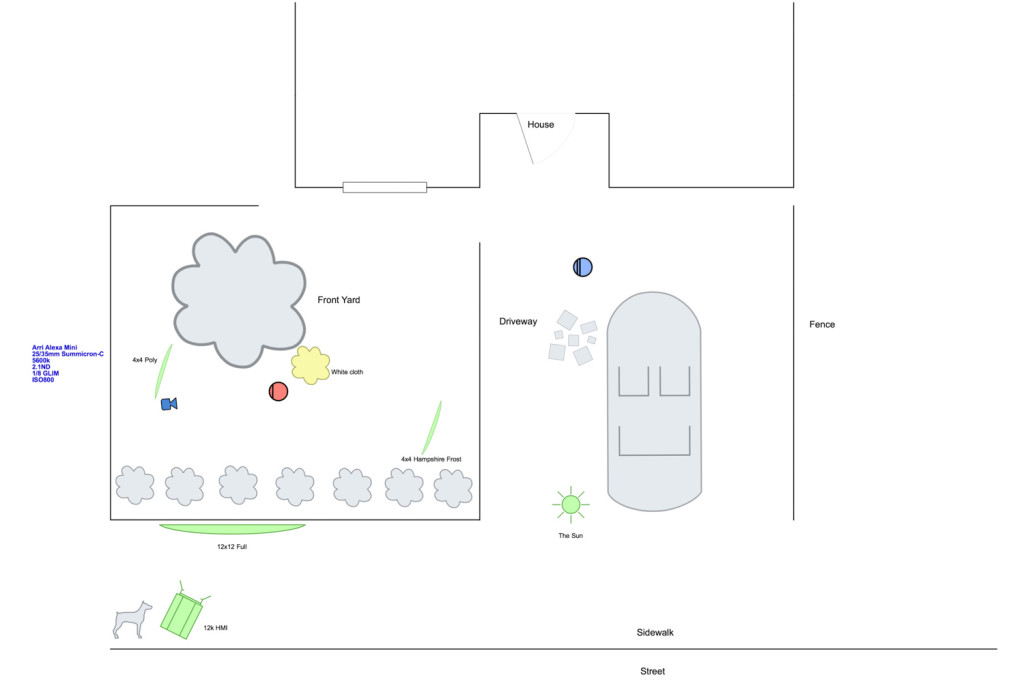 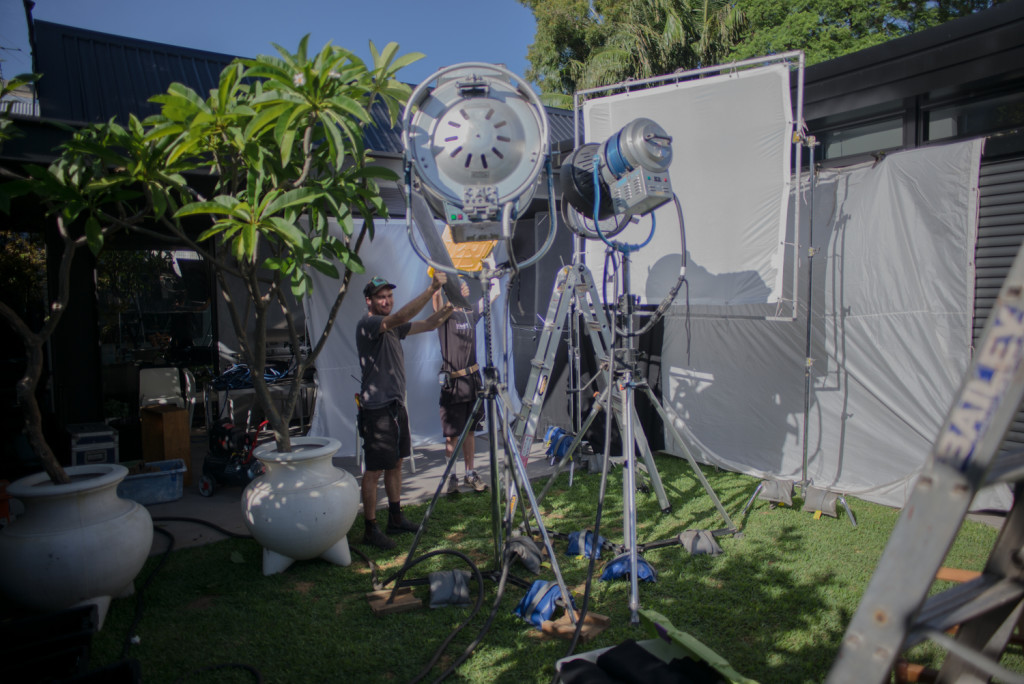 6k cut out and needed some extra attention – Gaffer wasn’t happy about his secret wafter being shared with the world. 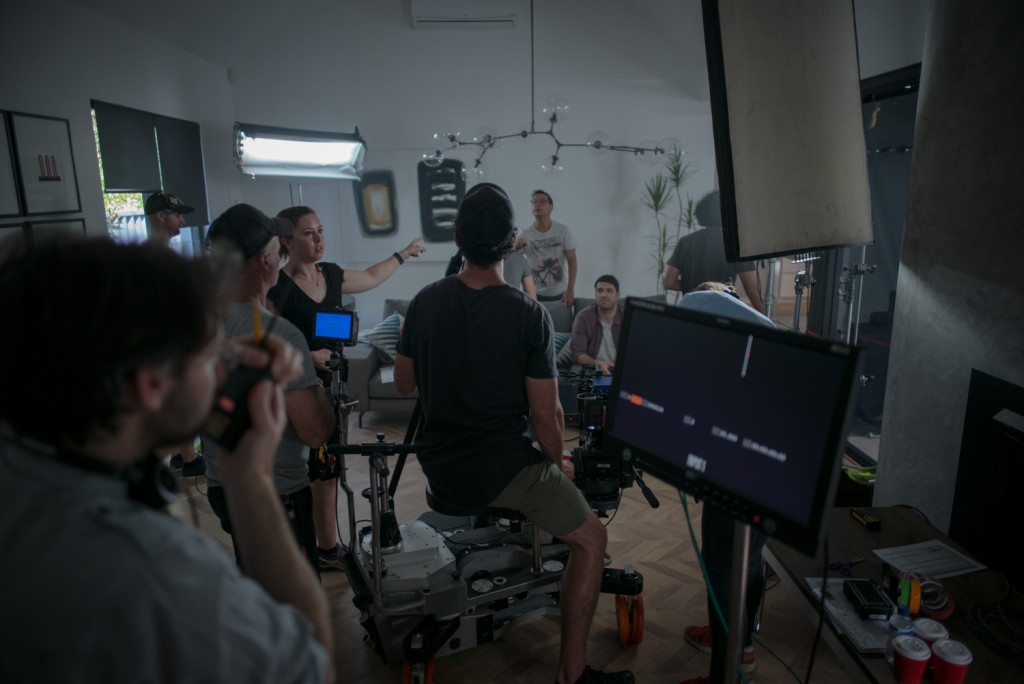 “McKenzie, the split is down again” 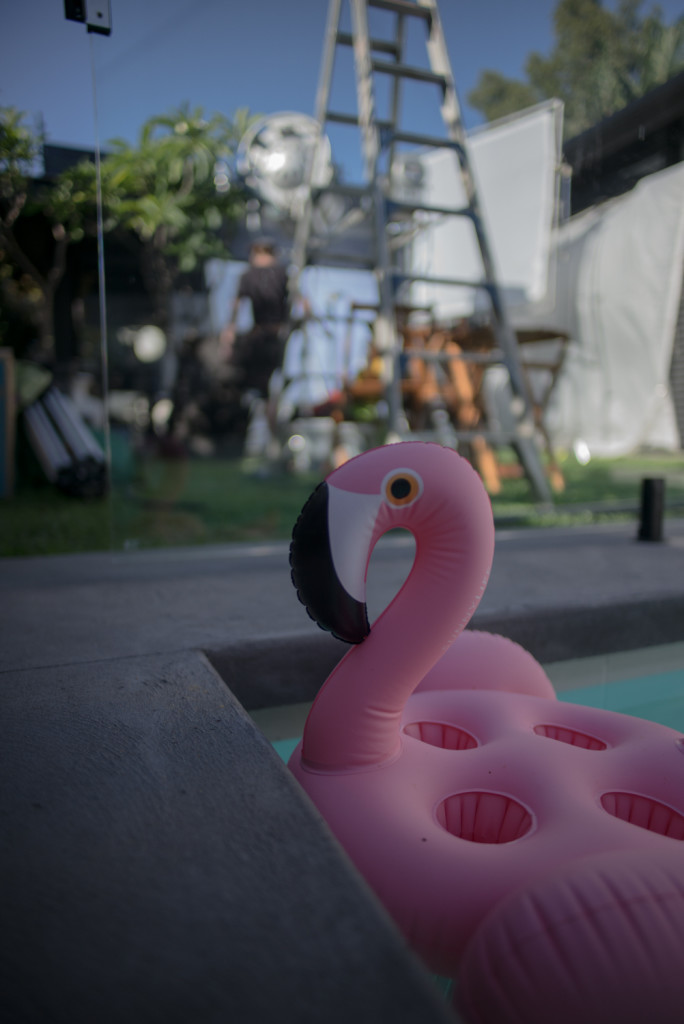 He always finds an animal. 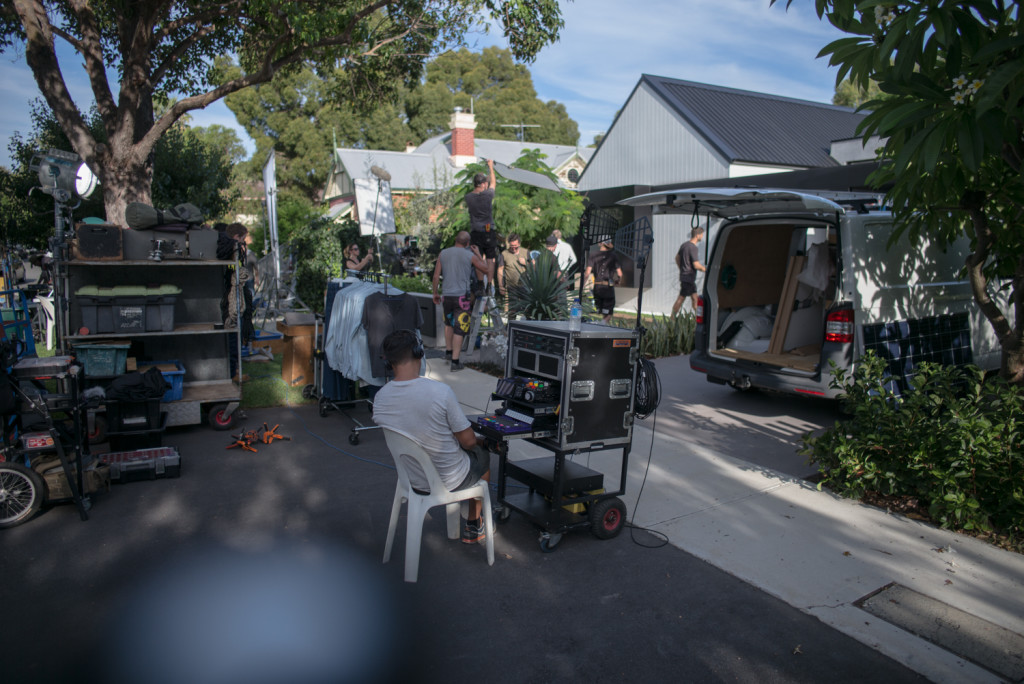 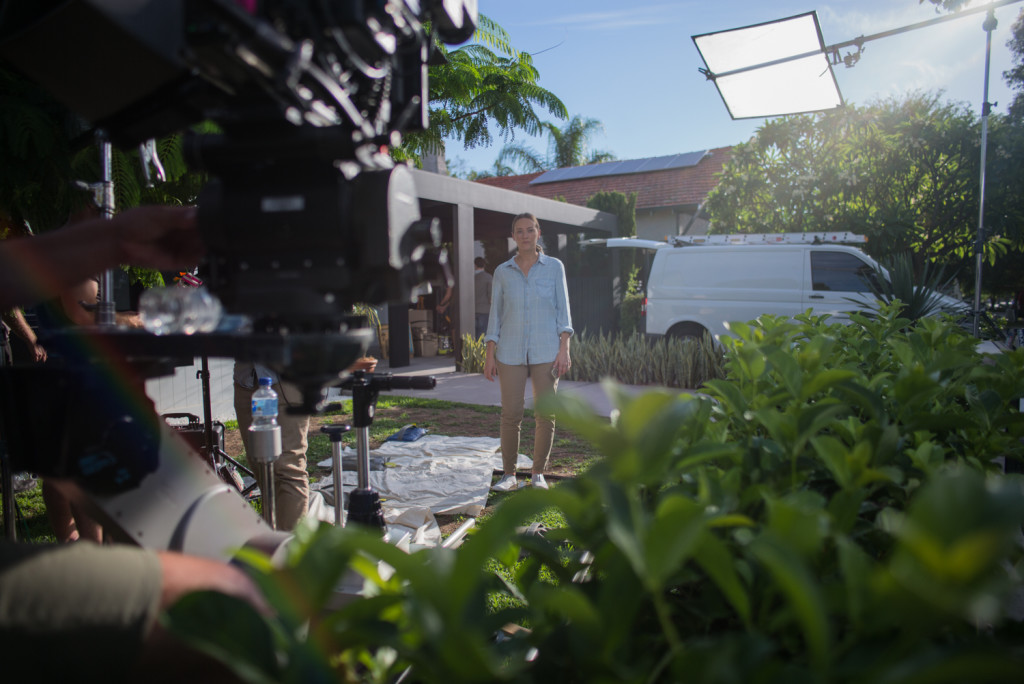 Booming from the street. 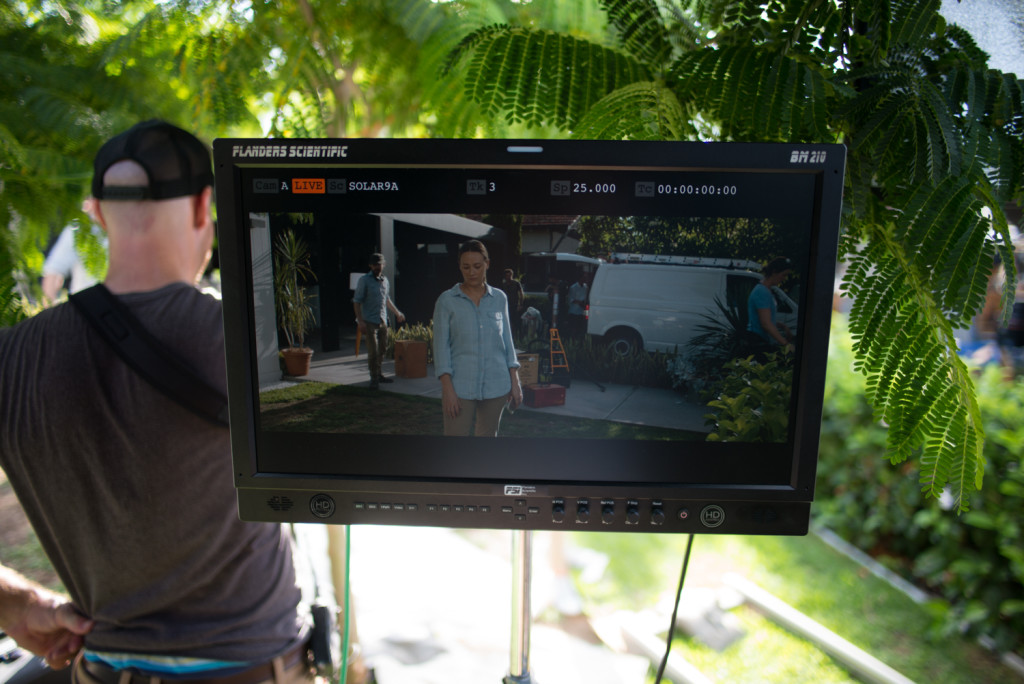 Not sure I’d be standing under there.