On the show this week we look at a retail cinematography job, the way we shot it, the equipment we used and more.

Not all jobs are action packed, creatively fueled masterpieces.  Some commercial jobs require skills and technical expertise to bring them to life.

In this episode we go over a straight to camera tvc that we tried to make look as polished as possible.  You can't always go dark and moody when you are selling things and in today's example we had to embrace a different set of style guidelines.

In today's world of fast moving technology, ever changing camera markets, and the plethora of choices it can be challenging navigating the financial questions that go along with being a cinematographer.

I recently purchased an Arri Alexa XT Plus and in this week's Patreon podcast I try and breakdown the financial and practical considerations I went over when buying the camera.

The process took a few months and it was always a bit touch and go but in the end I lay out why the decision works for my position now and going forward.

To listen to the podcast click the link below:

The ad we are looking at today consisted of a series of individuals talking directly to camera while walking through a family home.

The brief was to keep things from looking to moody but at the same time try and create some layers of depth.

Time was against us as we had a lot to fit in and the weather wasn't much a help either. Bright and sunny is what we wanted and cloudy and grey is what we got. 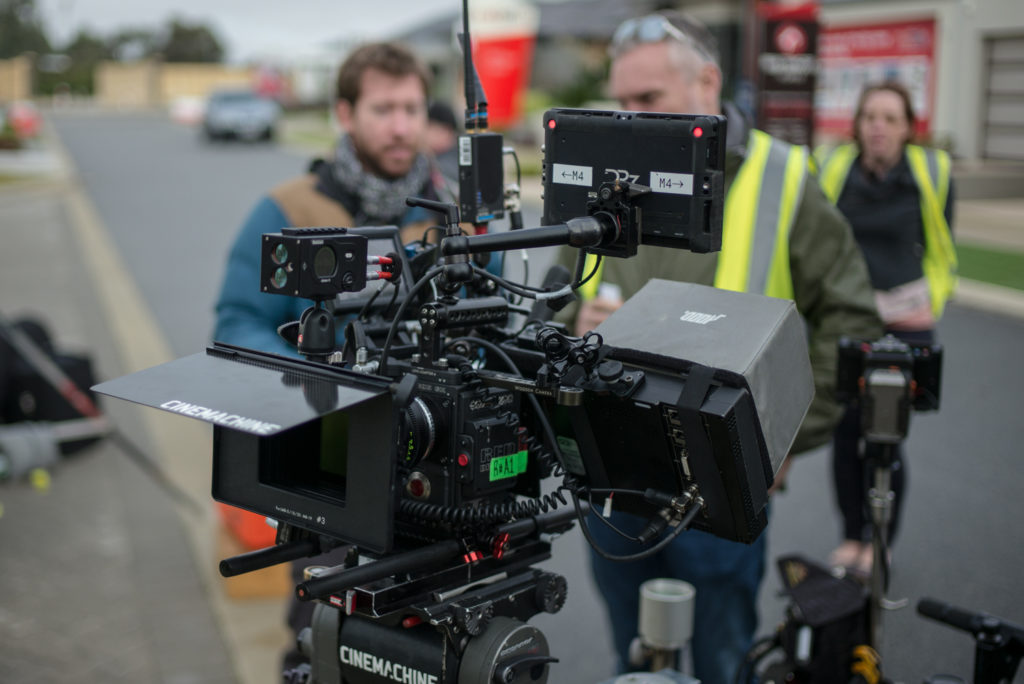 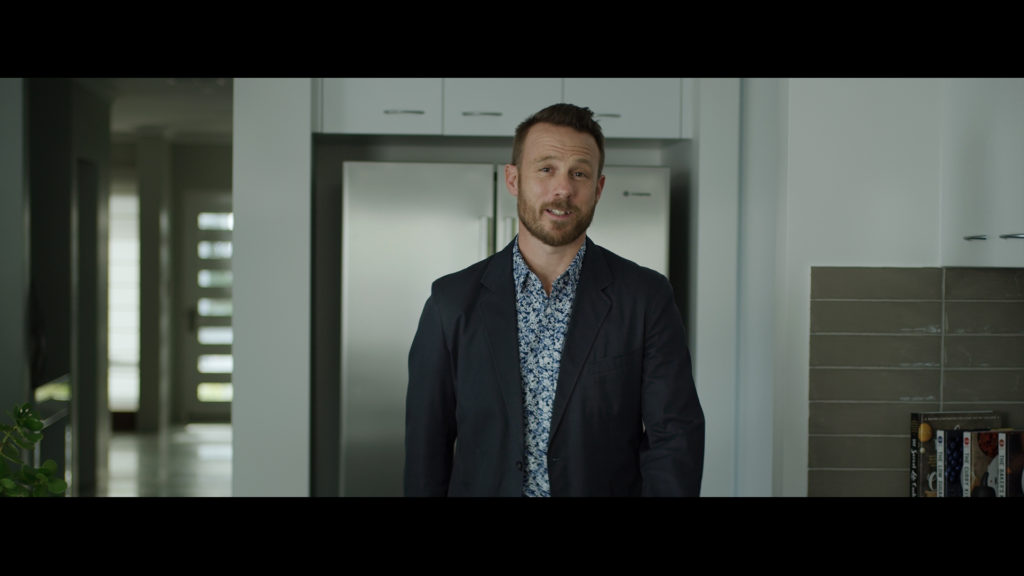 In this shot we see a man walking towards camera in a typical family kitchen.  He is talking to straight to the viewers.

Inside this kitchen we had a whole series of shots.  To be able to get all the shots done in the time we had it was imperative we light once and make sure we weren't lighting for every angle.

To do this we used two large HMIs (a 12k and a 4k) from outside and softened them with 12x12 diffusion to help spread the lamps.  Once we had the blocking down we made sure to bring ther lamps from the correct angle to keep some shape on the talent and the house. 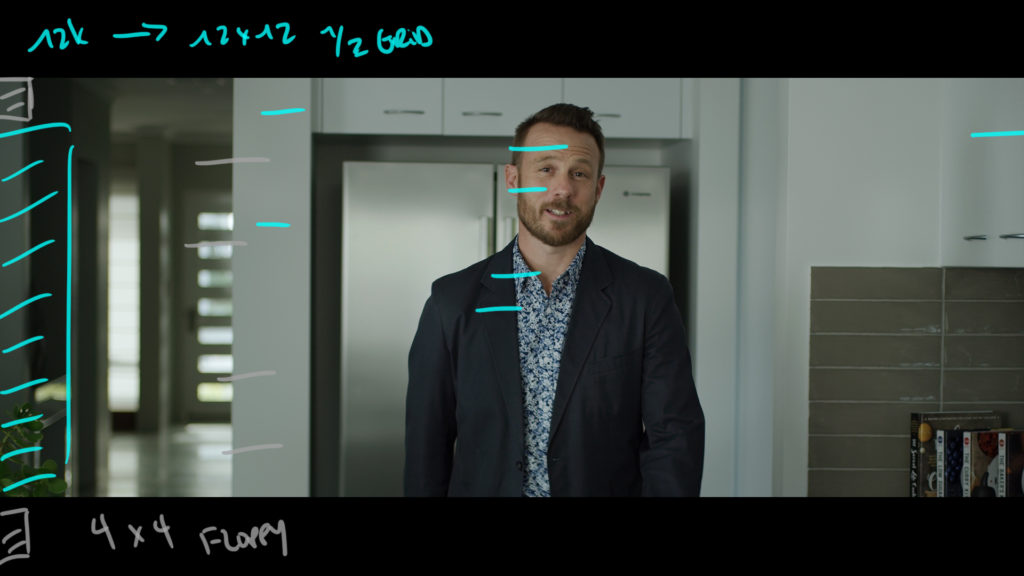 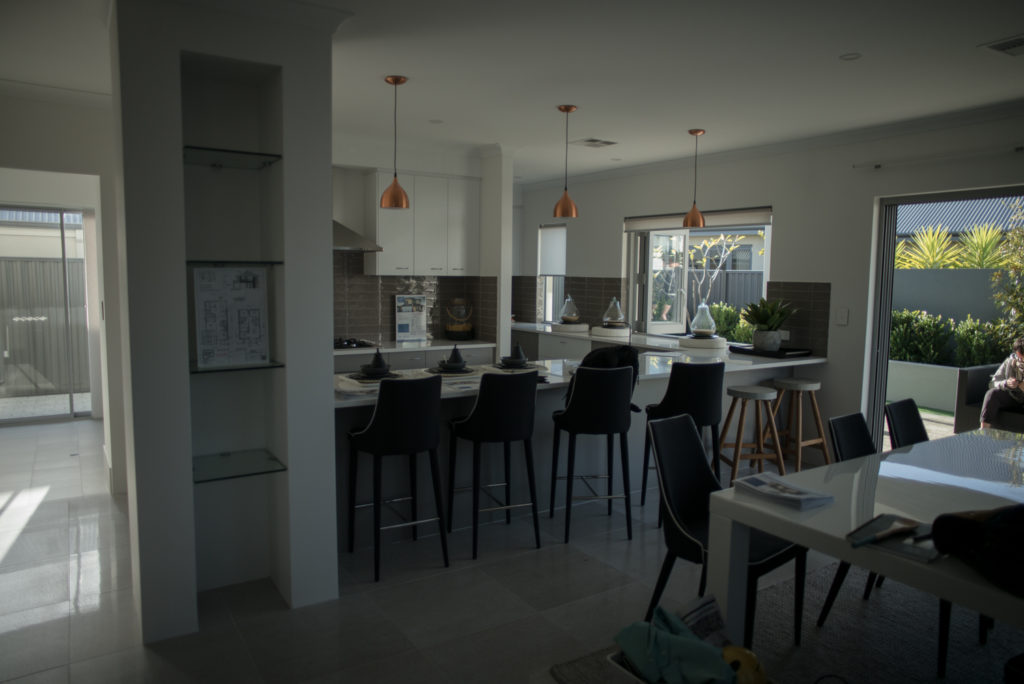 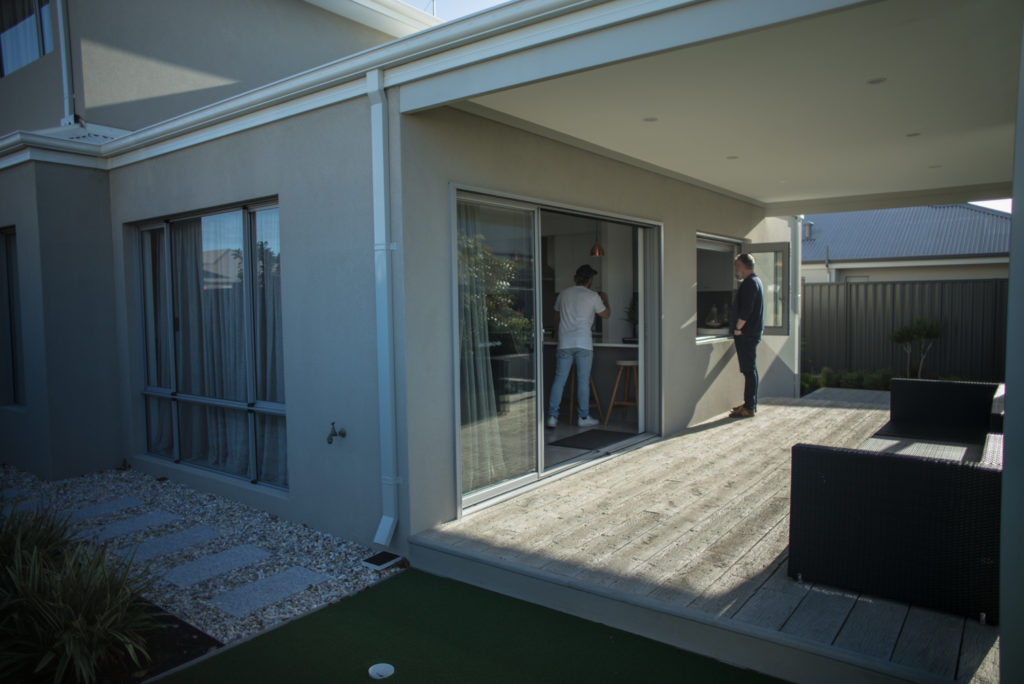 Jump to the Wide 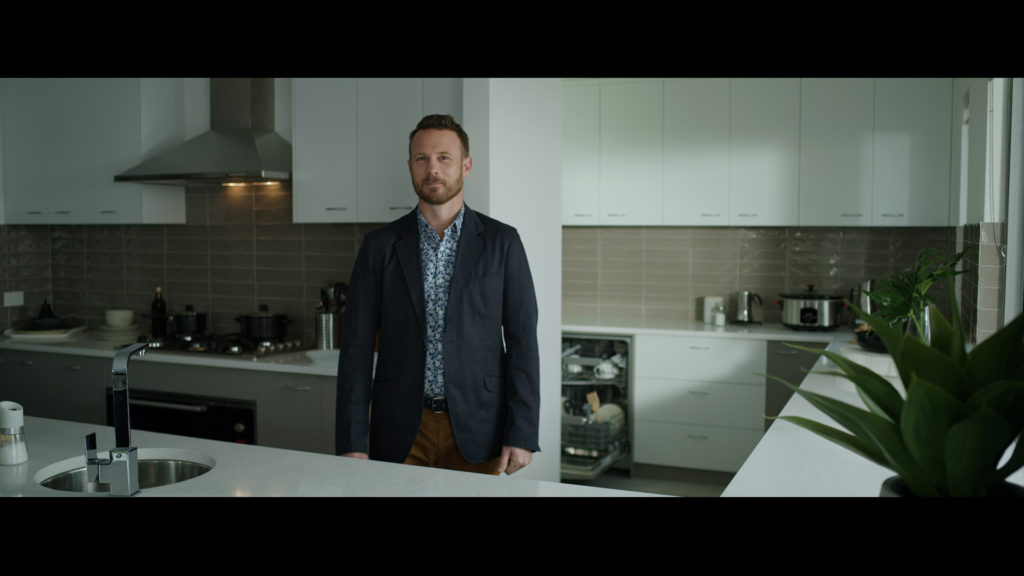 The next shot we pick up our talent as he lands in the corner of the kitchen.  He is still speaking to the camera but is now settled in his spot.

For budget issues and to keep costs down We moved the same two lights we were using in the previous frame further along the house and broought the 12k from the opposite side.

Doing so created the nice highlight in the BG and gave the talent some shape on his mark. 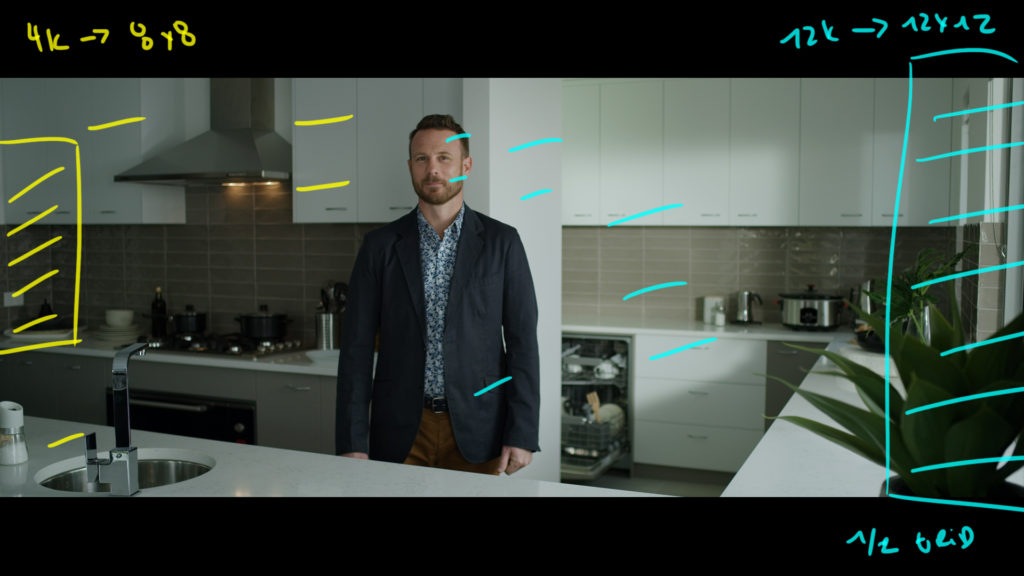 Sun in the Clouds 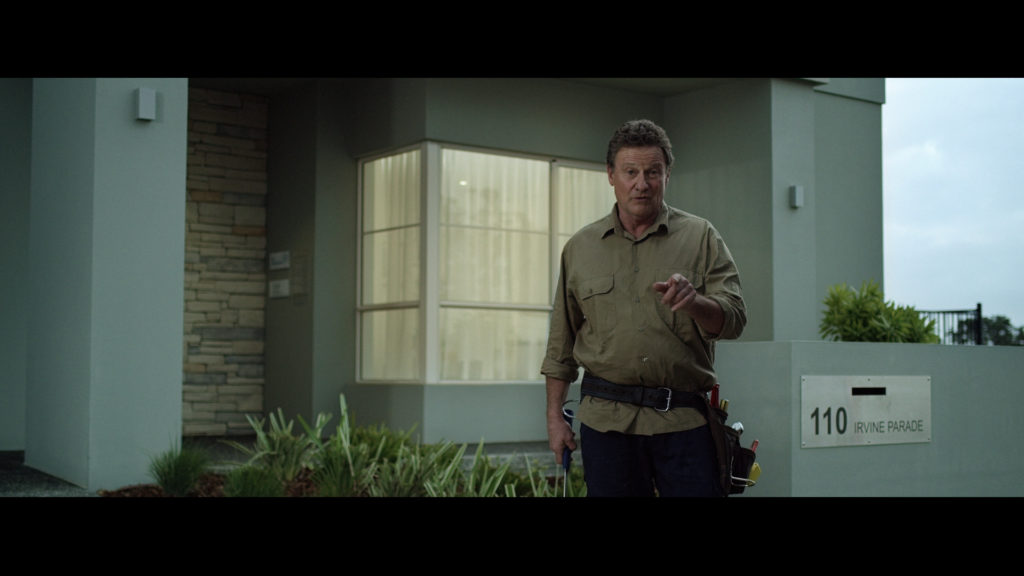 This shot was the spokesman at the front of a family residence.  We needed it to be a little bit of a dusky feel so we could feel the interior lights on.

We saved this shot for the last of the day and chose a house that was east facing so the sun would be backlighting the house.

The clouds rolled in and killed the sun so we had to bring in our own sources to keep the levels and density consistent.  We used a gelled M18 inside for some warmth and a 12x12 of neg for some shape outside. 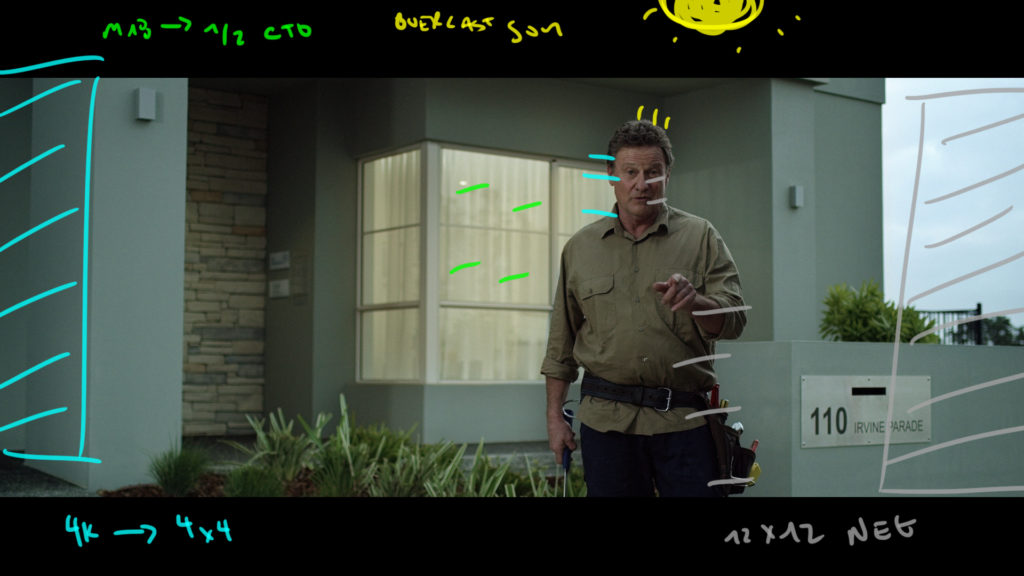 The Morning Close Up 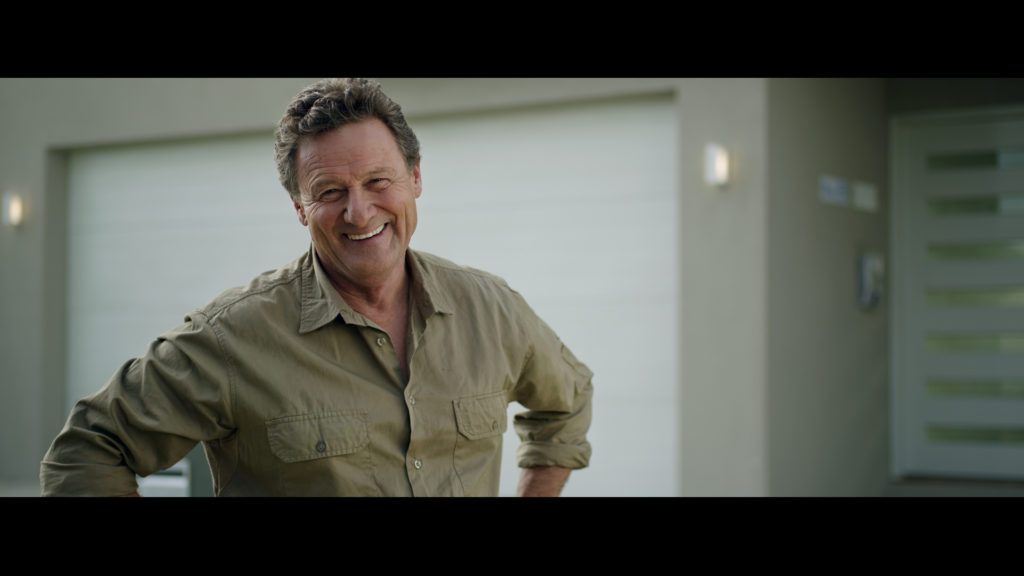 This was the introduction to the spokesman.  He is standing in front of a house as the morning sun comes up in the BG.

The weather was definitely not playing ball for this shoot and in this example we needed to wait for the only glimpses of sun that ever came to help pull this shot off.

We had an west facing home with the sun behind it in the morning.  The backlight (when it was there) took care of the BG and then for the talent we used a 12x12 Ultra bounce and a bit of neg fill to shape his shadow side.

The sun refused to come out except in small patches and this grab is from a high cloud section.  You can see how soft the sun is by looking at the quality of light in his hair.  That light is straight overcast sky light. 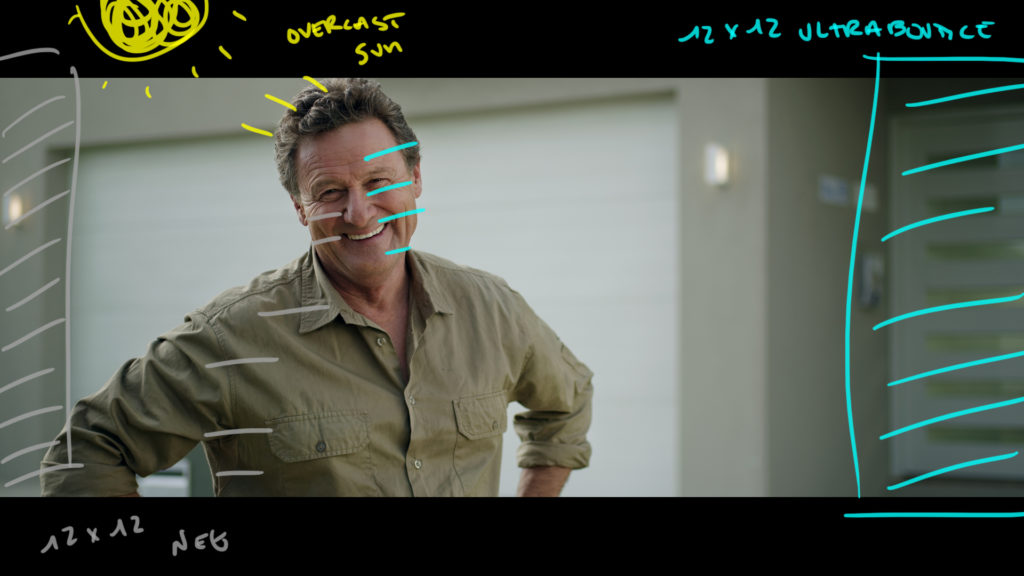 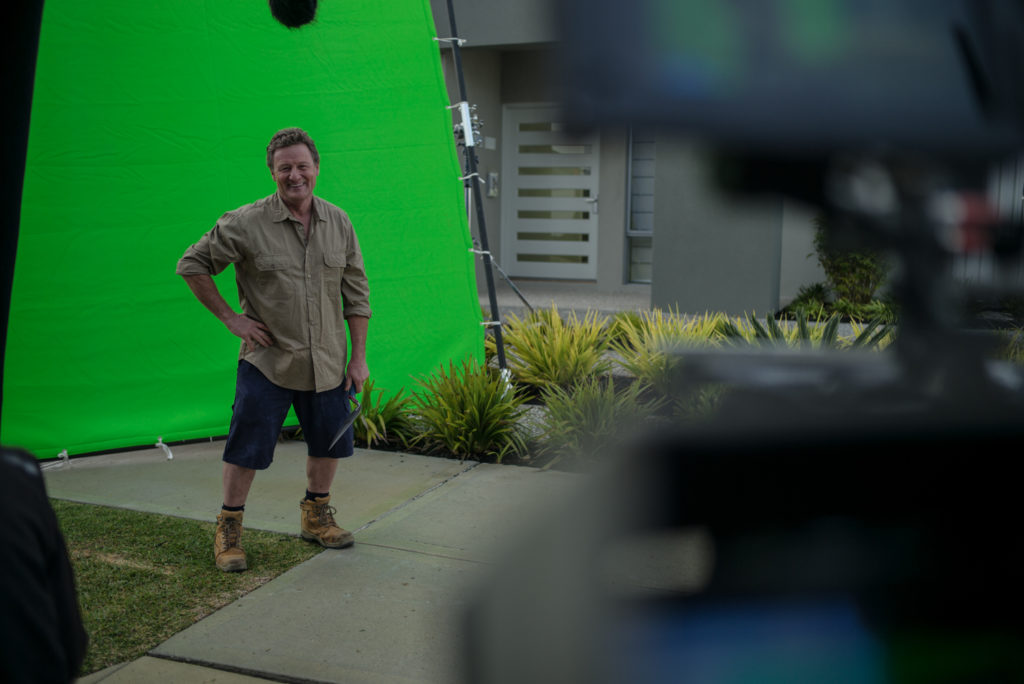 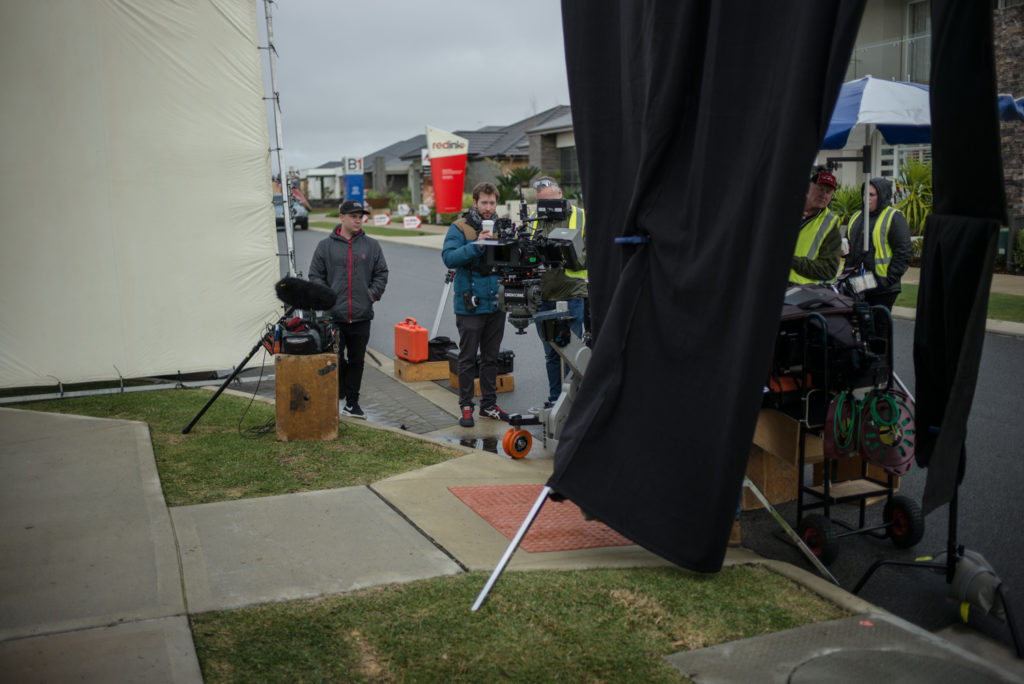 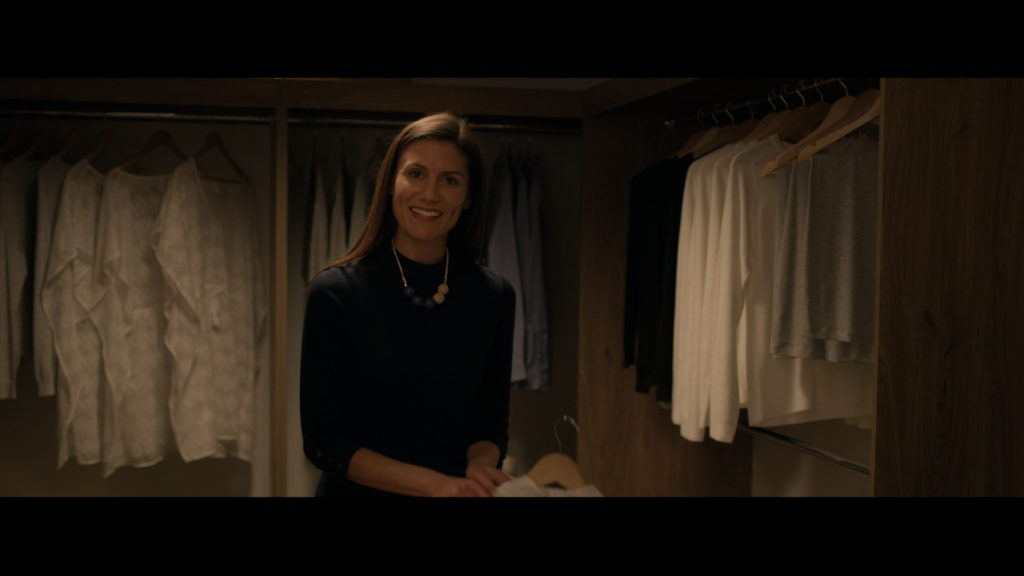 This series of shots was in a walk-in closet set at night.  Nothing like lighting a small white box, with more hanging white clothes, and trying to make it feel rich.

We had zero time and even less space to pretty these shots up.

We had one Area 48 LED stuck in an attic hole in the middle of the room.  We wrapped 3 sides with black wrap to keep it off the walls and then positioned some 4x2 polys on either side of the camera to throw some of the Area 48 bounce back on to our talent. 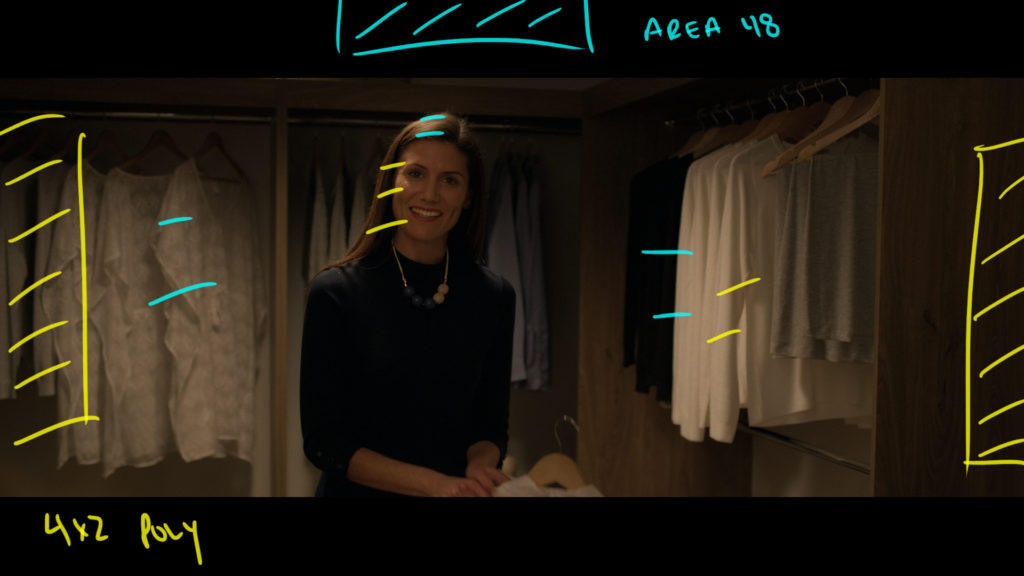 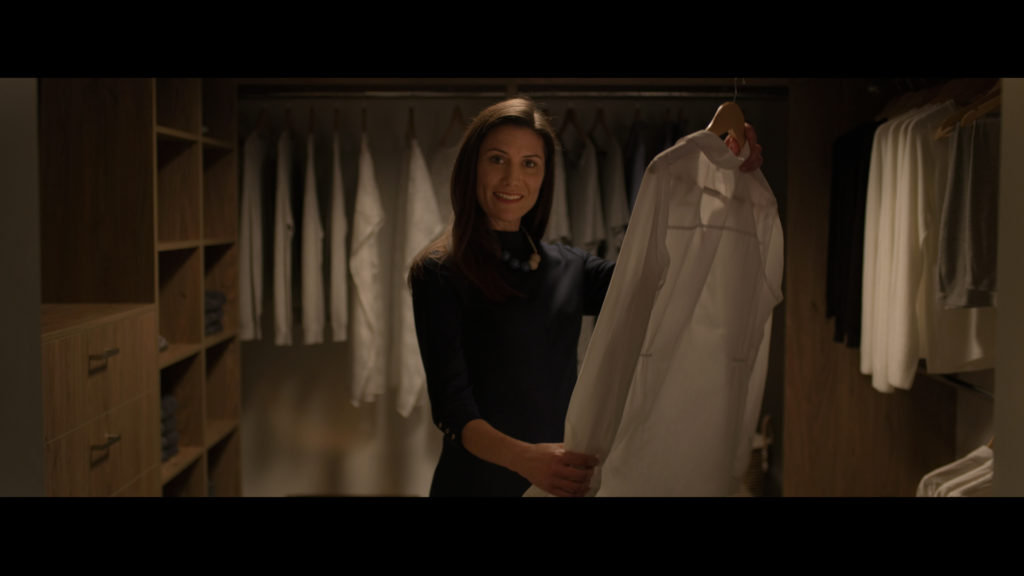 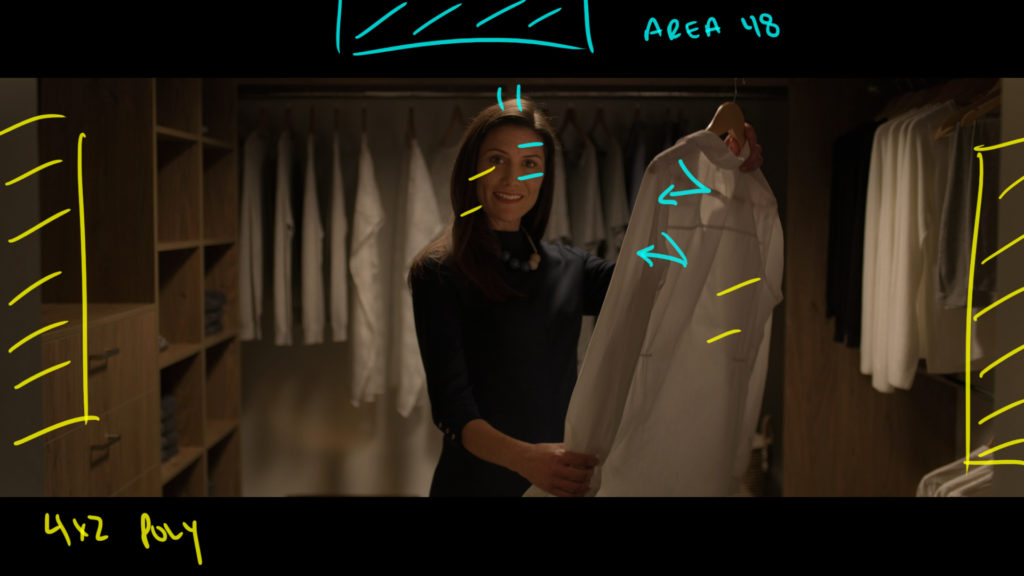 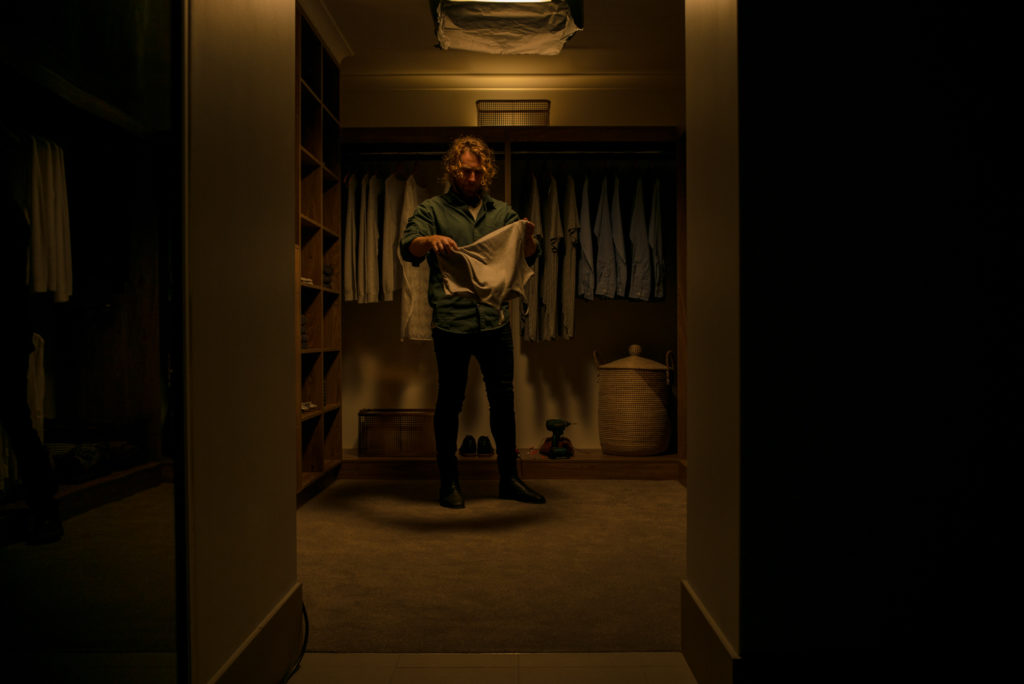 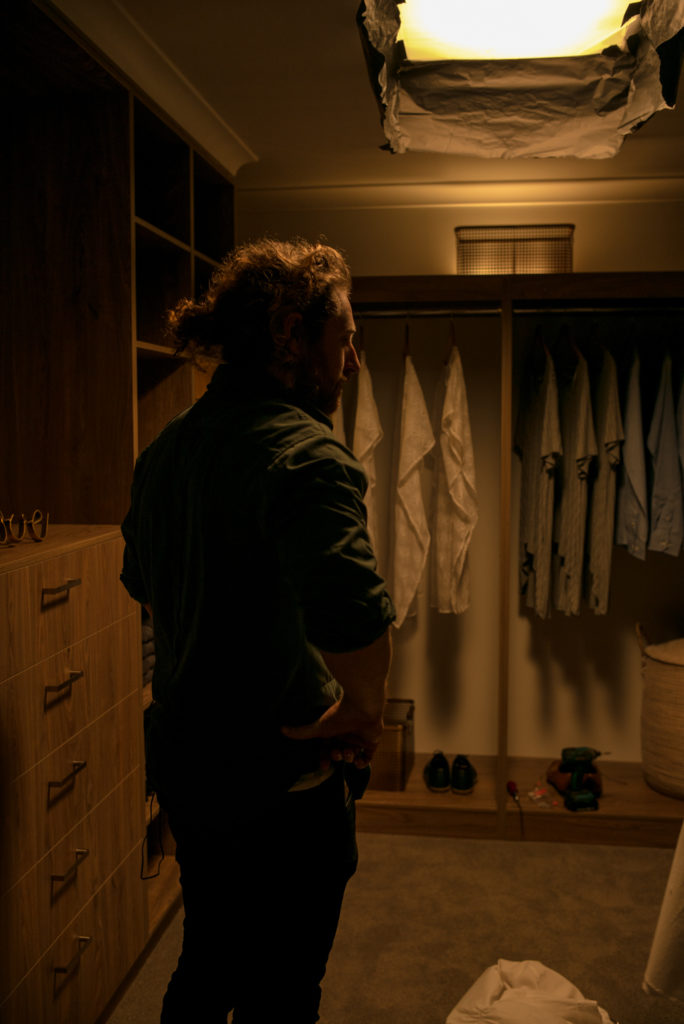 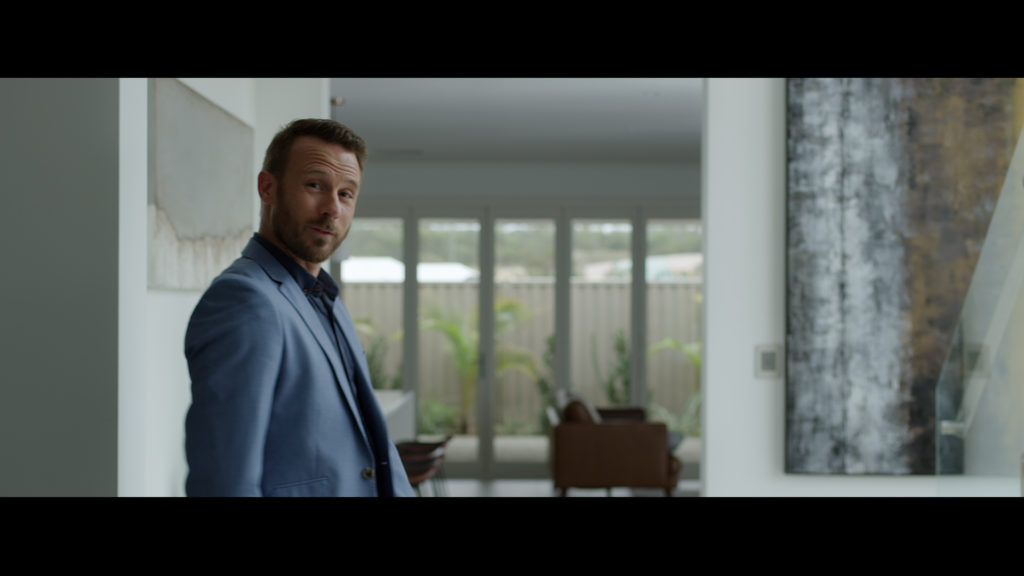 Yet another shot of the talent popping in to frame addressing the viewers straight to camera.  The talent enters screen left and then we watch as he walks further down the hallway away from us.

Just to keep it consistent with the rest of the shoot the clouds came and went at random.  When we wanted clouds we got sun, and when we wanted sun we got clouds.

We needed some brightness to these white walls so again we brought in the 12k and 4k combo we had used previously.

We blasted the 12k through a 12x12 laid up against a series of floor to ceiling windows on camera right.  To create some shape we blocked a few of the white walls not in shot in black so there wasn't as much bounced light reflecting back into the scene.

Then in the BG room of the house we had a 4k through an 8x8 for some ambient fill. 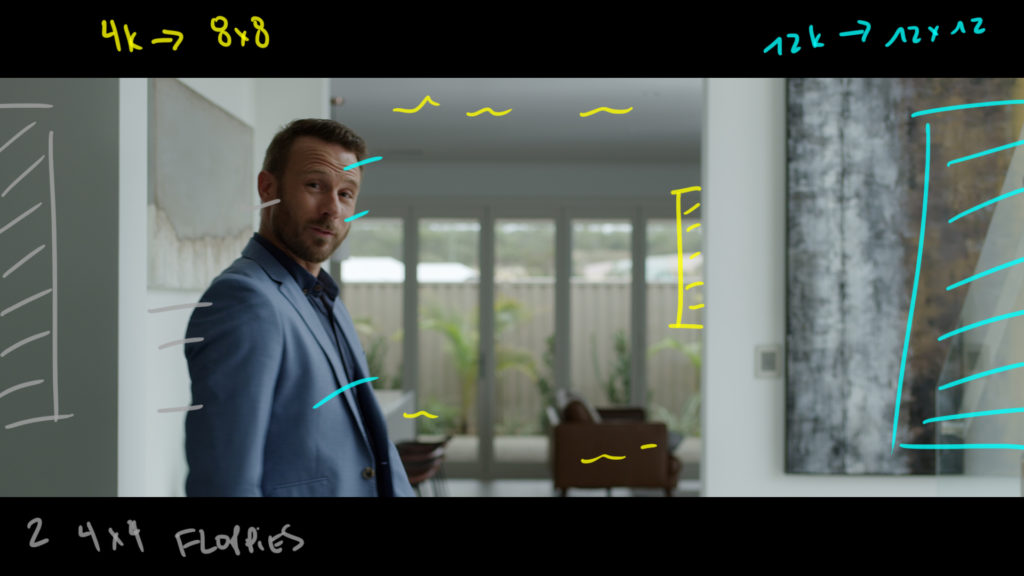 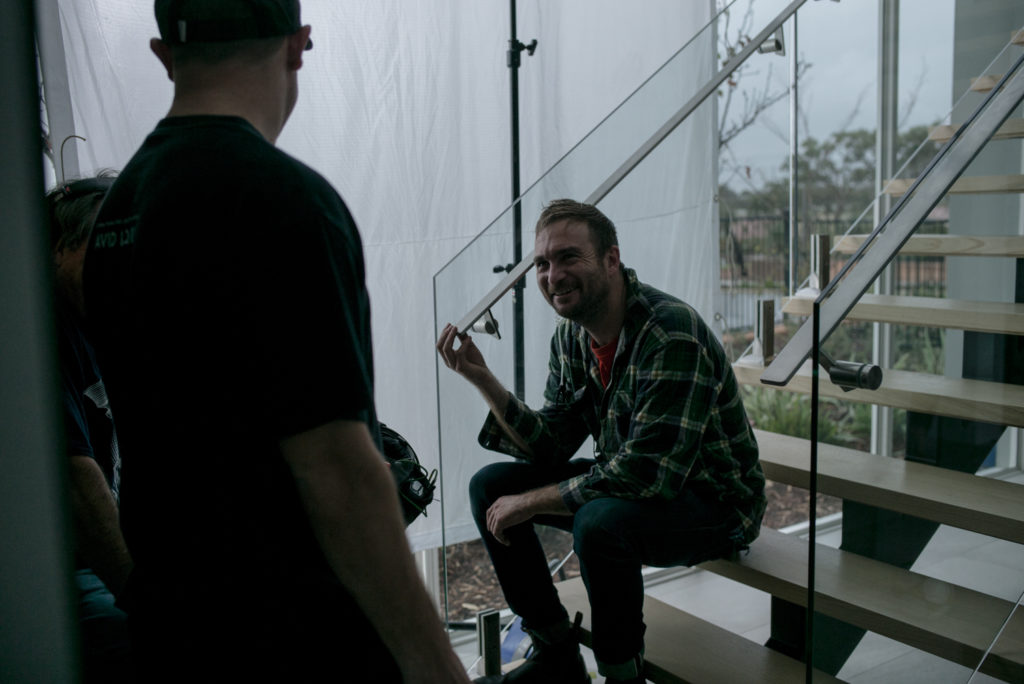 The gaffer laughing at his best boy's poor luck as he has to hang a 12x12 outside in the rain.

Flipping Around - The Reverse 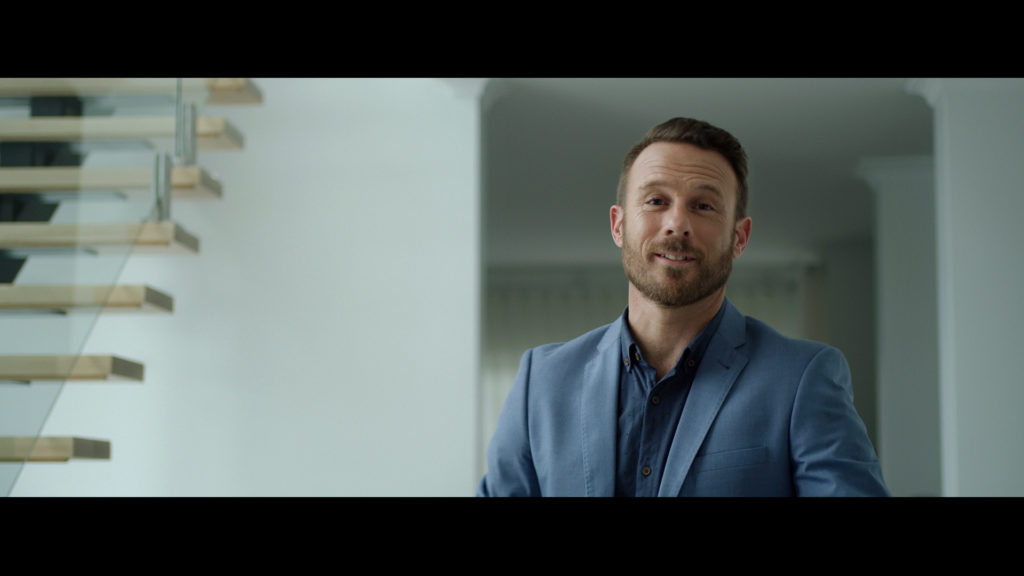 The reverse continuation of the previous shot.  Now the talent is walking towards the camera as it tracks back on the dolly with him.

Same as above but we brought the floppies directly behind the camera to kill any frontal spill that was washing out the contrast on our talent's face.

We also swung the 4k around, put it outside, and through a window camera left for the BG ambient. 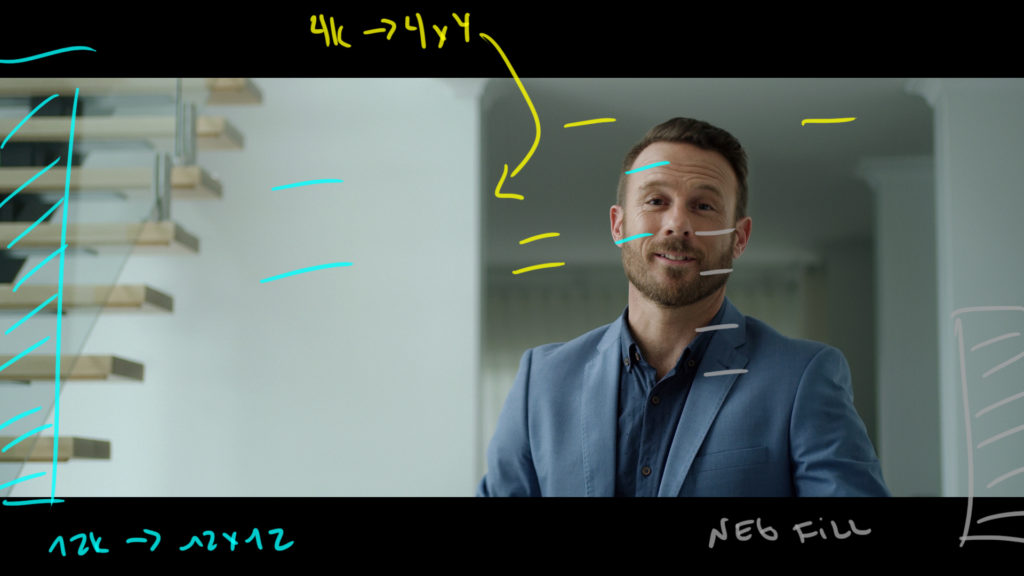 Commercial work in this range presents it's own challenges and working on projects that may not directly align with your personal aesthetic can sometimes be fun for just that reason.

As long as you are learning and experimenting with every set up you've got a reason to be on every job.