The title of this one might be slightly misleading.

In DP speak "All In Camera" can at times translate to not much in camera.

In this episode of the podcast we look at a green screen heavy shoot we pulled off in less than ideal conditions.

On the Patreon Video Breakdown this week we look at friend of the show Bryce Fortner's work on his latest I'm Your Woman.

There is some real beautiful cinematography throughout and we break down the scenes I like the most and go over why I feel they work best.

The film has a great style to it and I really enjoyed breaking down the components that went in to making it work.

All In Camera - The Spot

The idea of the spot is a team of computer techs work overtime in their futuristic office space to move the customer forward.

We shot on the Alexa Mini LF and we used Sigma Cine Primes.

The Location - A Shed 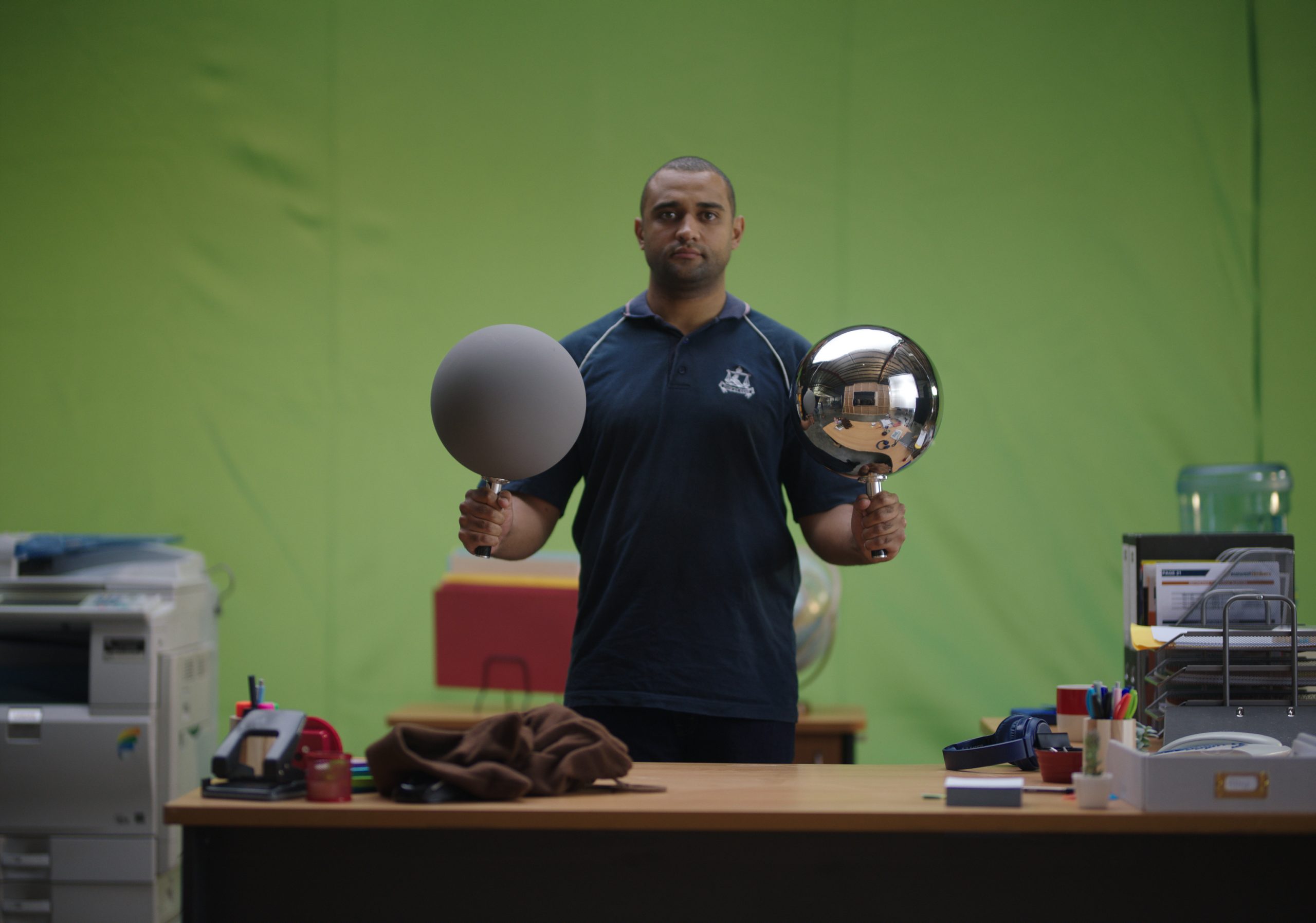 We shot the whole thing in a shed that is normally reserved for farm animal displays at the state fair every year.

Oh the glamour of the film industry.  Here in Perth there is a serious lack in fully equipped studios so we had to make due with a warehouse.

This meant no grid and no existing power which complicated what we could do and how much time it would take to set up. 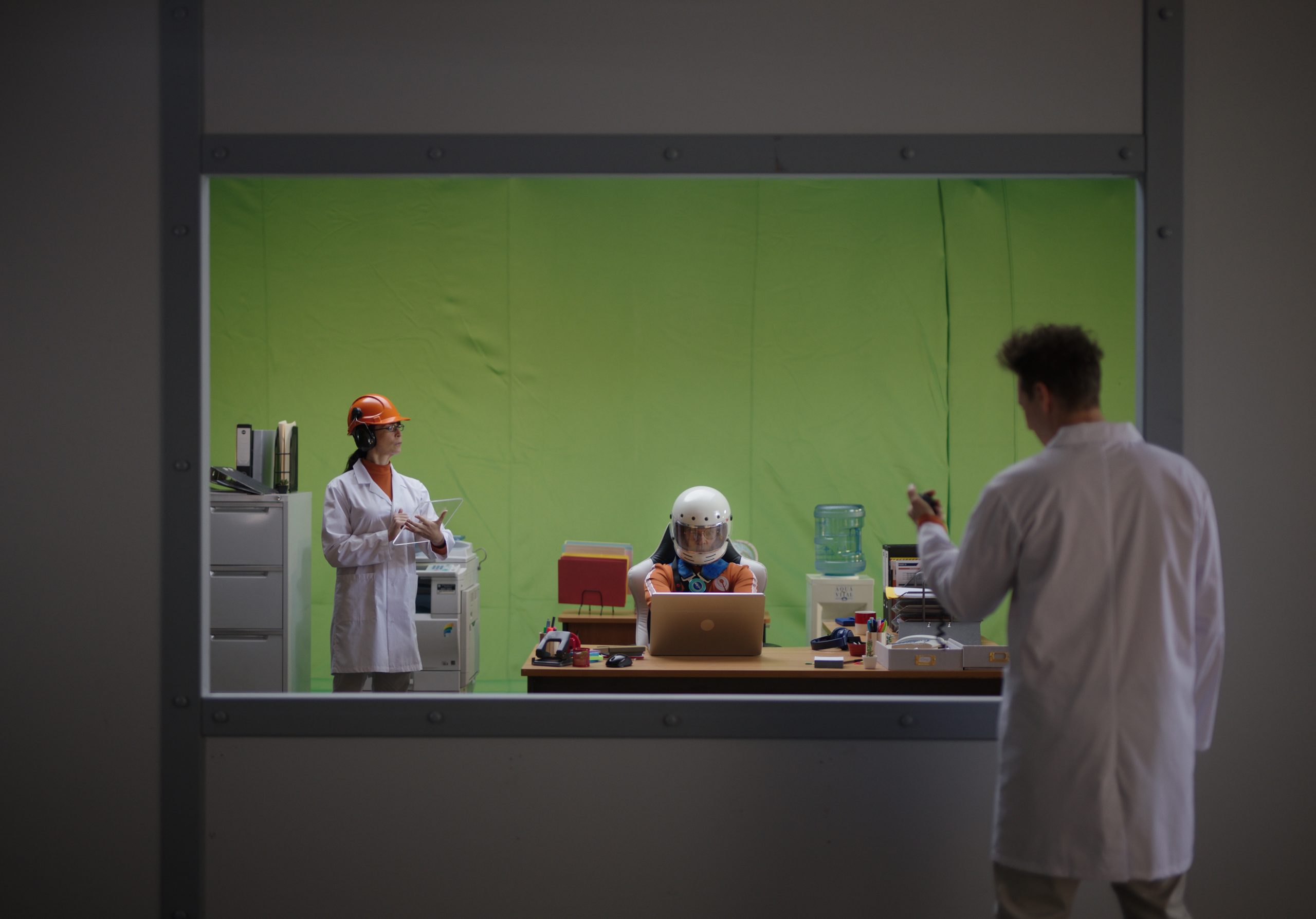 The geek squad works away in their compound.

We had a 12x20 of Ultra Bounce over the top of the set and that was being lit from the ground with two 4k HMIs.

Ideally this would have been done from above and it would have been gridded to control the spill.  Even better if it was RGB tuneable with a Skypanel or something like that.

But no studio means no grid which translates to doing the easy thing the hardest way.

Outside we had an old school Tungsten Maxi-Brute with CTB to match up with the overhead HMIs plus another 4k off to the side camera right going through a 12x12 to soften it up. 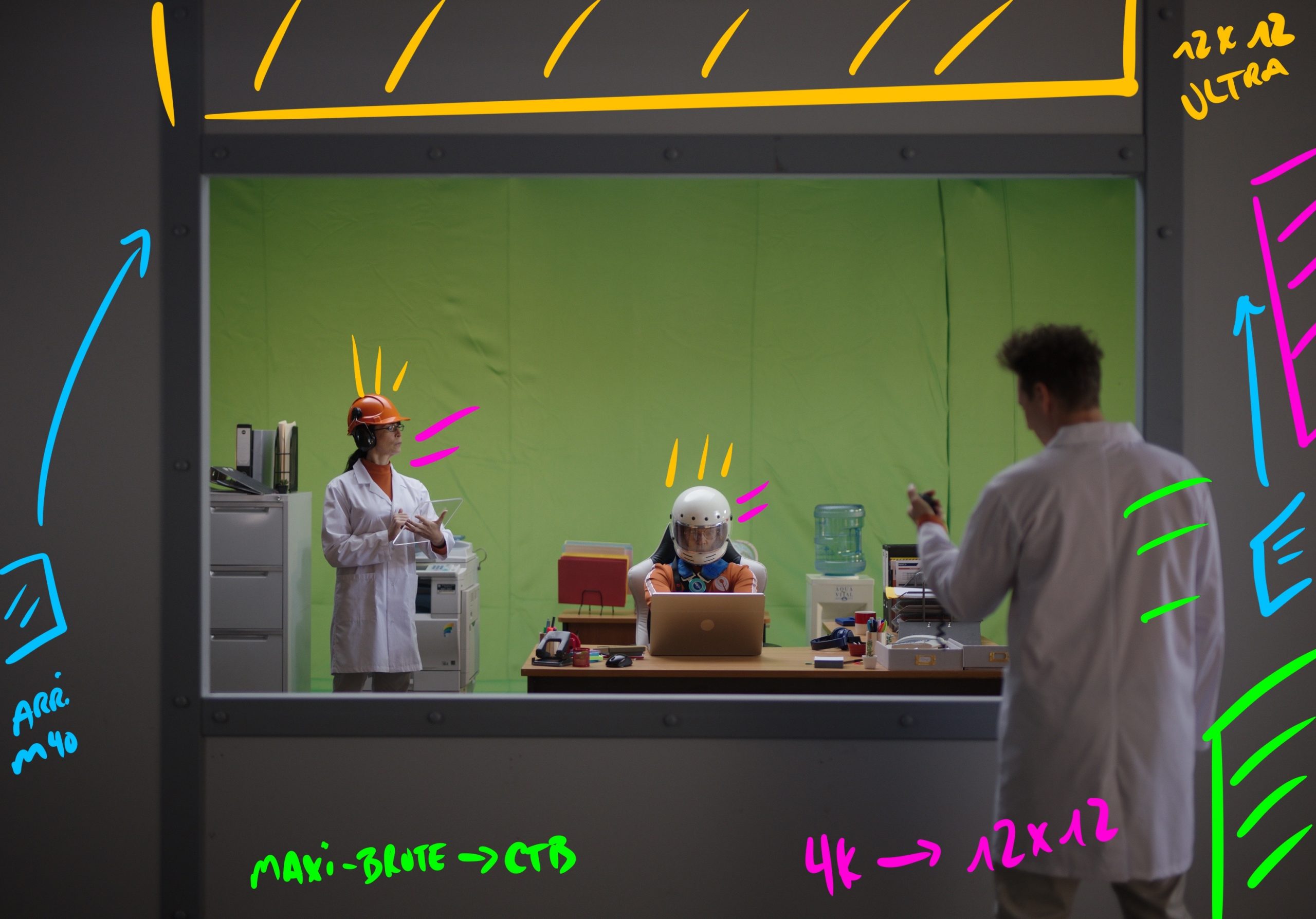 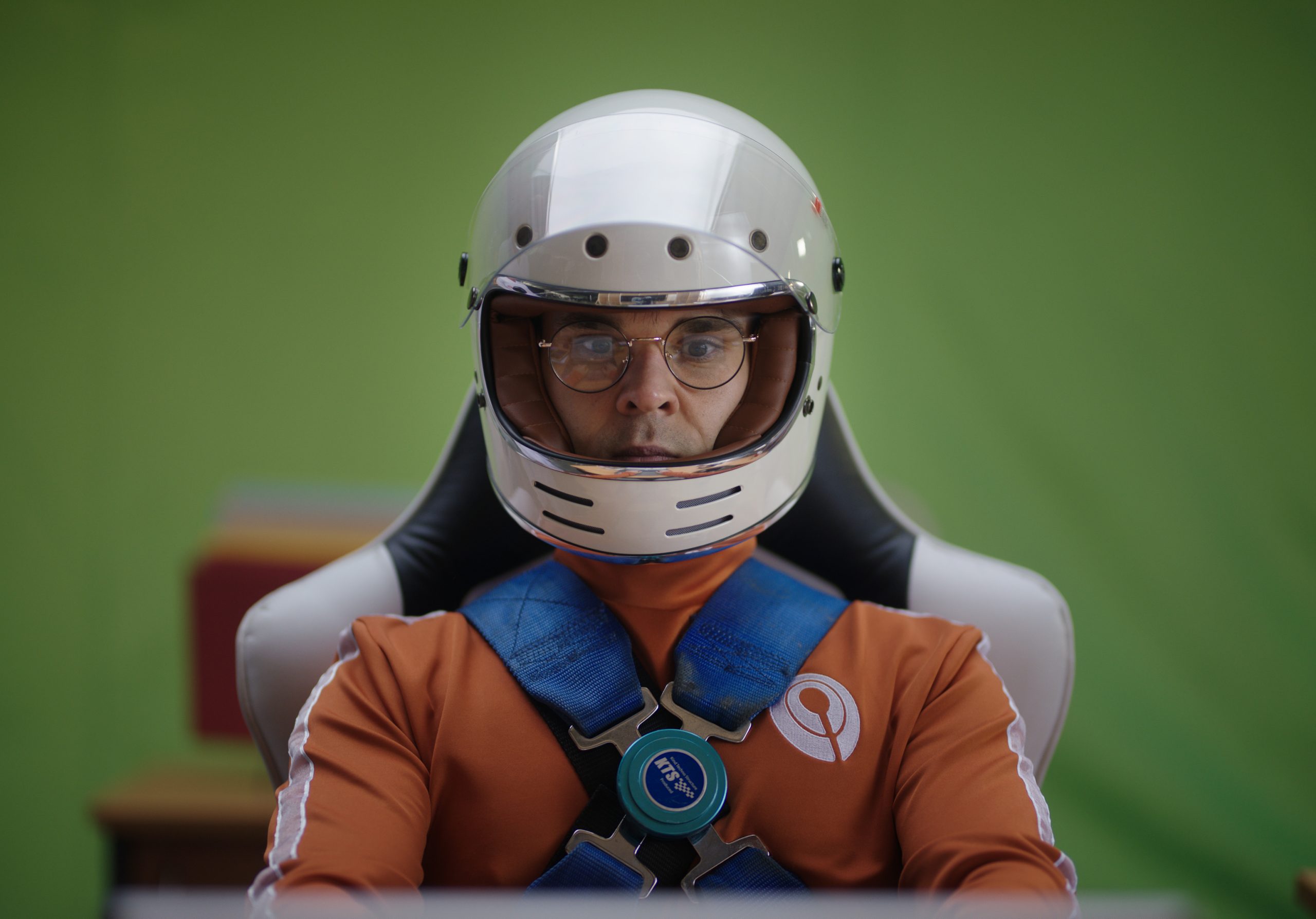 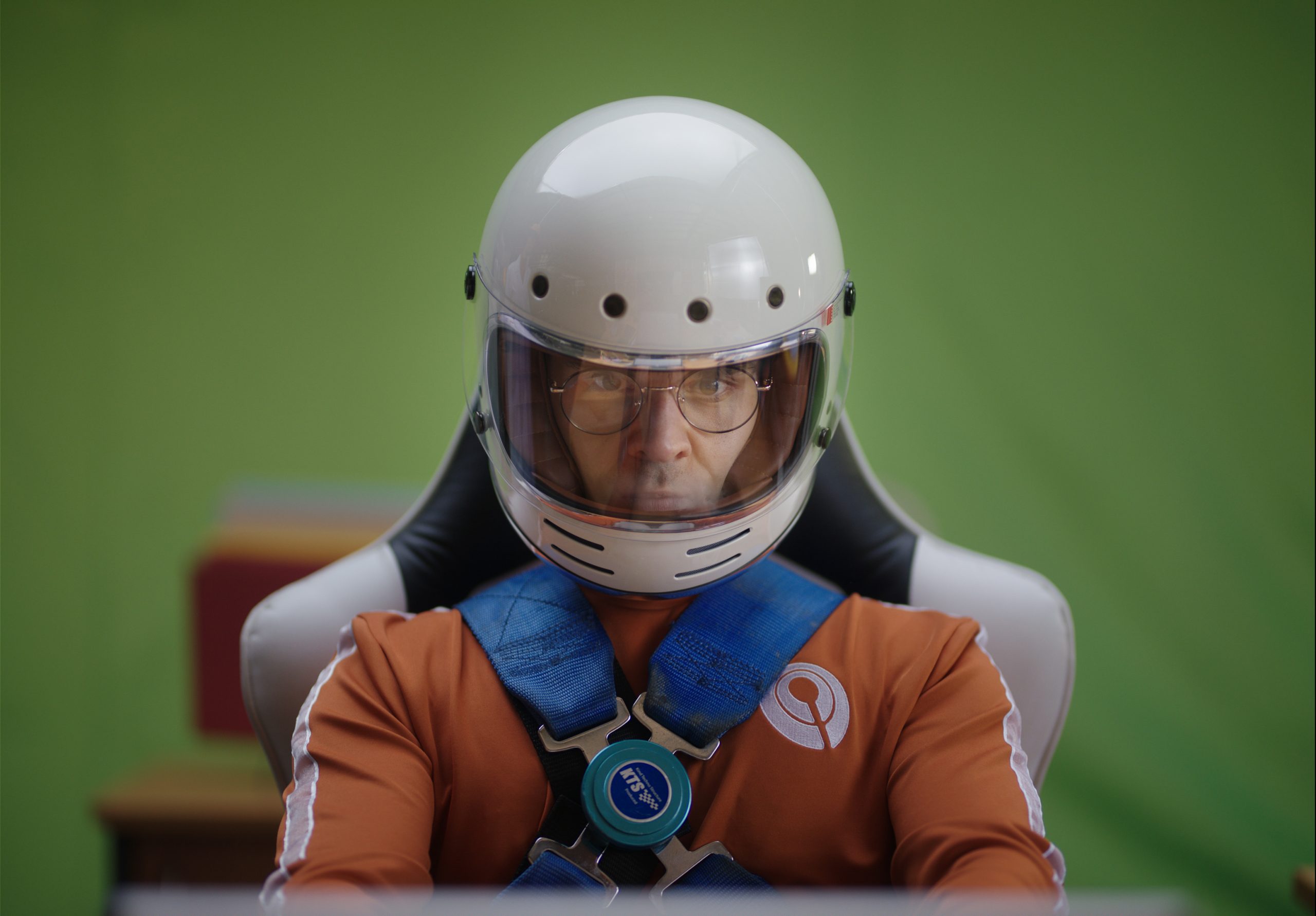 Shooting reflective helmets (or any object) is always fun.

Look in the helmet.

The same rig as before but we were able to soften much closer to the talent so we could tsharpen up the contrast a little.  We added some neg frame left and a 4x4 frame right. 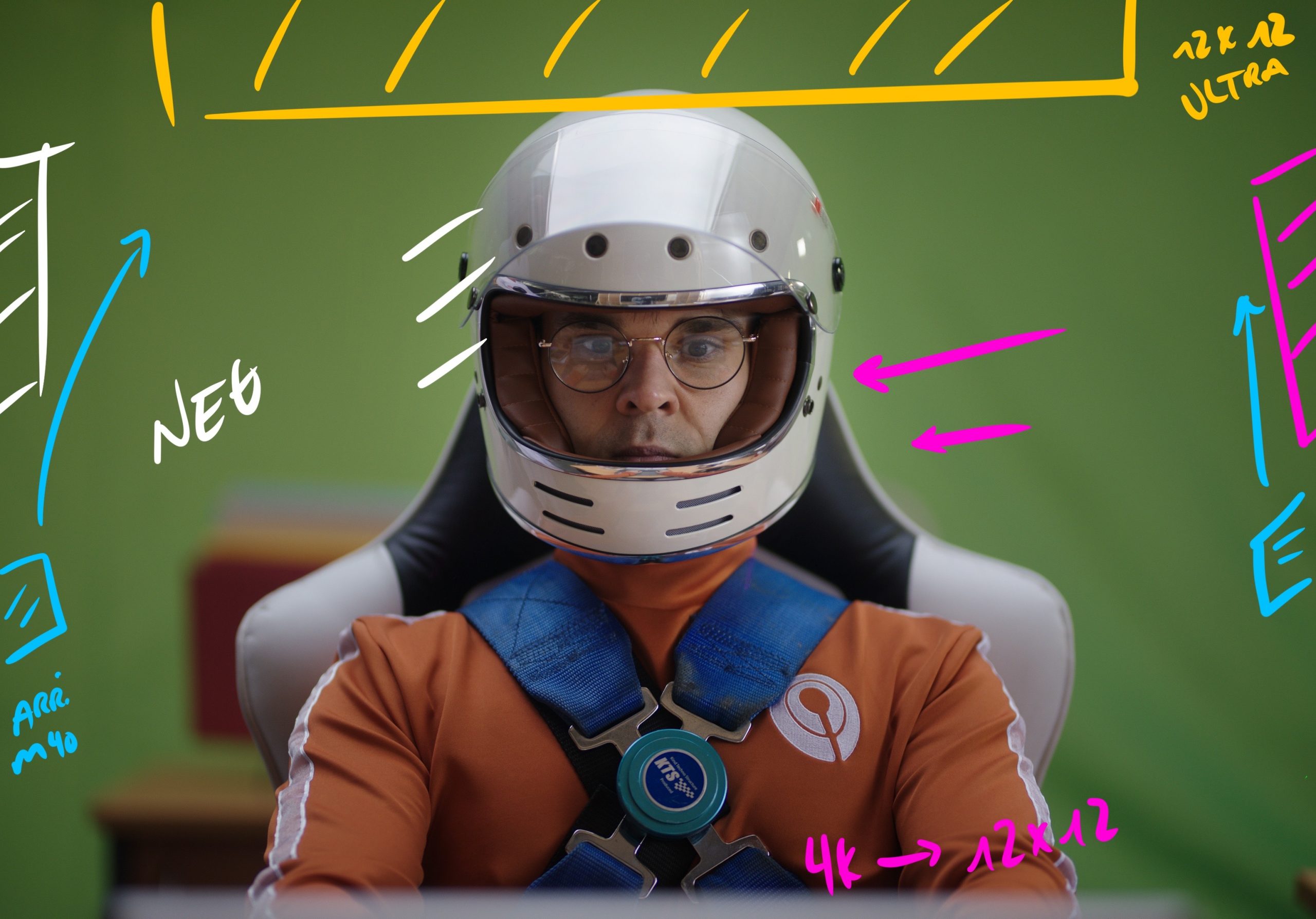 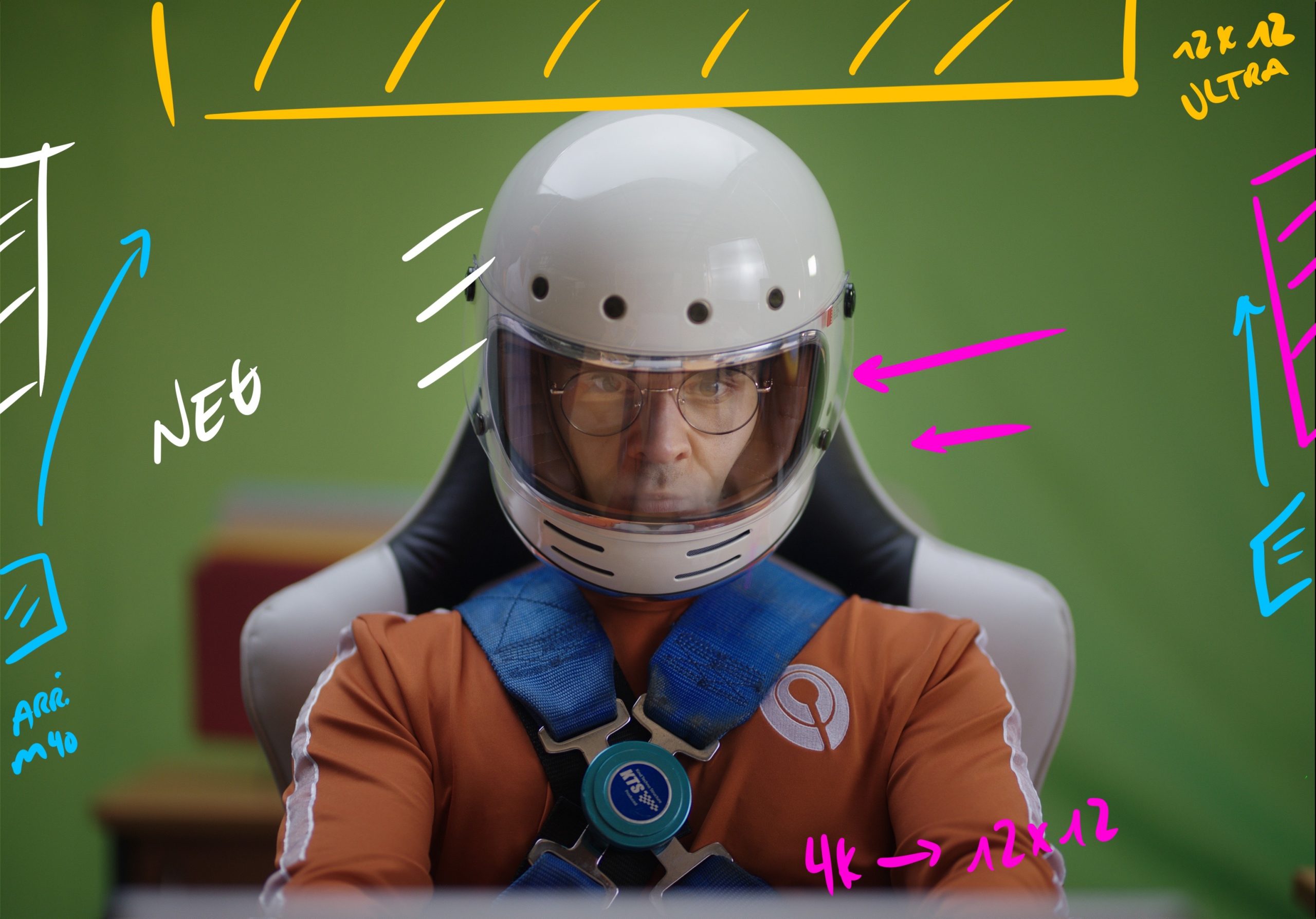 Set Up #3 -The Chalkboard 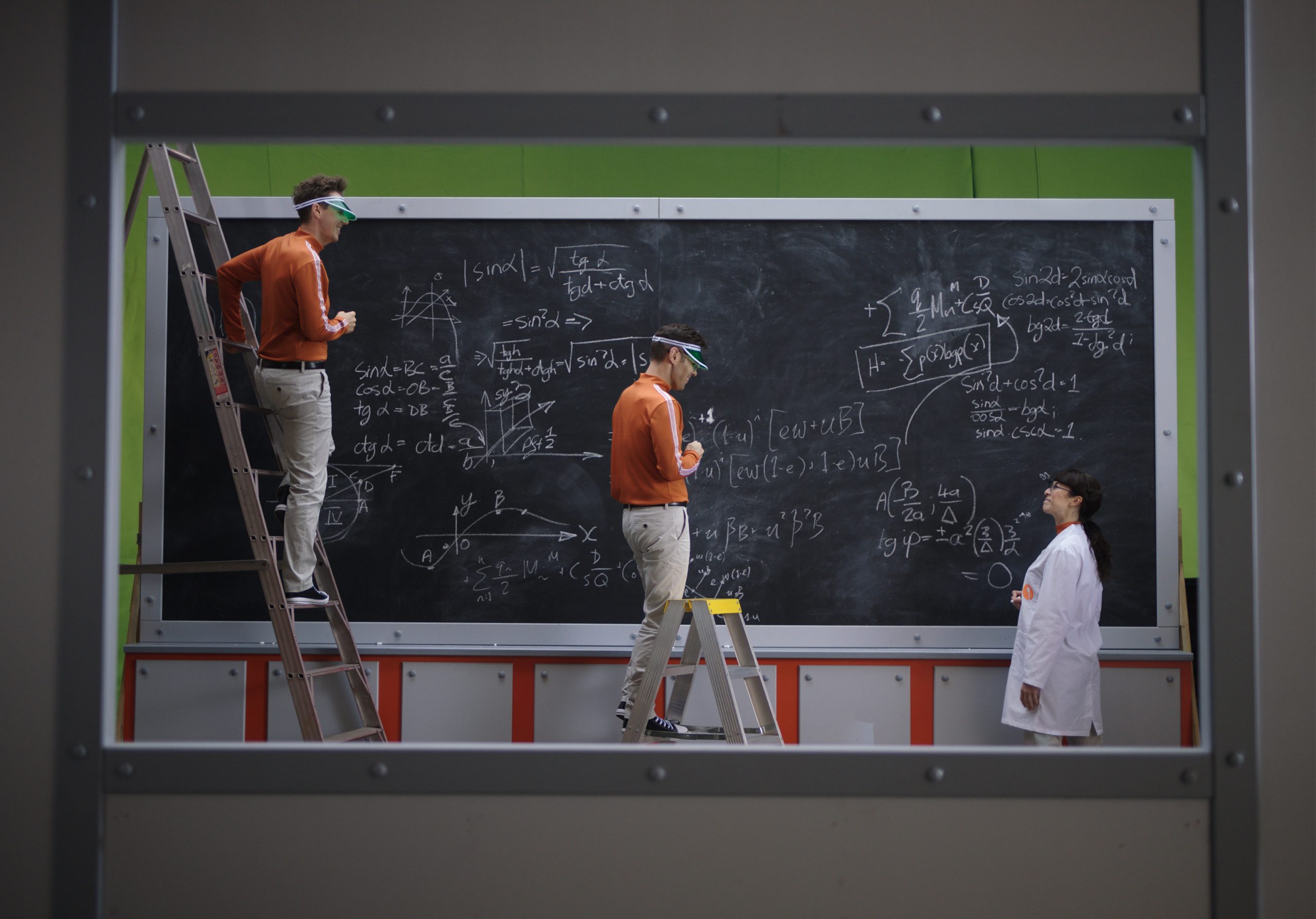 This was almost identical to Shot #1 but now the talent was significantly closer to the background which meant we had to adjust the lighting ever so slightly. 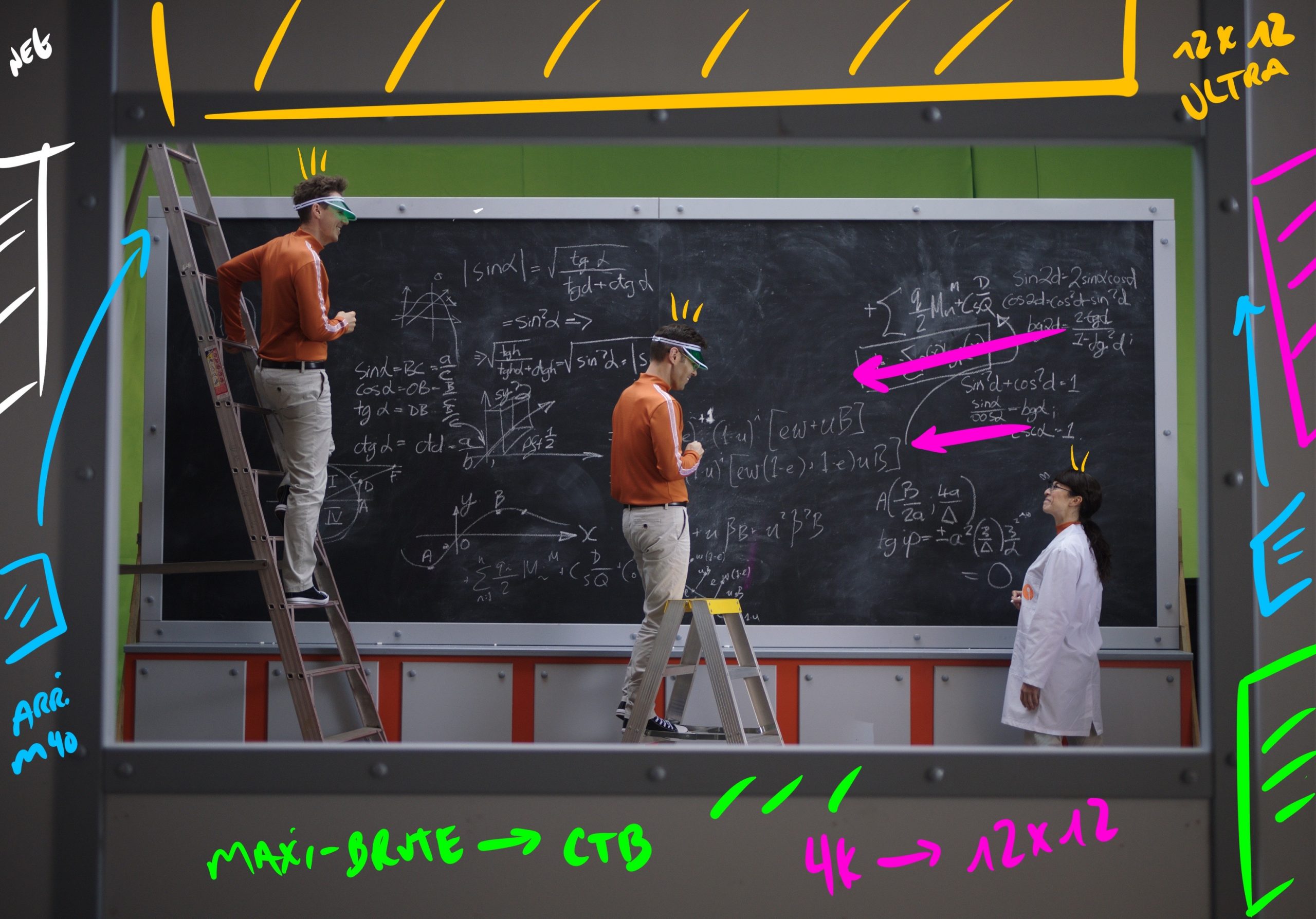 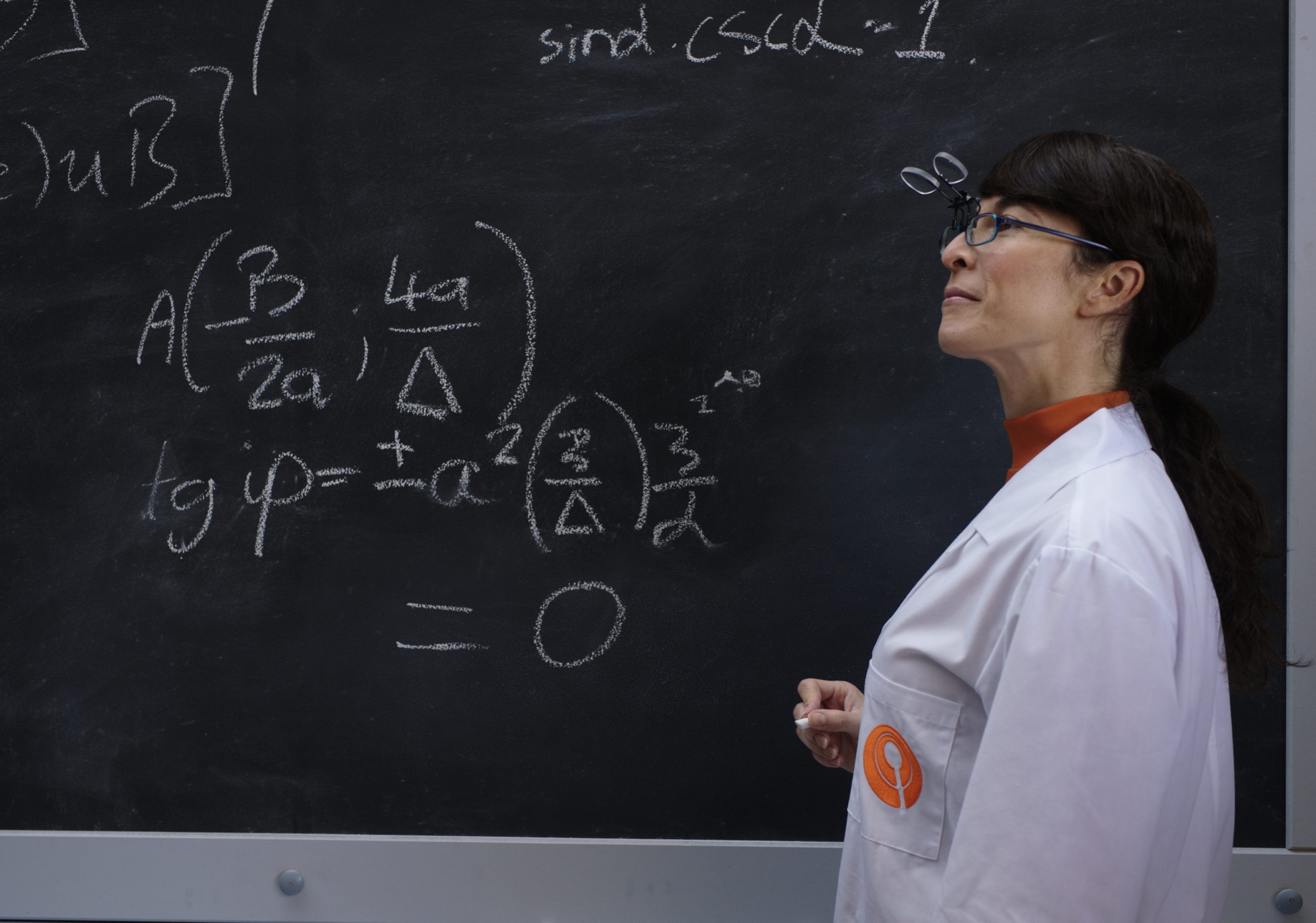 A medium shot of the hero talent solving the equation.

Same as above but darkened the image down frame right so we could squeeze the maximum contrast we could out of the image. 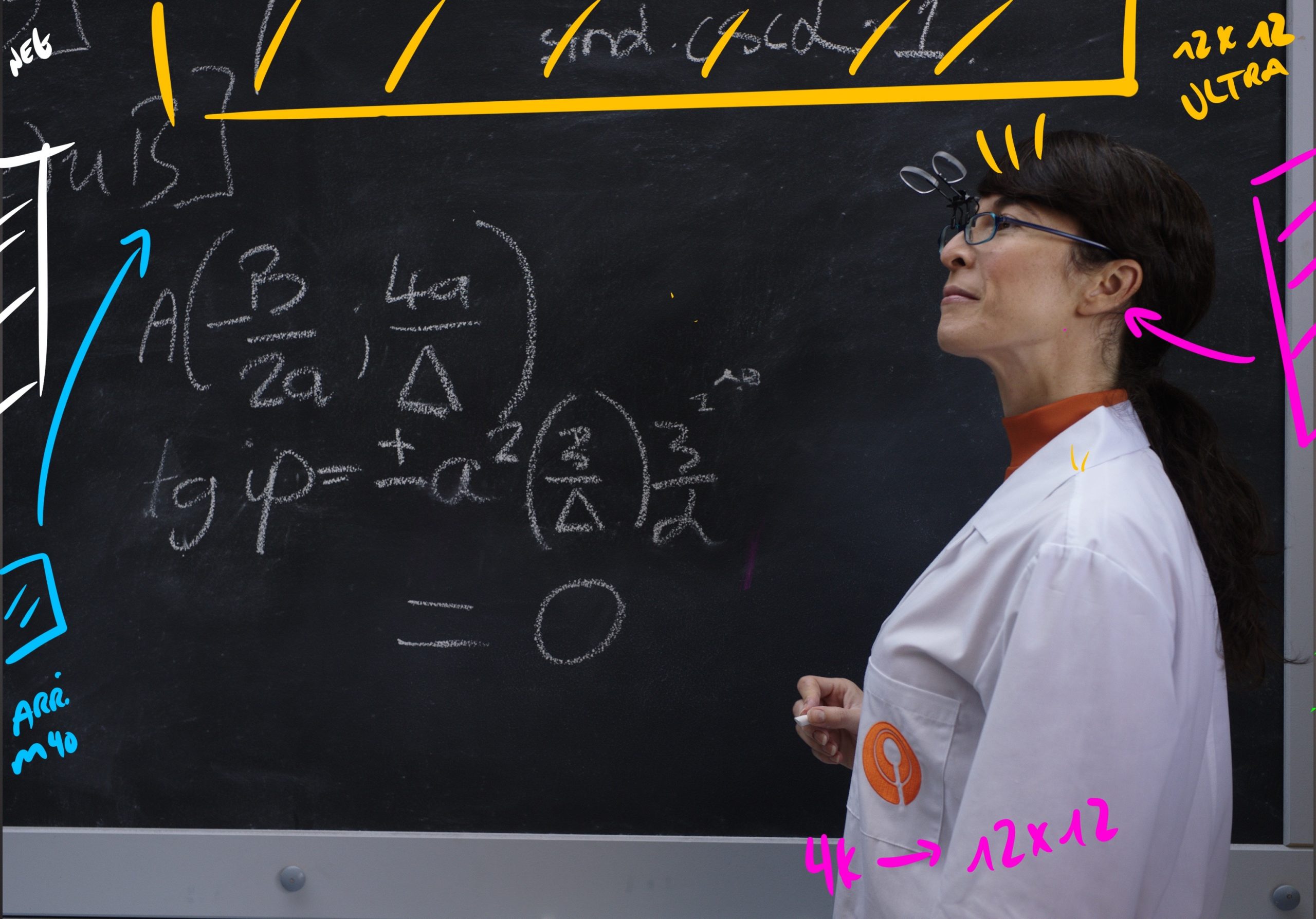 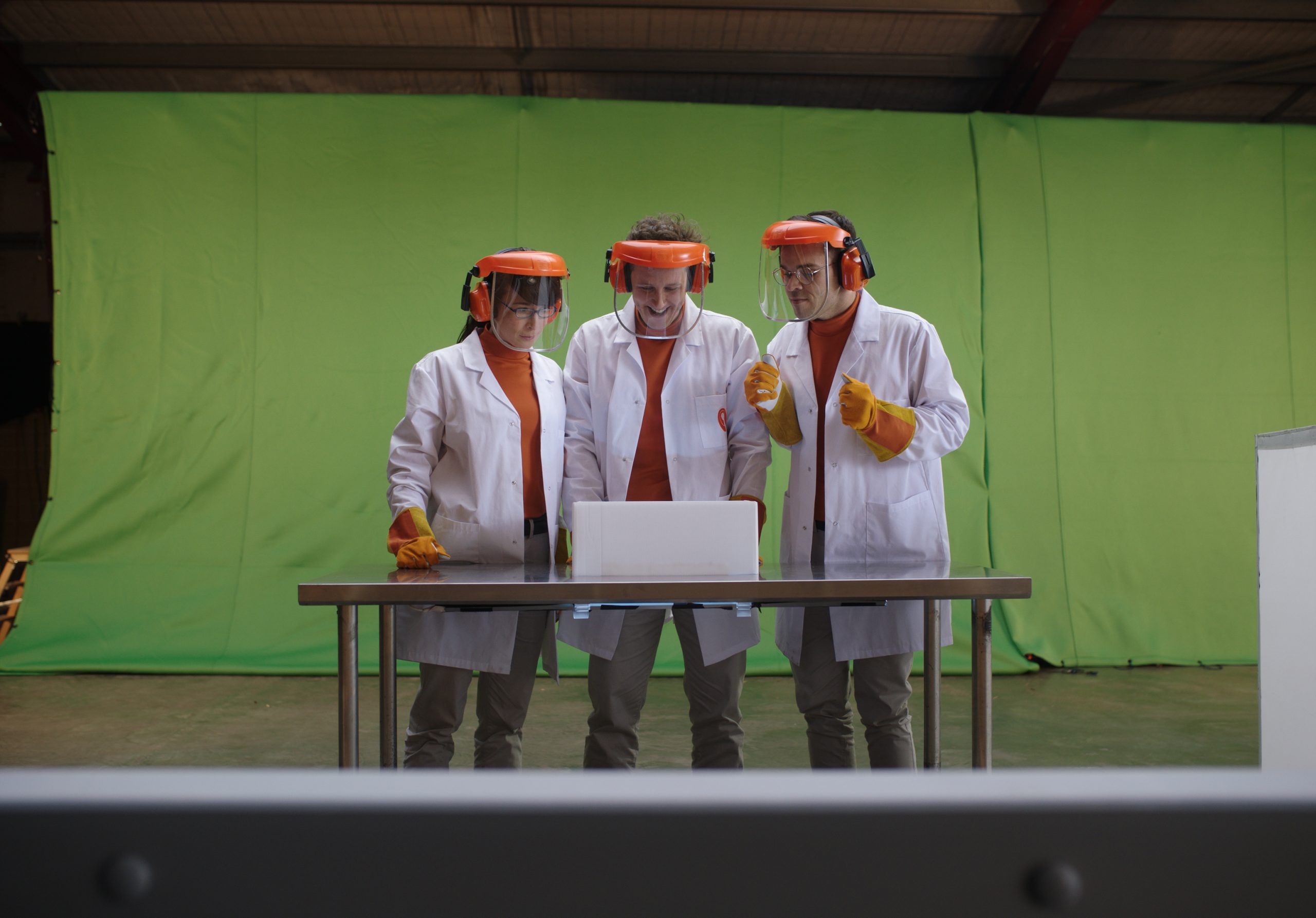 The geek squad throws things in the box and they disappear.  Magic. 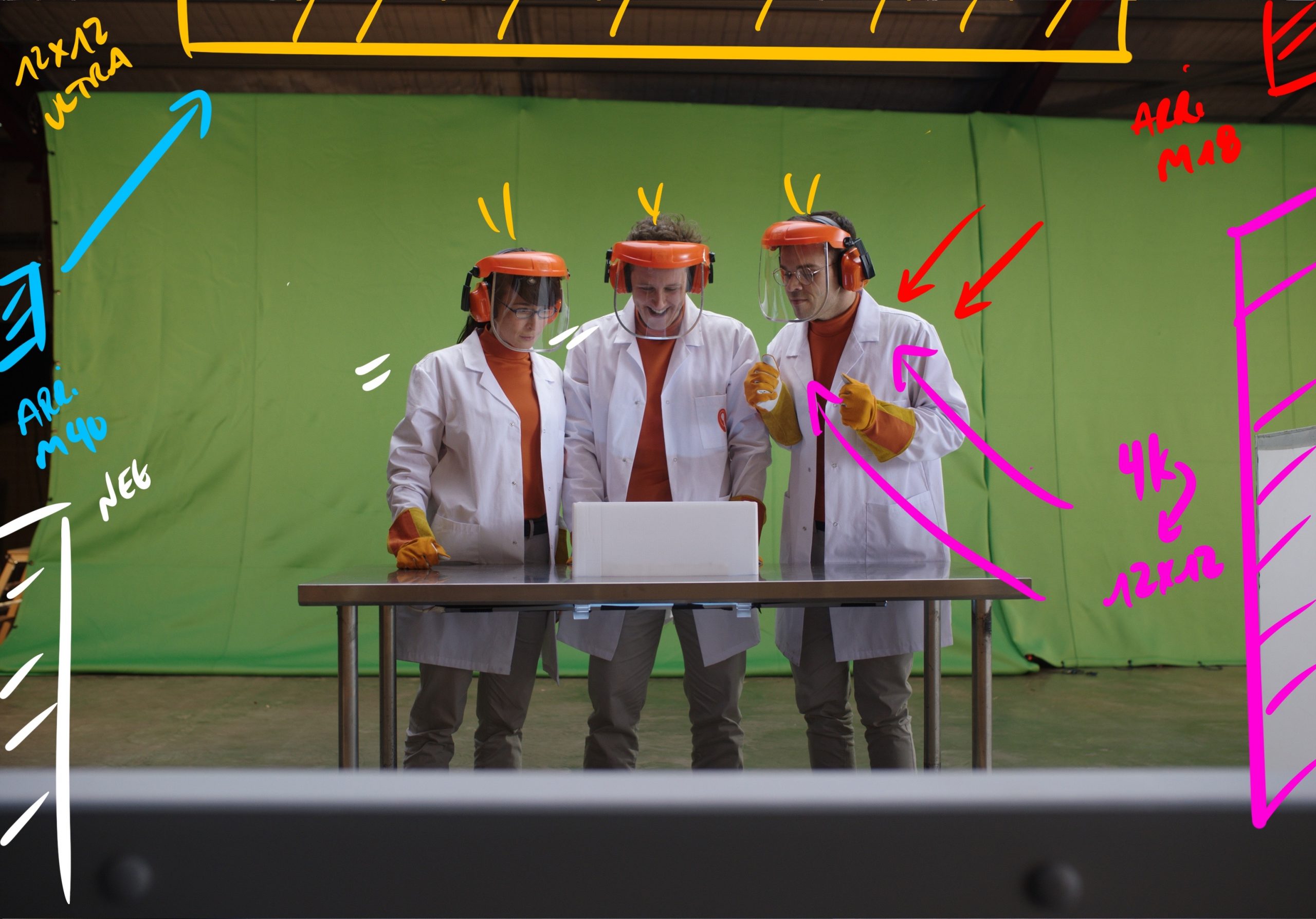 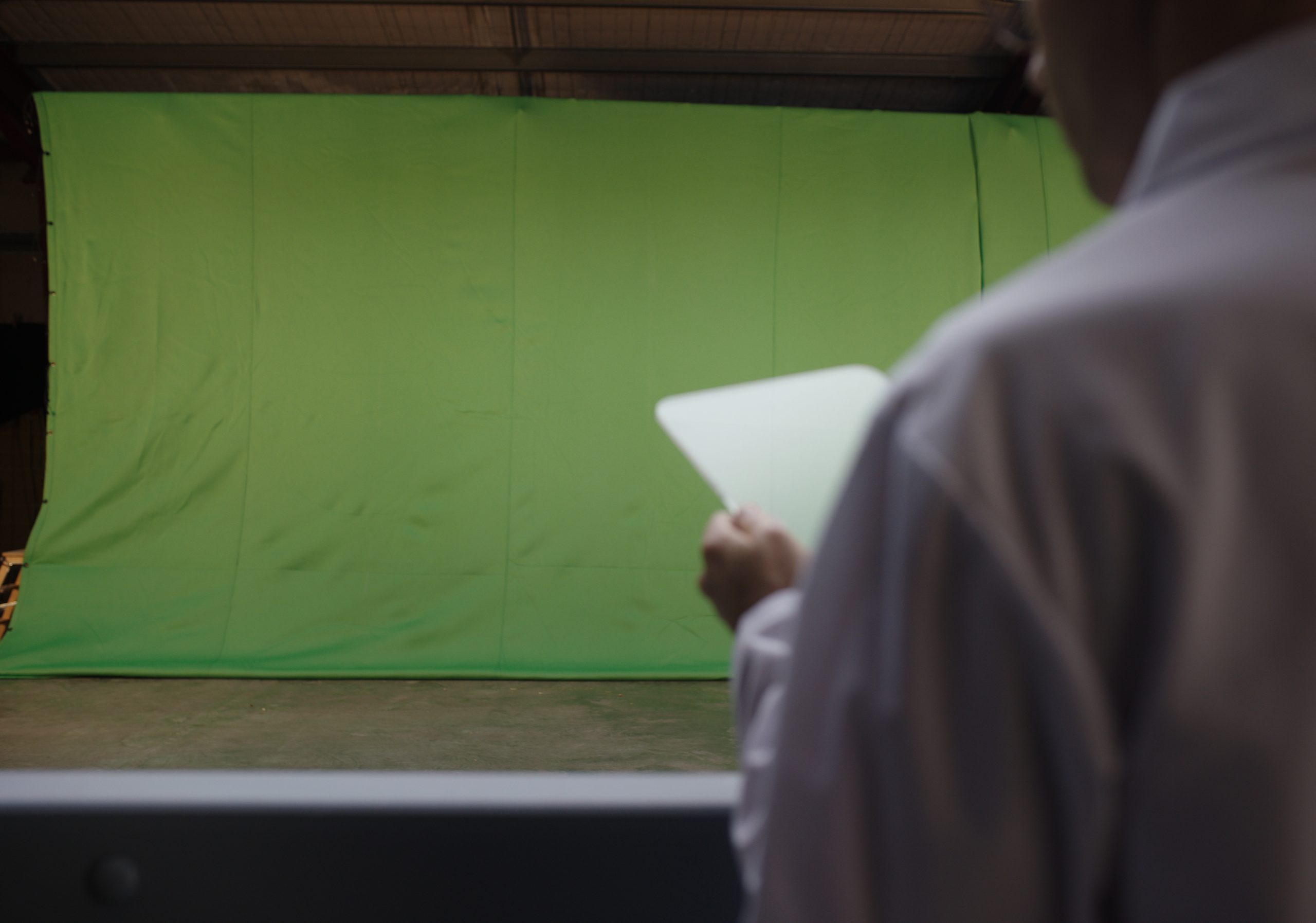 We only had 3 talent with no extras so to layer up the previous shot we used the shoulder of one of the talent so we got an extra for free. 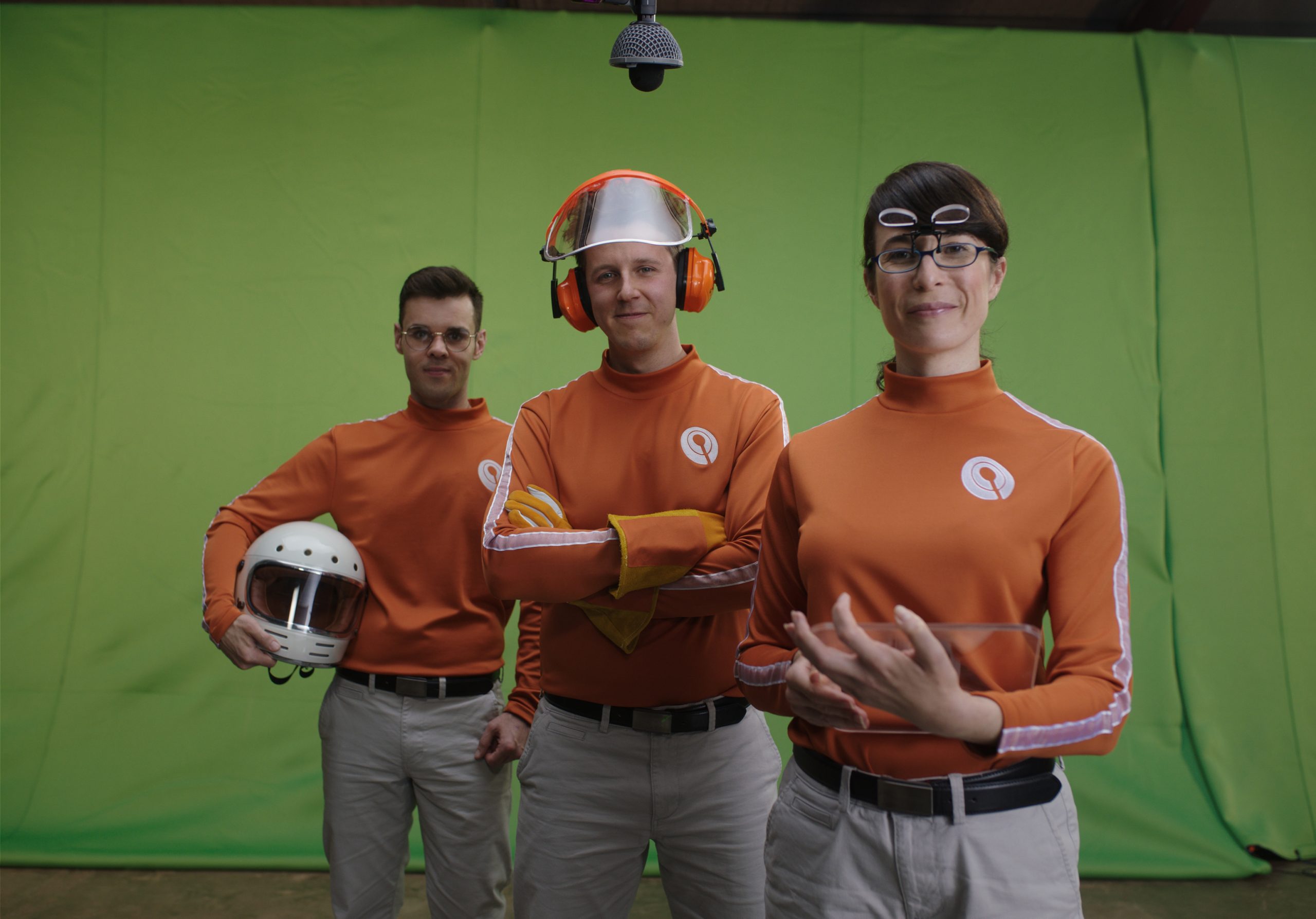 3 shot of the group as the logo plays. 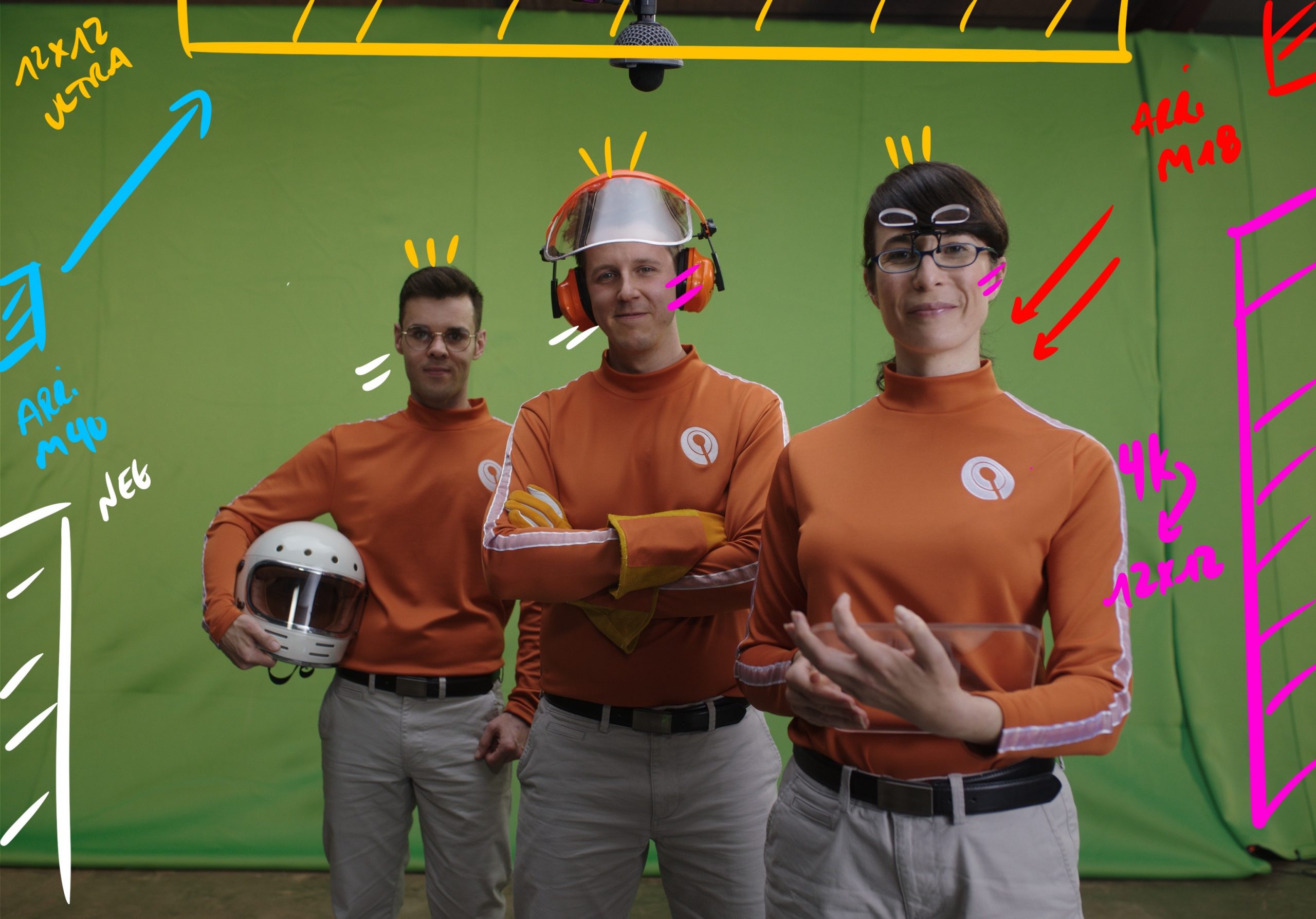 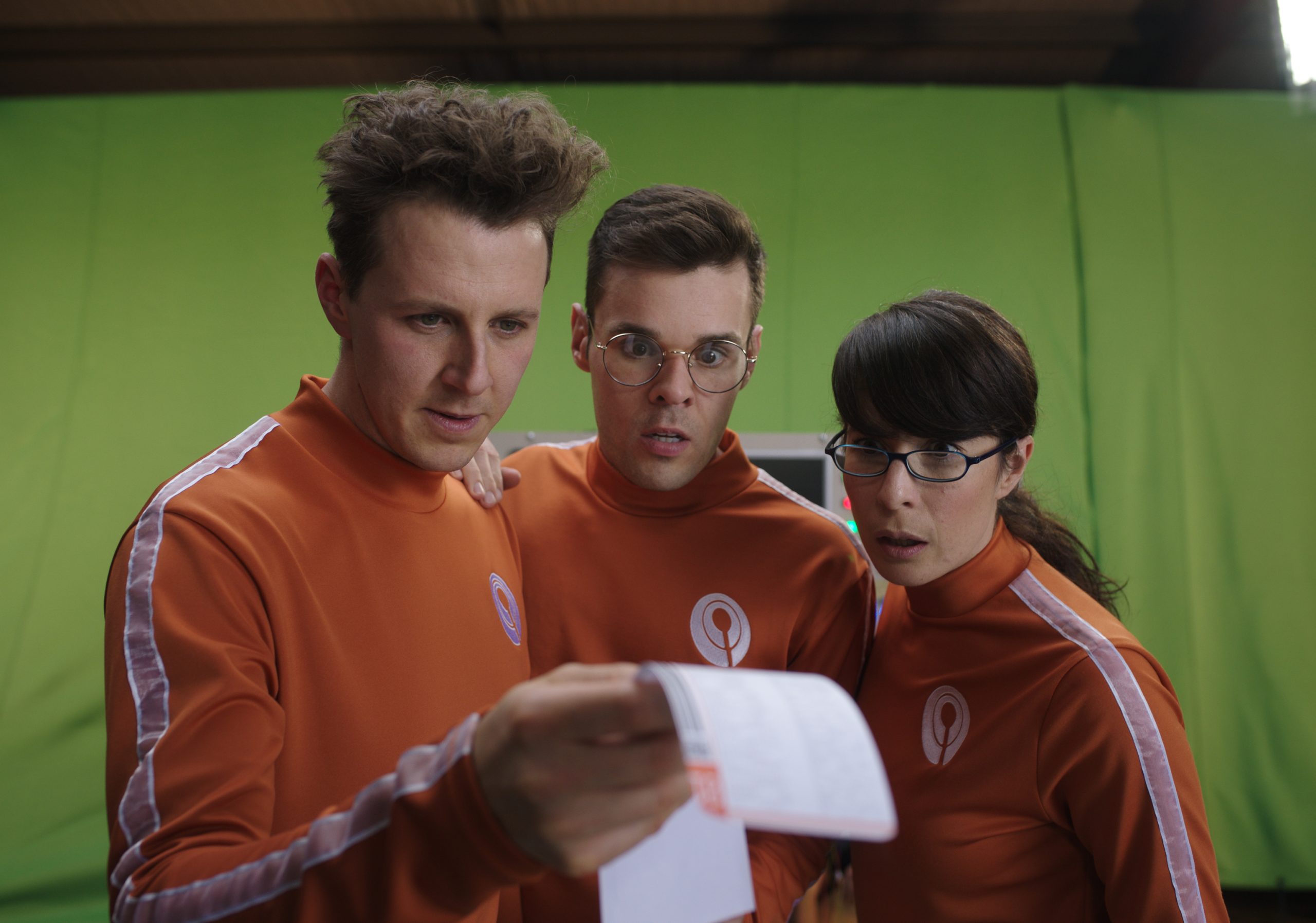 The geeks grab a ticket from a ticket machine. 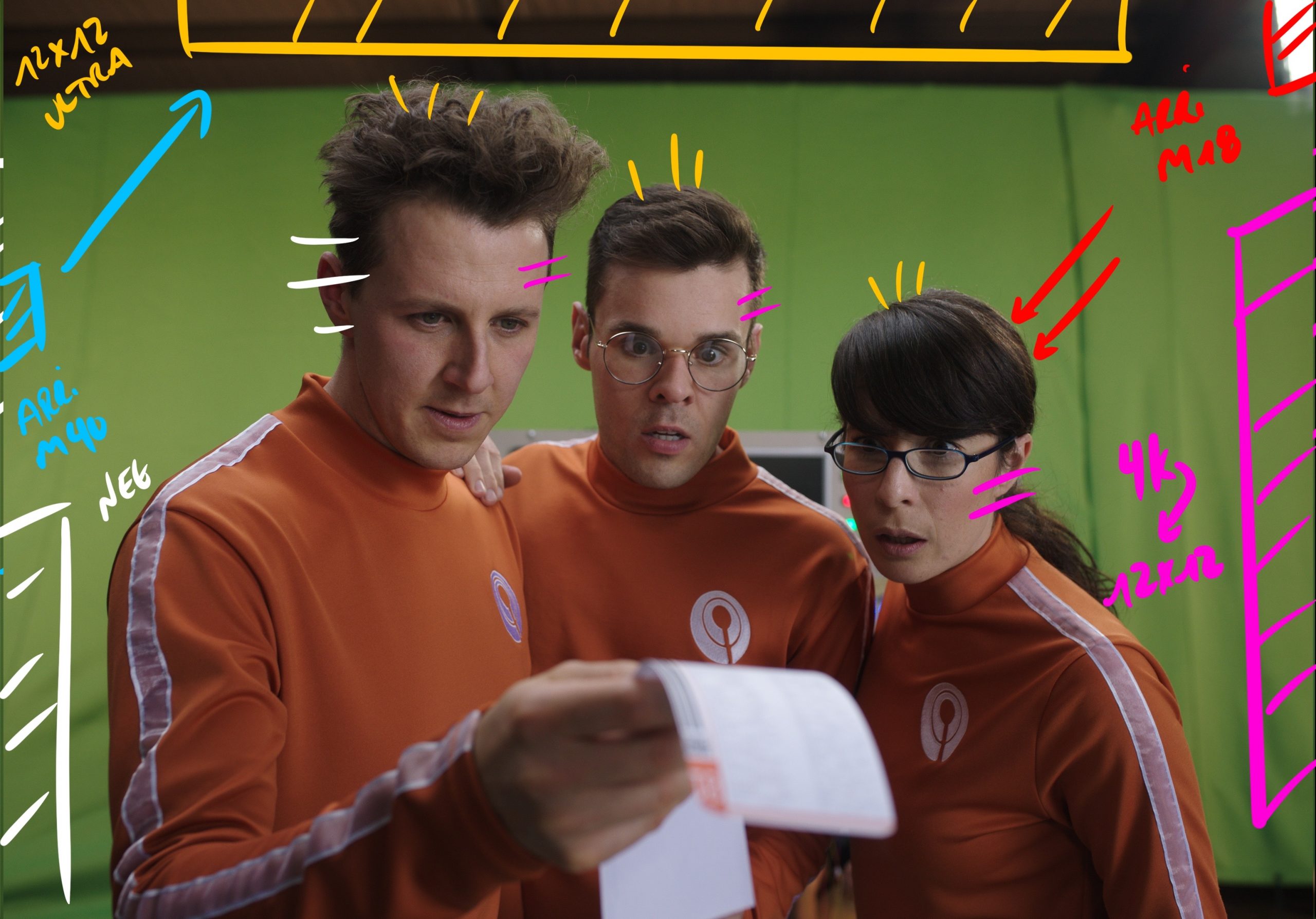 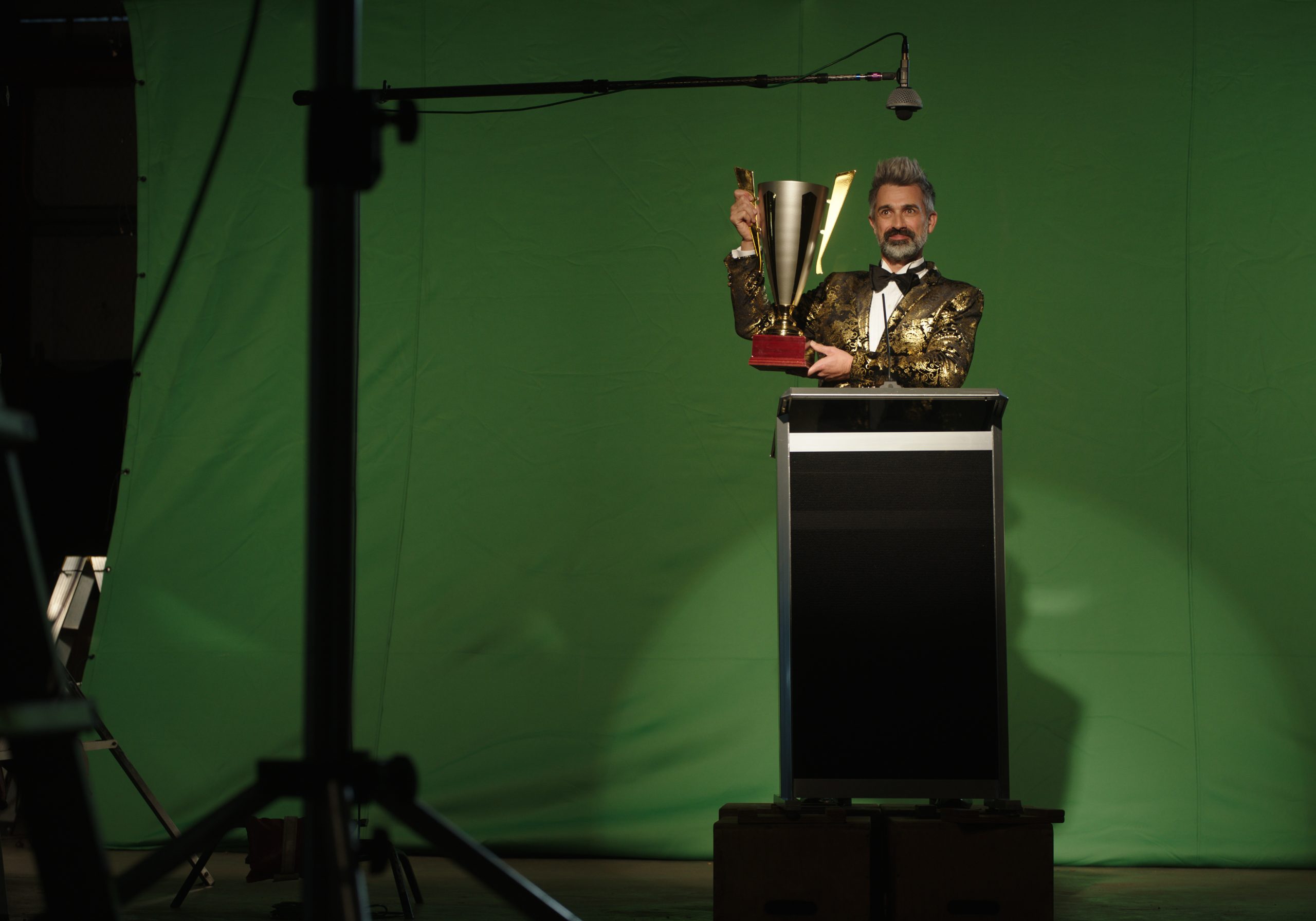 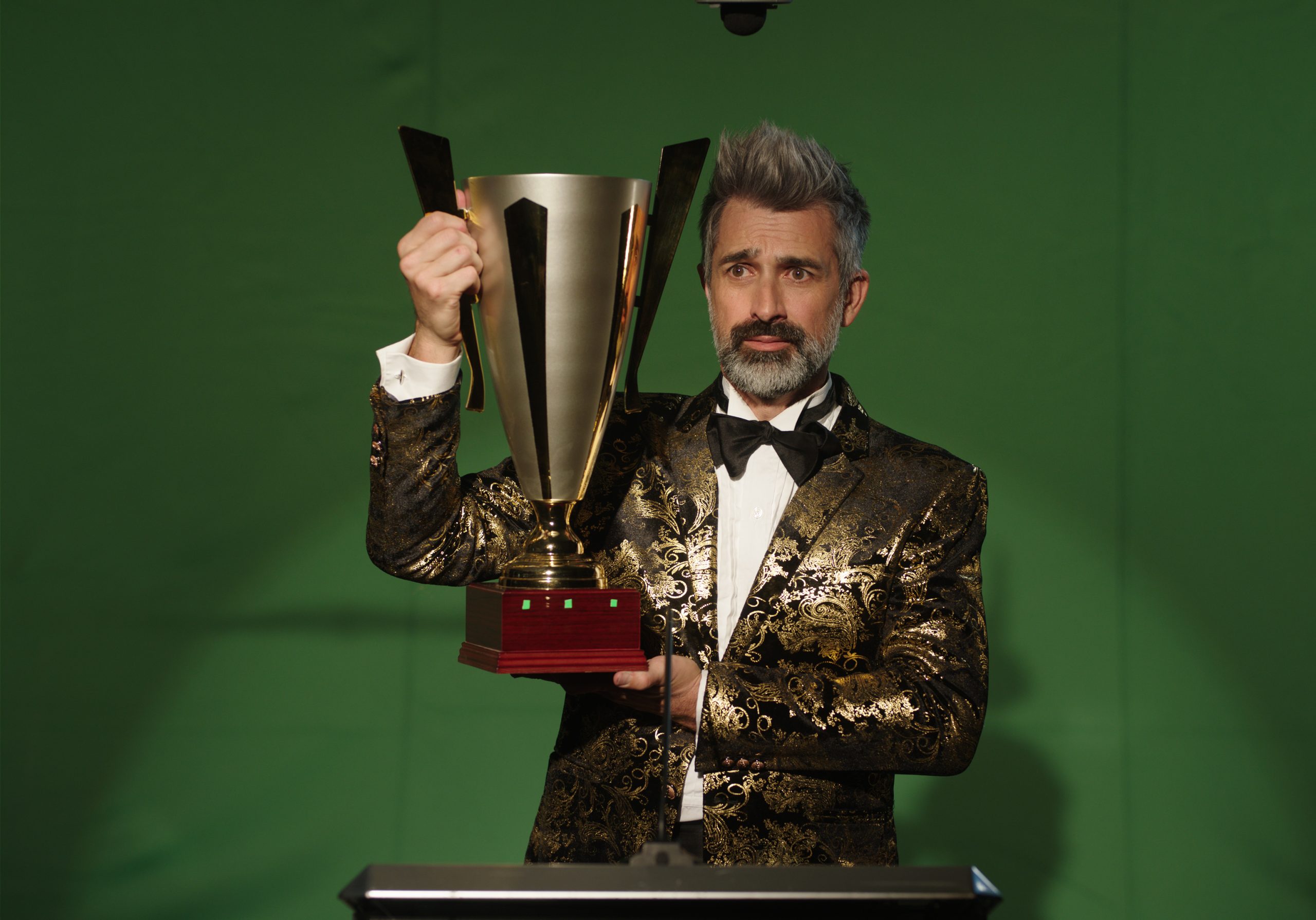 An awards show host standing on stage at a podium.

We killed all the lights, added a Source 4 for the spot light then lit the green screen to get just enough level to key from.

We added a backlight to help create some separation and that is it.

The final composite was a big giant wide shot a stage so it was more about matching the mood of the VFX rather than the other way around. 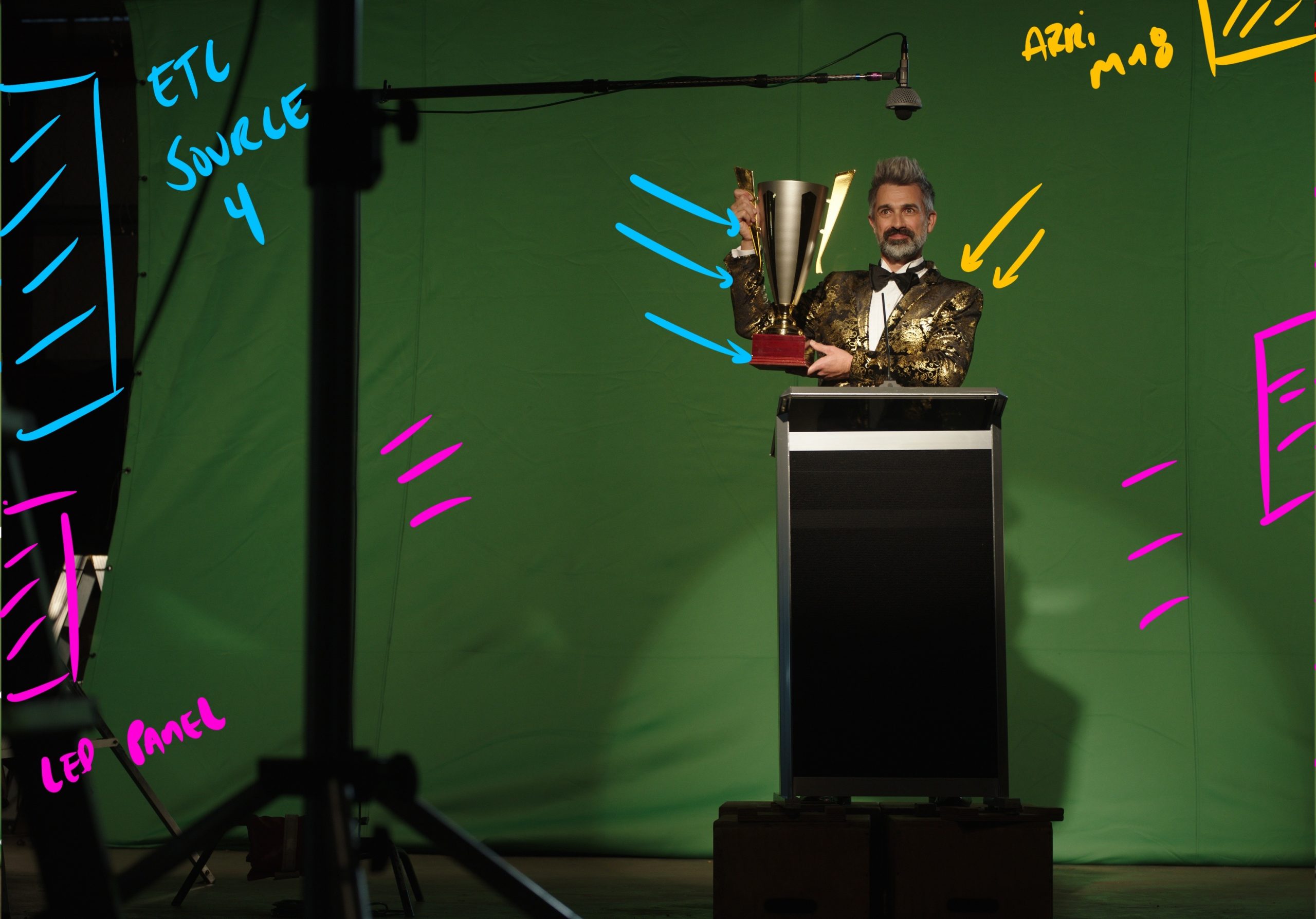 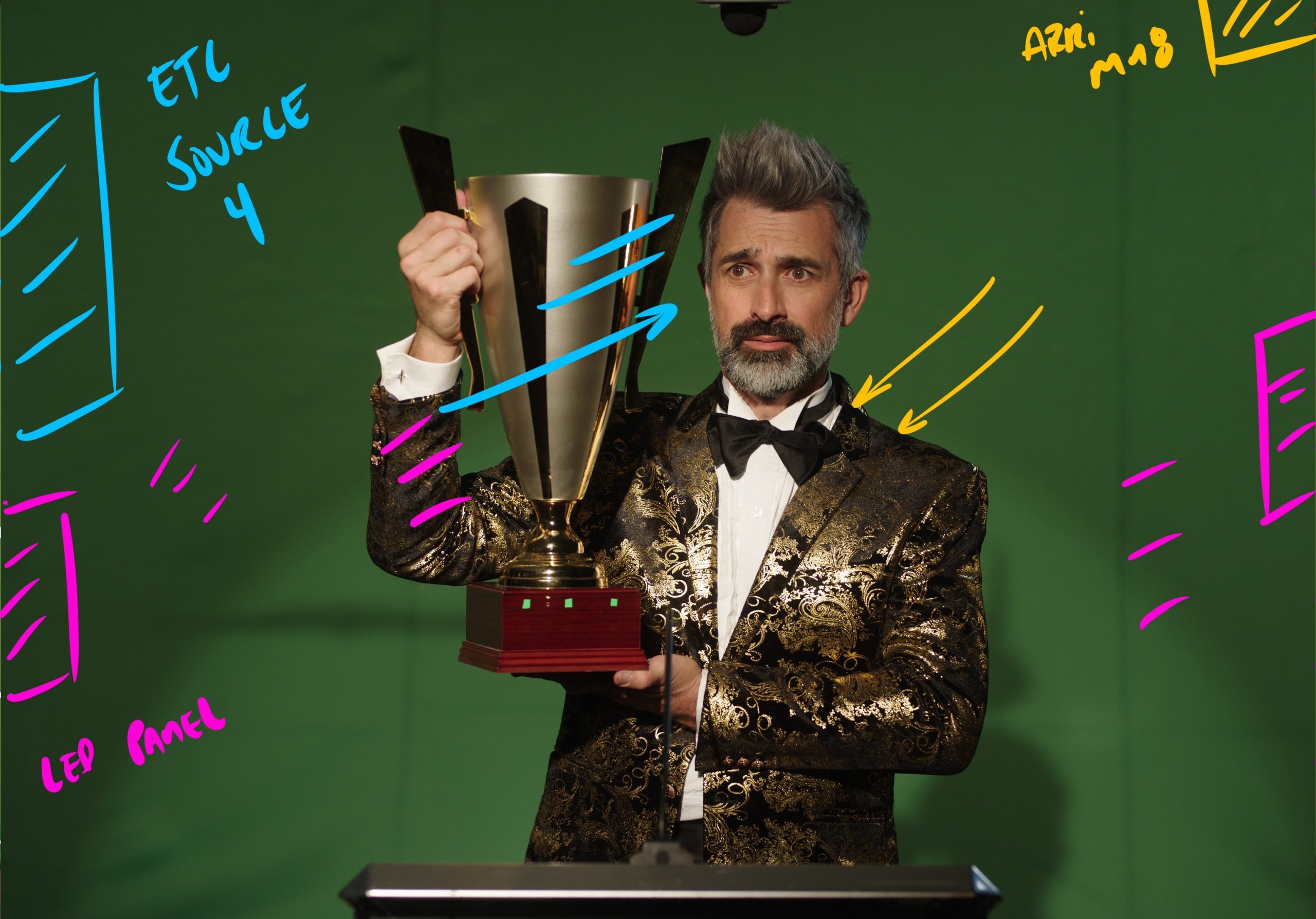