We are starting out 2023 with a bang taking a look behind the scenes of this commercial I shot.  We leave no stone unturned in this episode and while it may look basic I can assure you now that it is.

Nothing fancy just a couple of key decisions and the rest is pretty straight forward if you know what to look for.

I wanted to highlight a situation that came up over the break with a very talented cinematographer and friend of the show Tim Thompson.

Unfortunately Tim had an accident recently that has turned his world upside down and a Go Fund Me campaign has been put together to try and help bridge the gap while he recovers.

Tim has been a past guest on the show and is very active in the Patreon group and I hope you check out the page and support if you are in a position to do so.  Life doesn't always goes as planned and in a profession like ours it's times like these where the community can come together to make a difference.

We are pausing from our breakdown series for a podcast on feeling lit.

No not that kind of lit.  In this week's Patreon episode I am going to share what I think makes things feel lit which is simply shorthand for not feeling right.  Whatever that right might be if something feels lit it is usually not right.

There is a level of nuance that we haven't yet reached and that is what I am going over in this podcast.  What it is and how I try and fix it when I see it.

On the Road Again- The Spot

We shot this ad on the Alexa Mini LF paired with a set of Cooke Speed Panchros.

Most of the lenses don't cover the sensor so aprat from the opening crane shot everything else is the 50mm or 75mm.

There were no fancy lighting tricks or techniques.  The only lamp we used was a 12k HMI built before I was born and some giant solids to dial up the contrast. 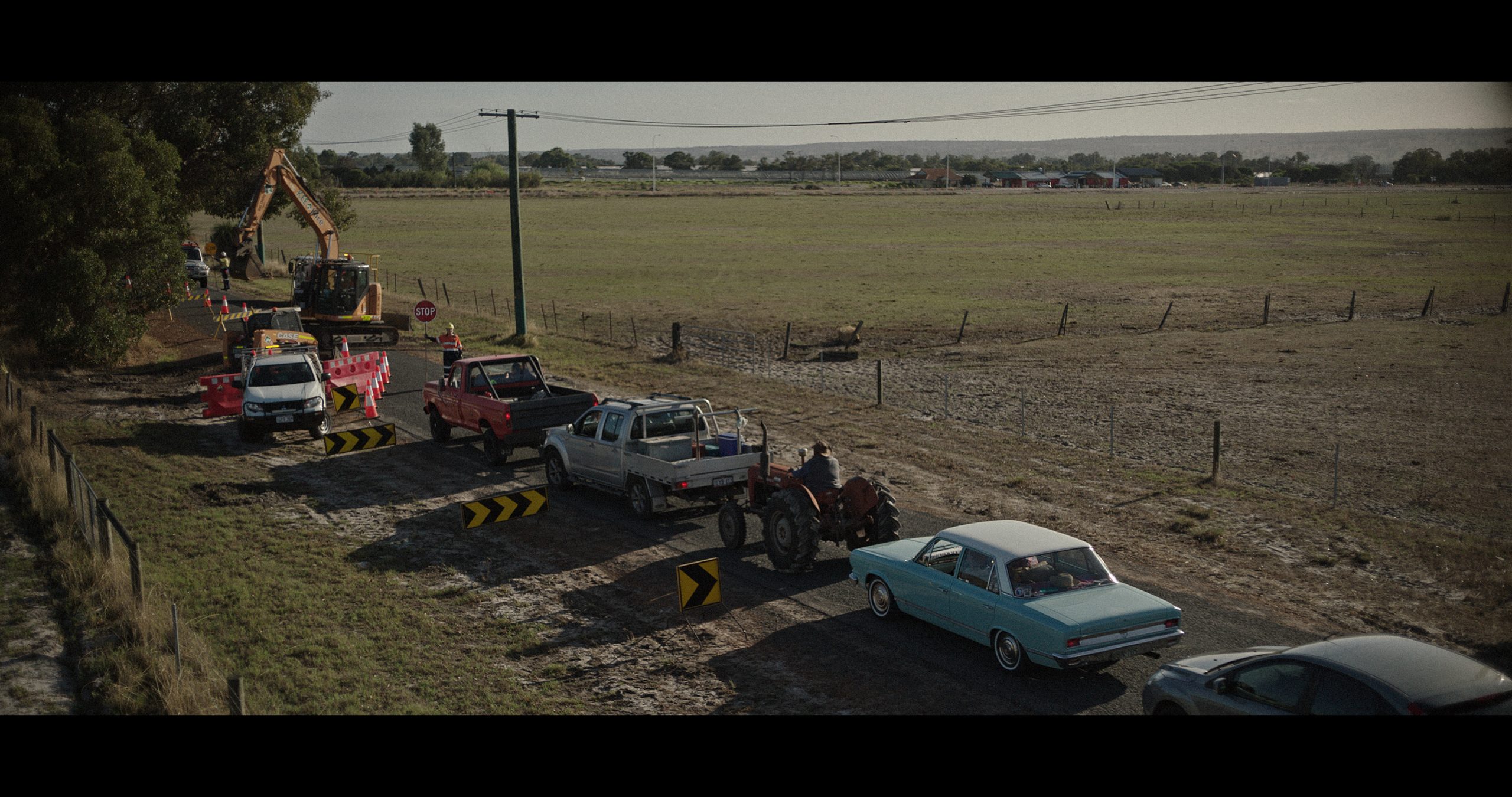 Our hero sits in his silver pick up truck hating his life.  The camera swooshes down towards the lollipop lady.

The location is north facing meaning the sun would at least be somewhat backy most of the morning looking north east.

The real lighting was deciding what the earliest we could shoot this shot would be and still be able to carry over the look for the rest of the day as the sun rapidly gained altitude.

Any lower and the shadows would be too long.  Any higher the shadows start to disappear and it all becomes very flat. 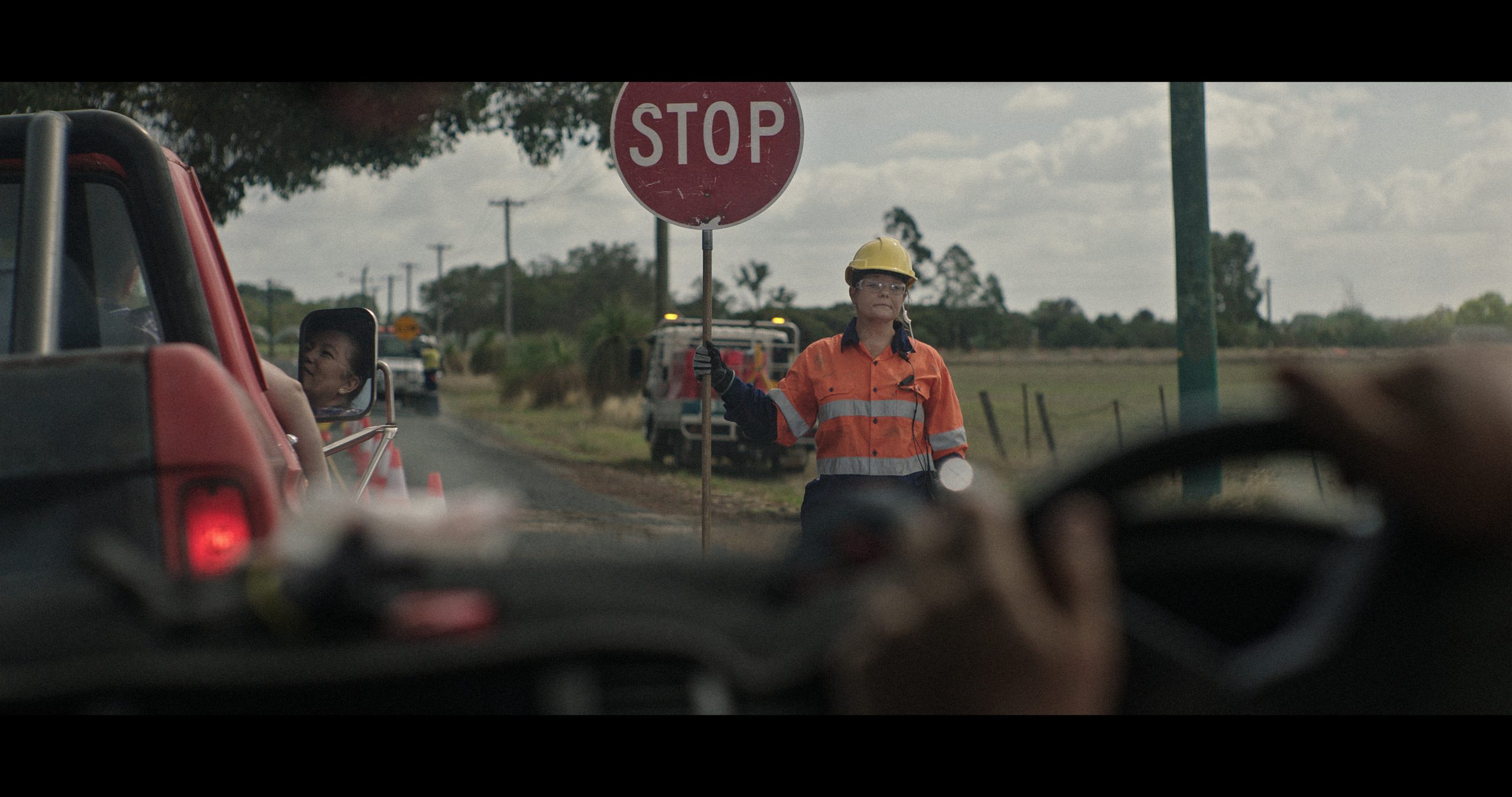 The camera tracks in over our hero's shoulder to reveal his nemesis (the lollipop lady) making eye contact.

The clouds quickly stole all of our contrast from the wide shot so decisions had to be made.  Do we or don't we pull out the 12k.  We went with yes let's do it.

Normally I regret those decisions and this is no exception. 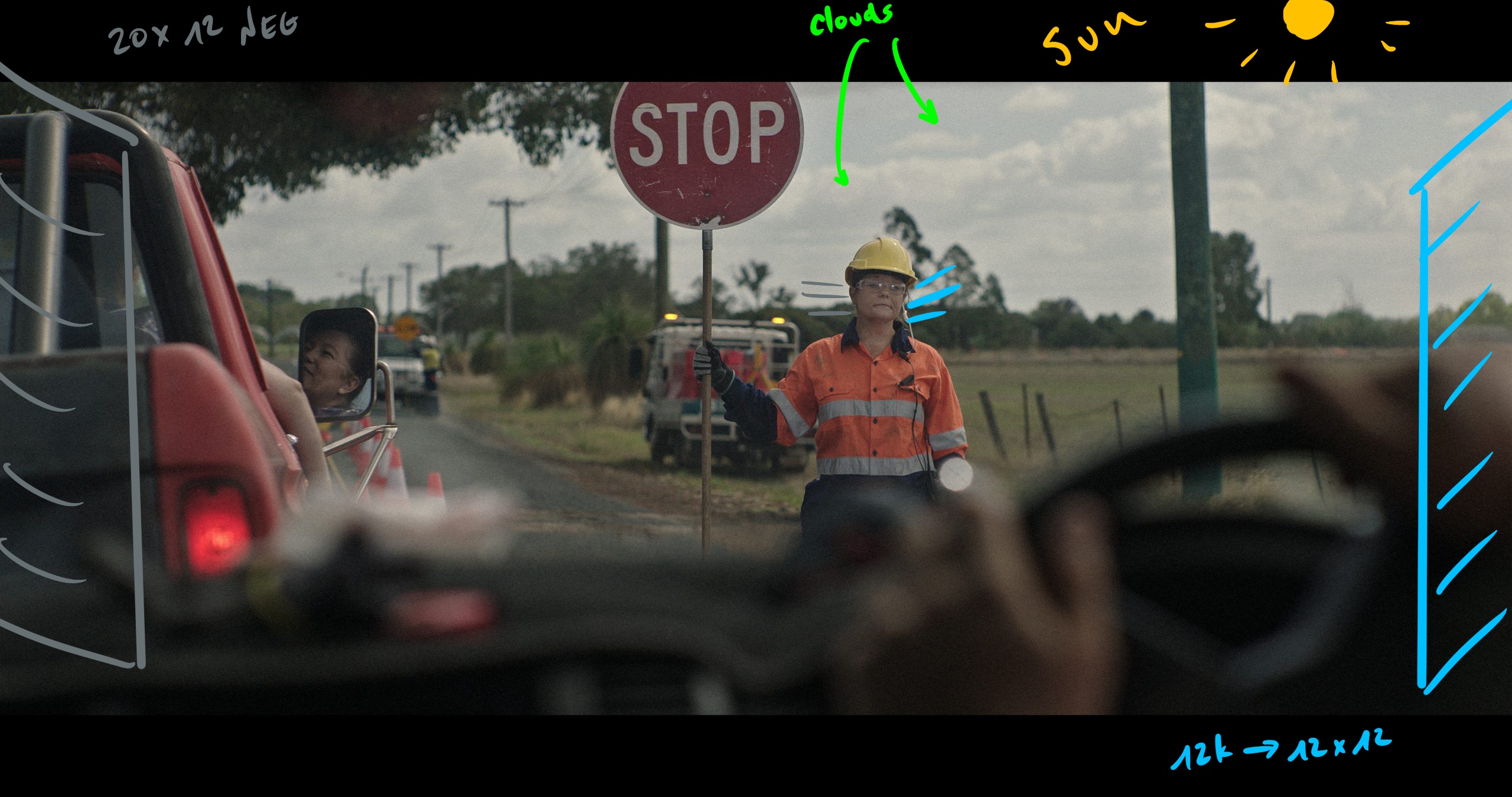 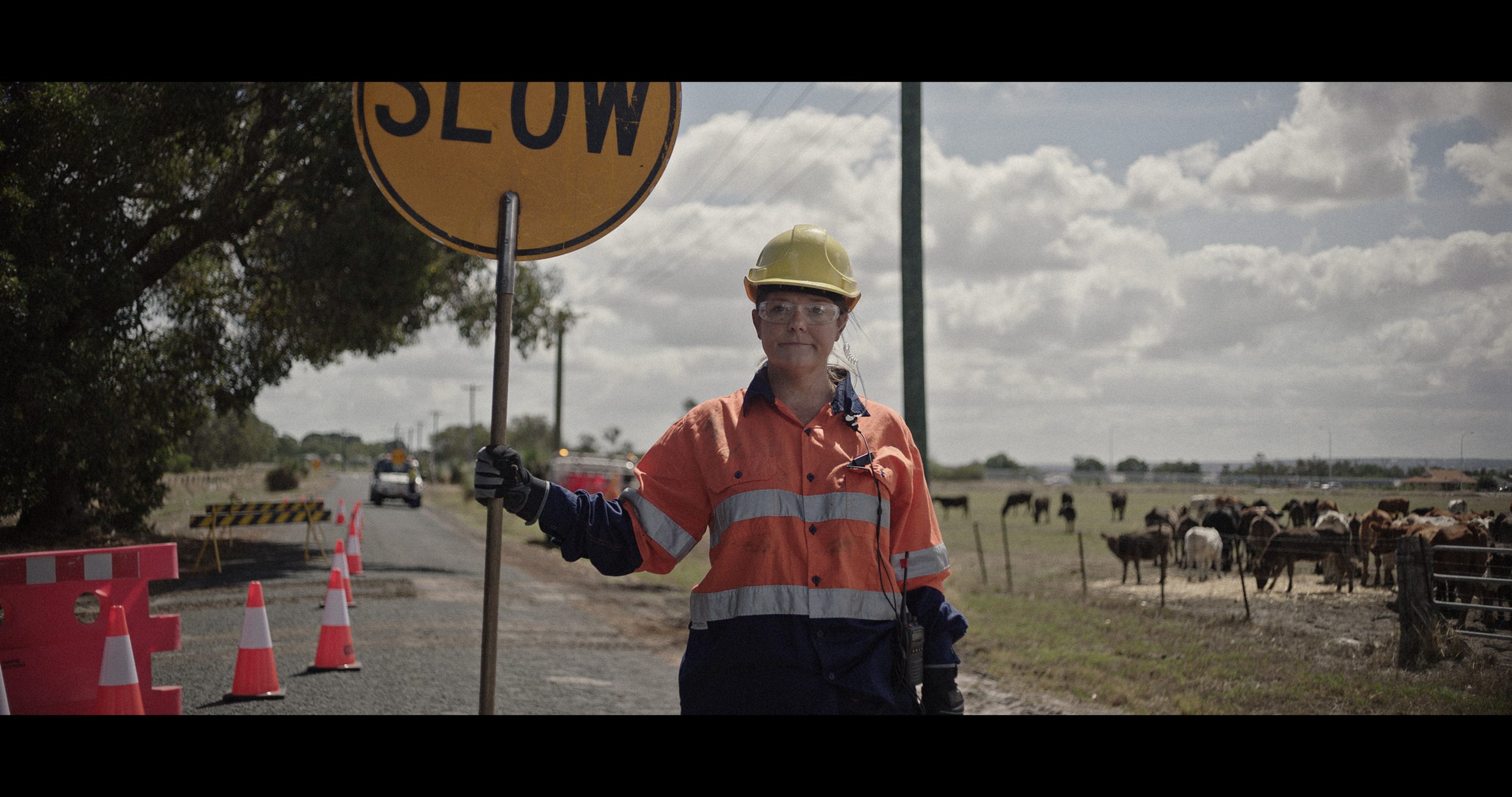 Same as before but now we are closer and wider.

The sun popped in and out for this entire set up so not sure which take they eventually used but when it is in full sun you can see the 12k is not doing much except showing up in her glasses reflection.

It is the same set up as before but everything came that much closer as we weren't seeing as much of the world. 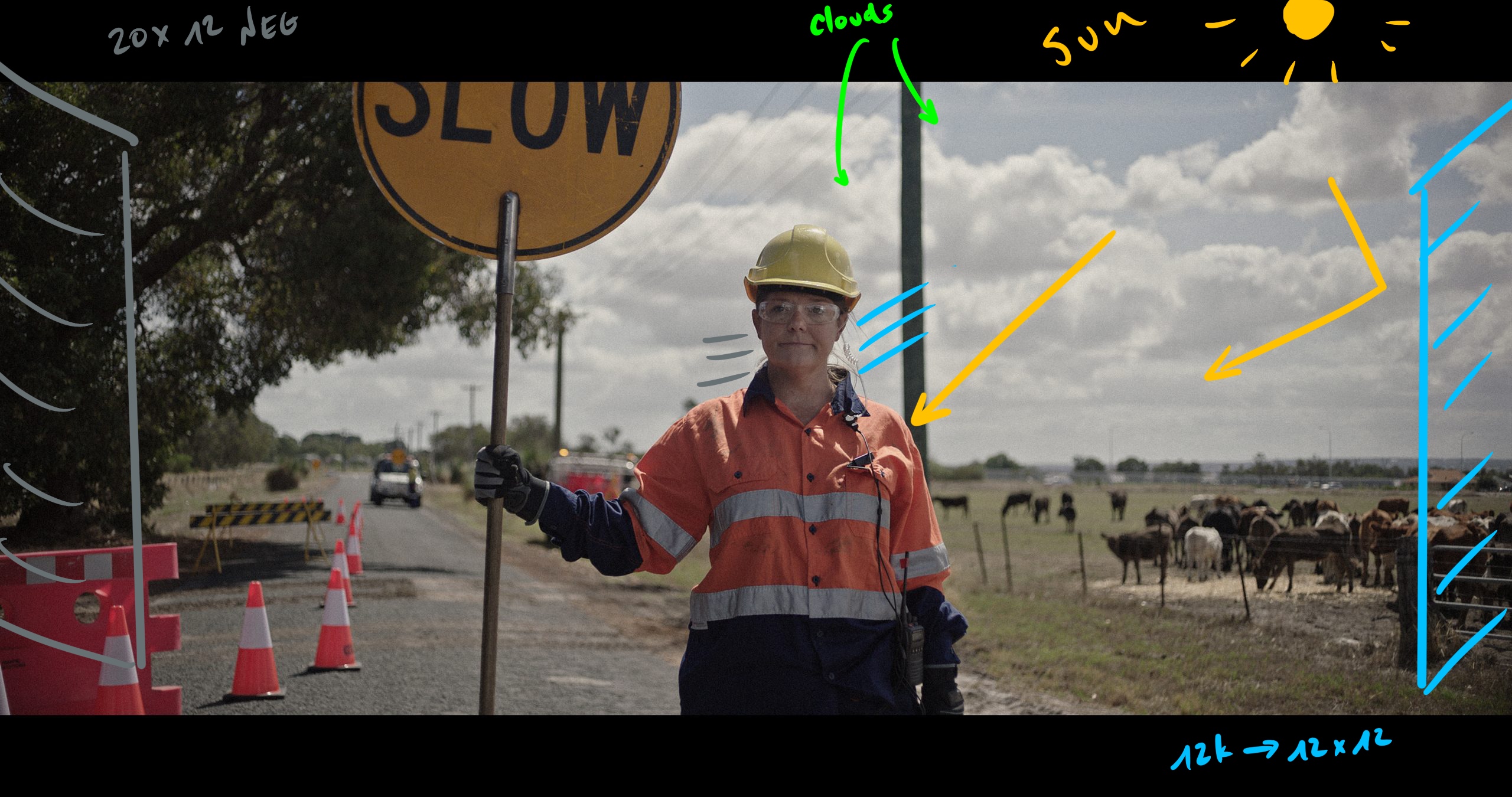 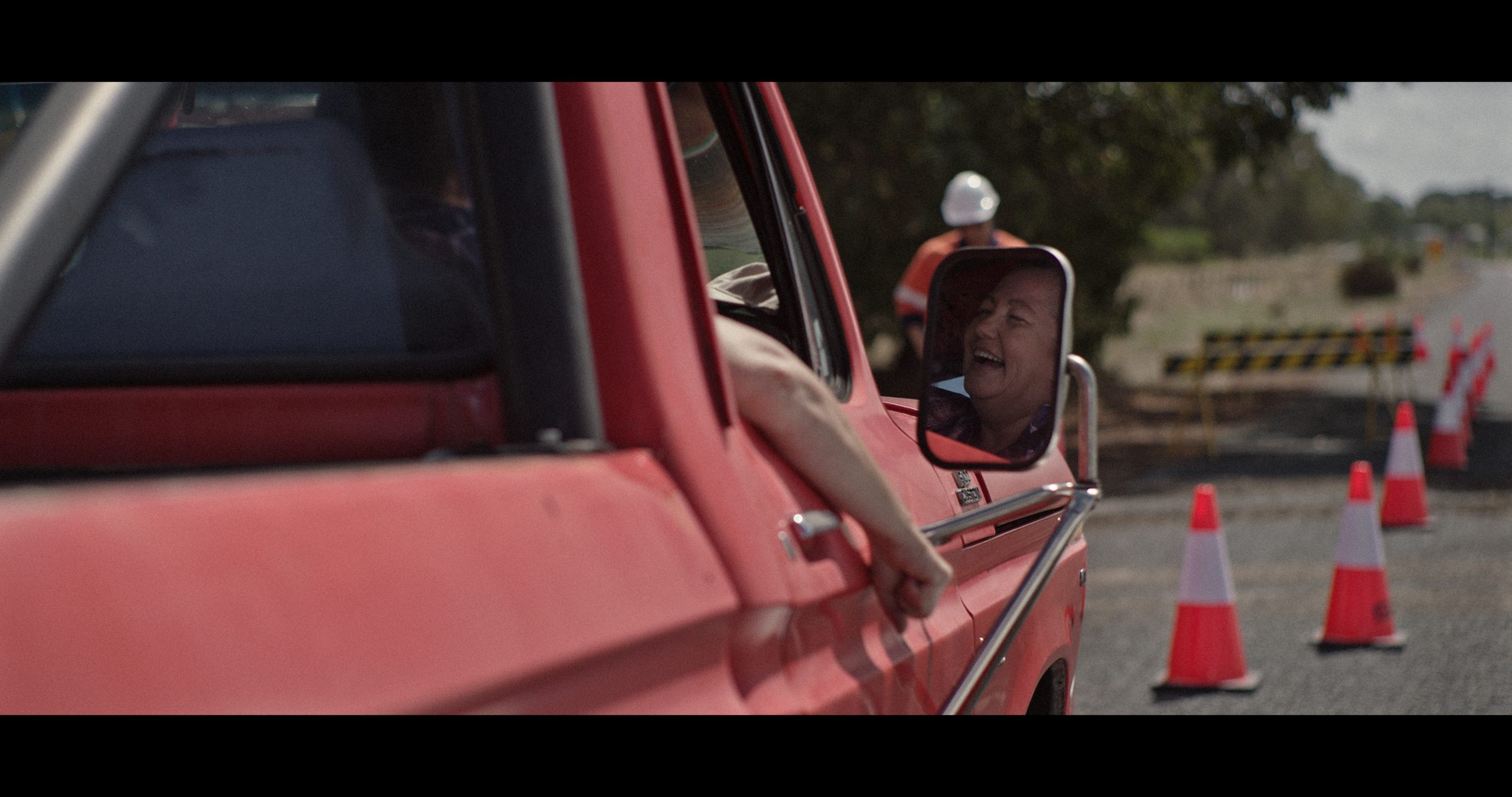 The camera tracks in on the line of the truck as it shakes back and forth as the driver sings.

This was the sacrificial shot of the day.  Not the right time of day for this one but there was nothing else to take it's place so we did what we could.

There is a tiny bit of level coming from camera right and then the neg sucking up the ambient frame left. 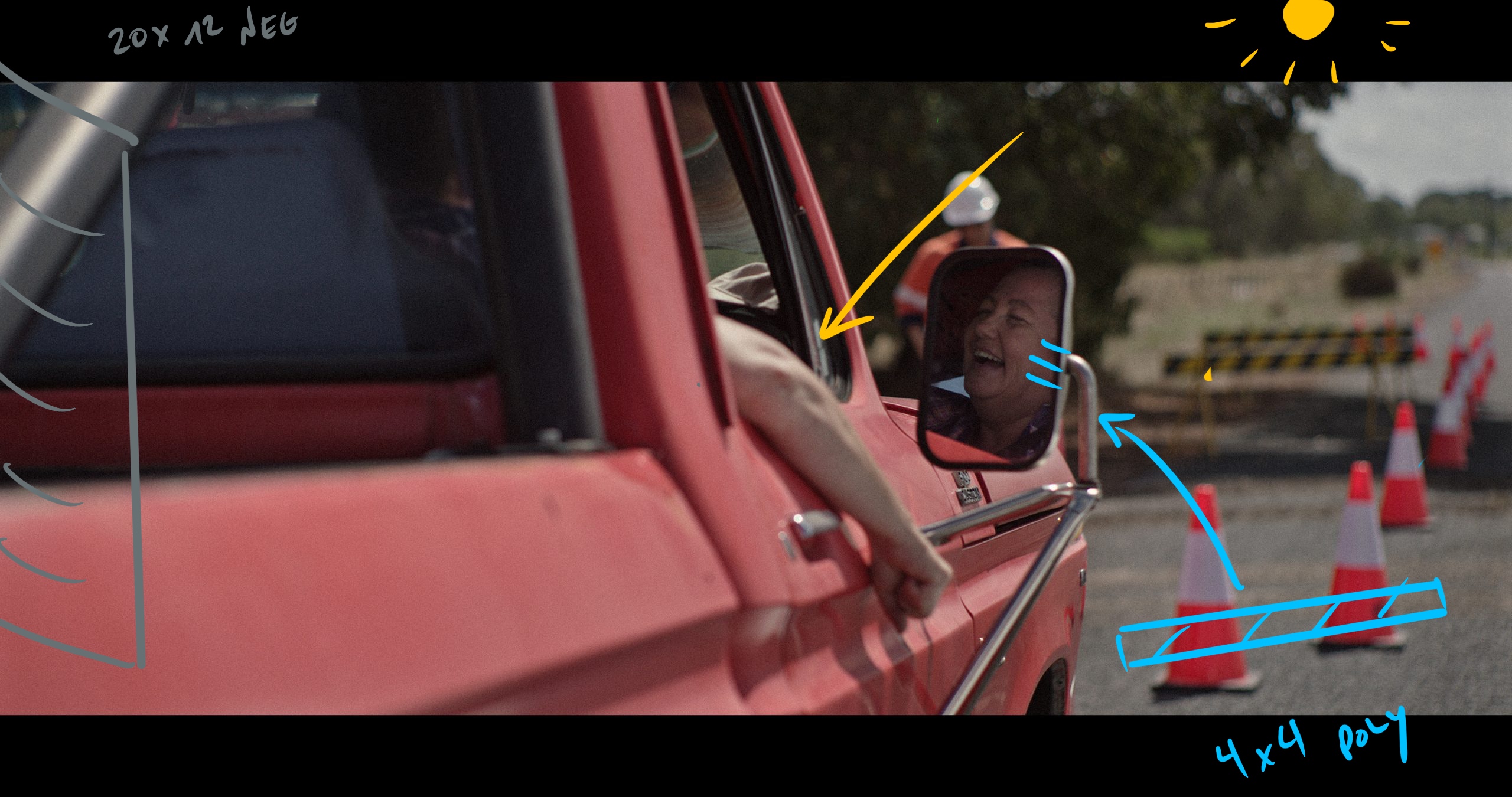 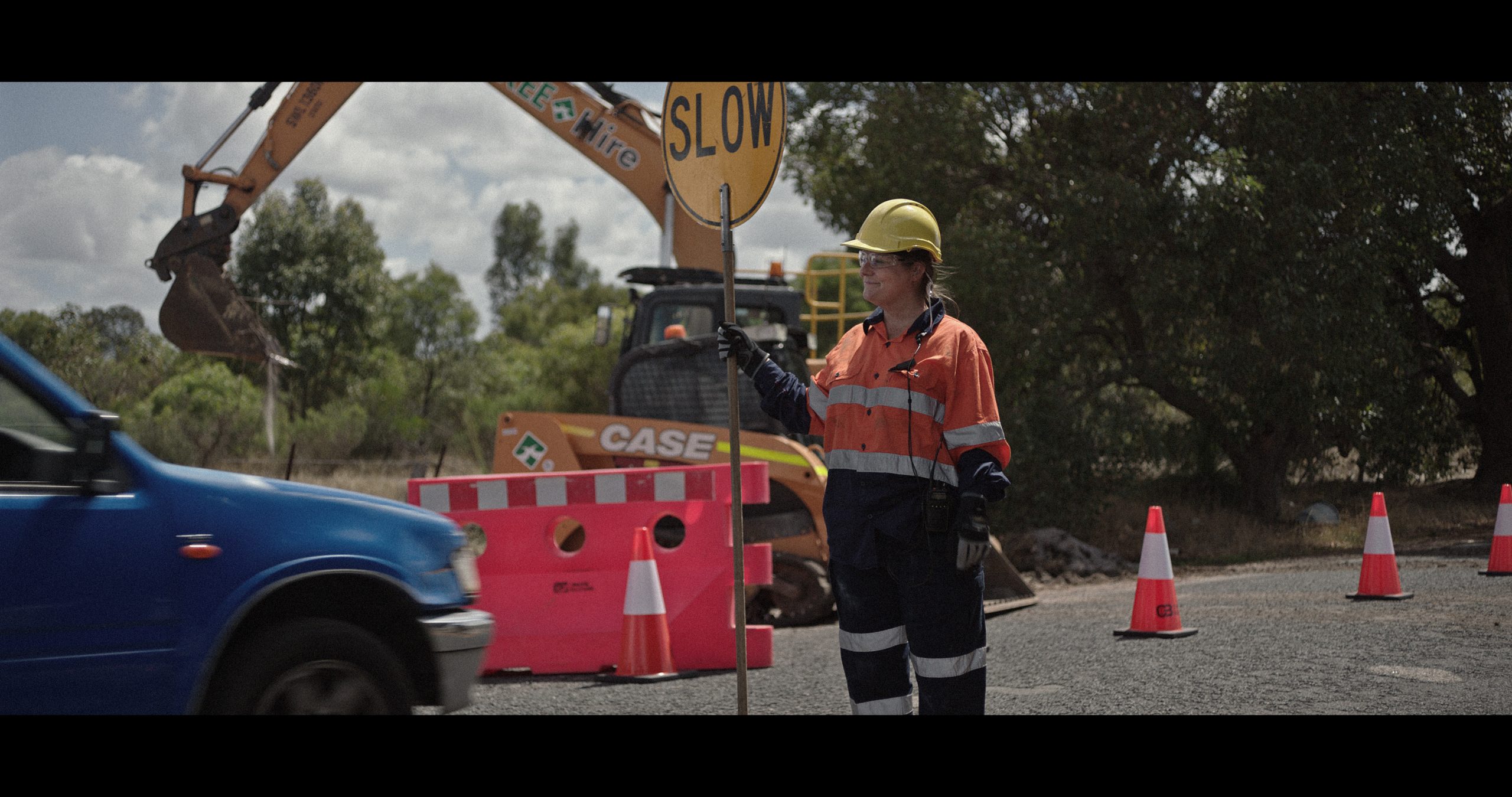 The final shot of the ad as the cars drive off.

We waited until after lunch to try and pull this one off because we wanted the sun behind her rather than front lighting her.

It would have been ideal to wait another hour or two but in the commercial world with small margins and tight days we had to push on.

We used the same set up as the previous road work but we flopped the sides to try and pull some shape out of the high sun. 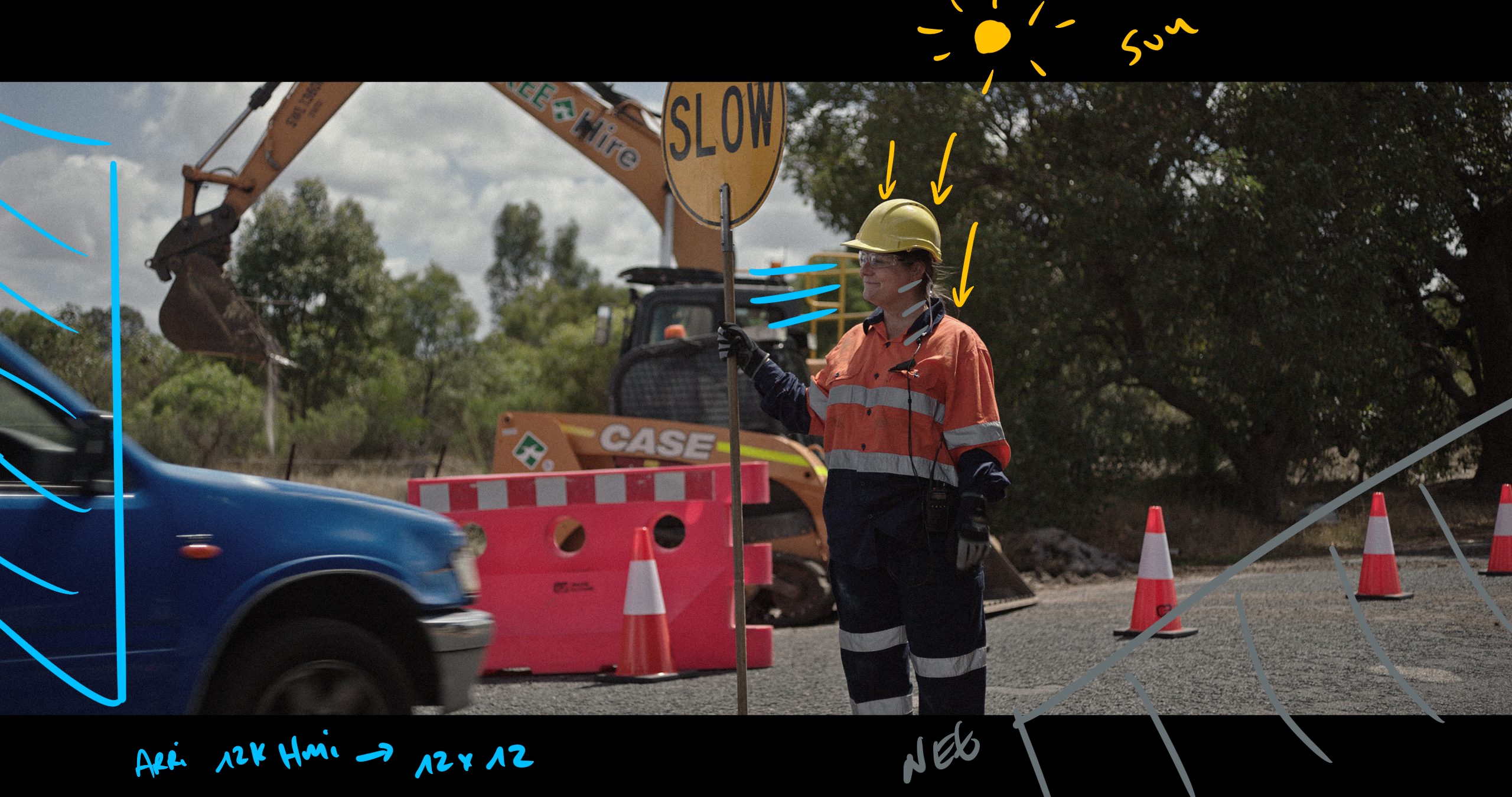 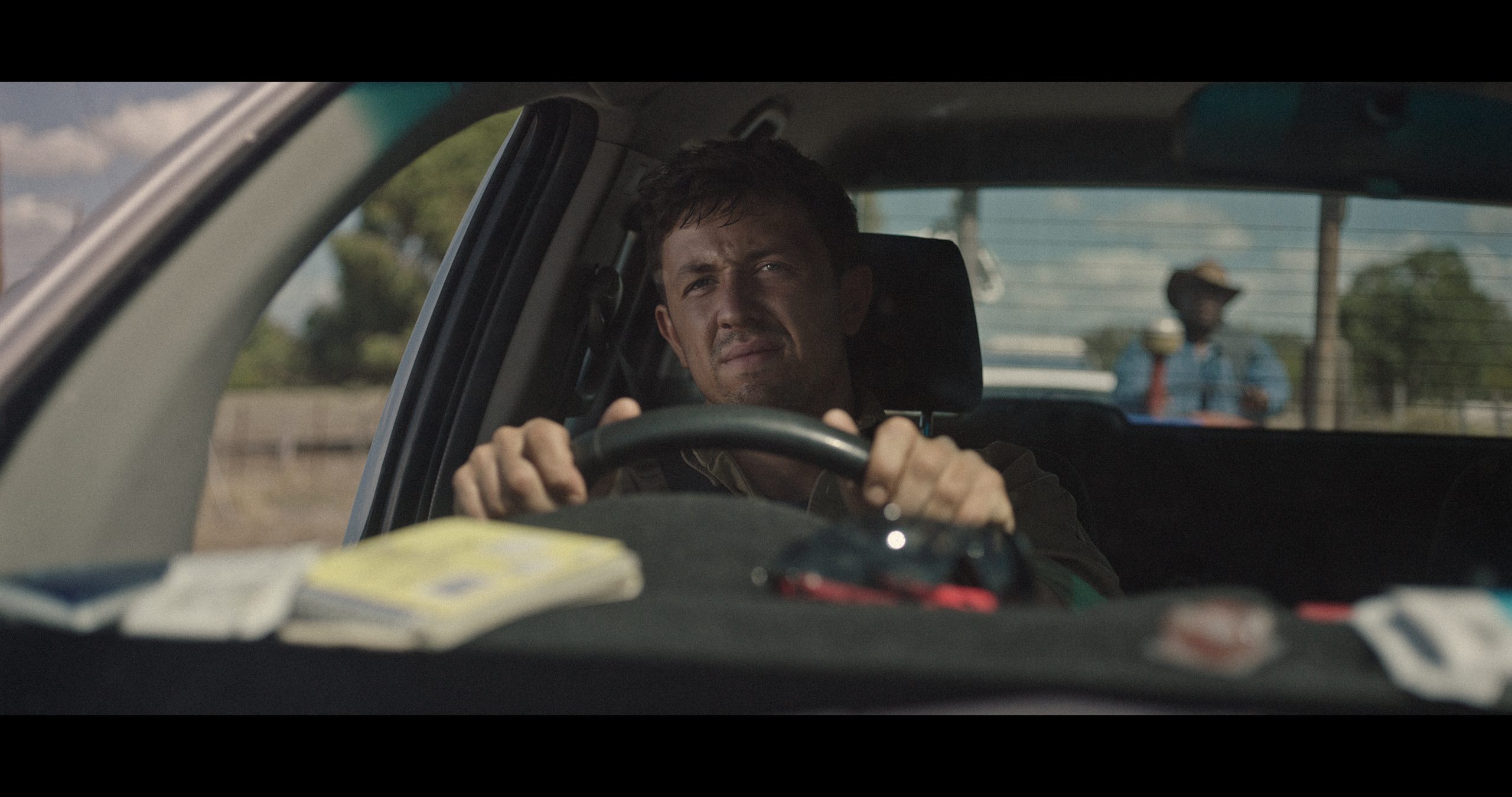 The classic driver push in as they realize somethign is wrong.

If you are a veteran listener of the show you will have seen this shot about 100 times.  It is a very common situation for a DP but I am not sure we have ever done a full 180 sun swap.

Here the sun is coming from frame right as it's the afternoon and we are now facing south.

To stay consistent with the morning footage I wanted to flop the sun side so we used the 12k from frame left through a 12x12 and then blacked out the sun and the car frame right. 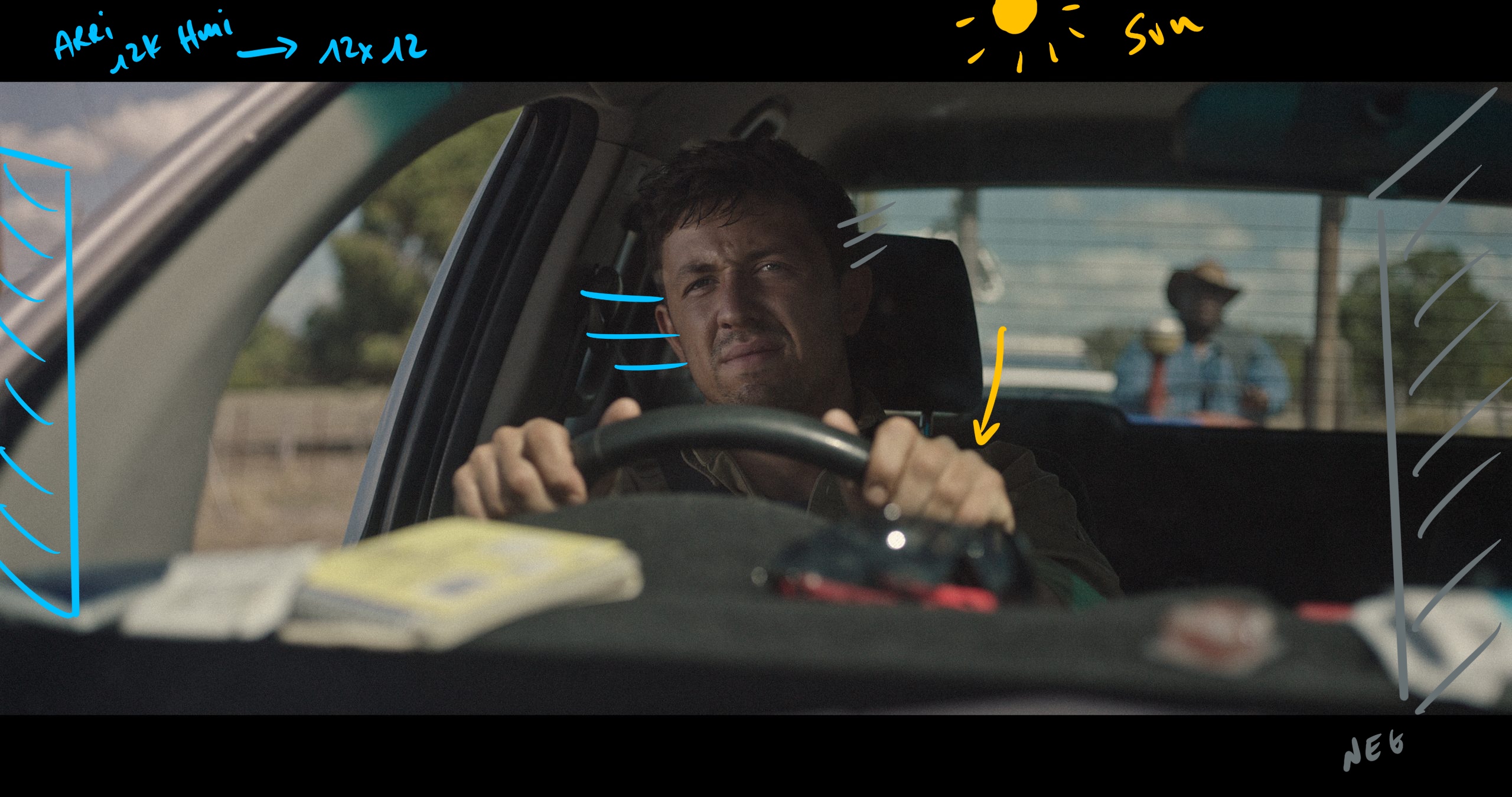 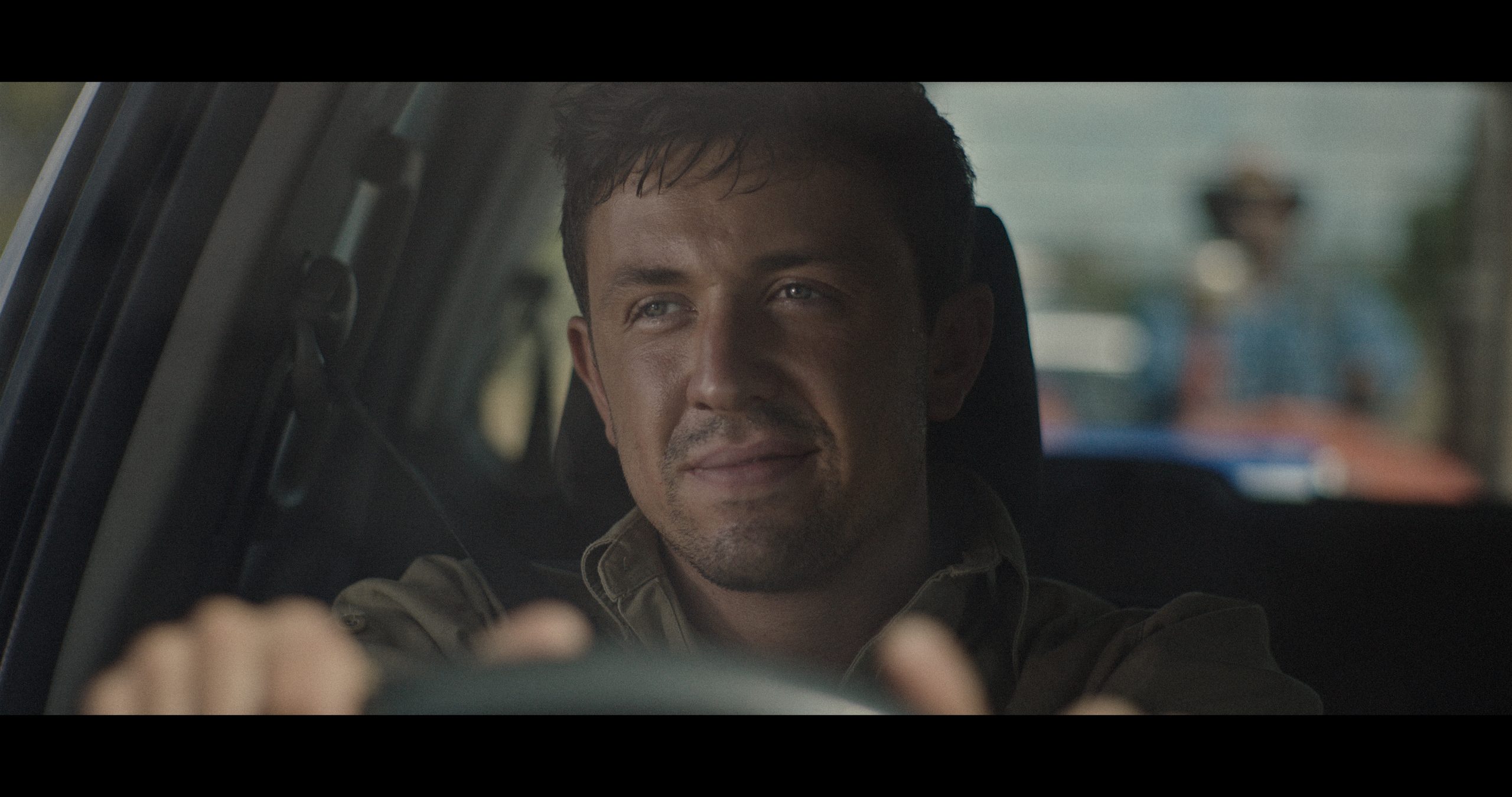 Same as above but tighter.

Same as above but I may have ever so slightly adjusted the neg in the car to let a little light leak in from camera right. 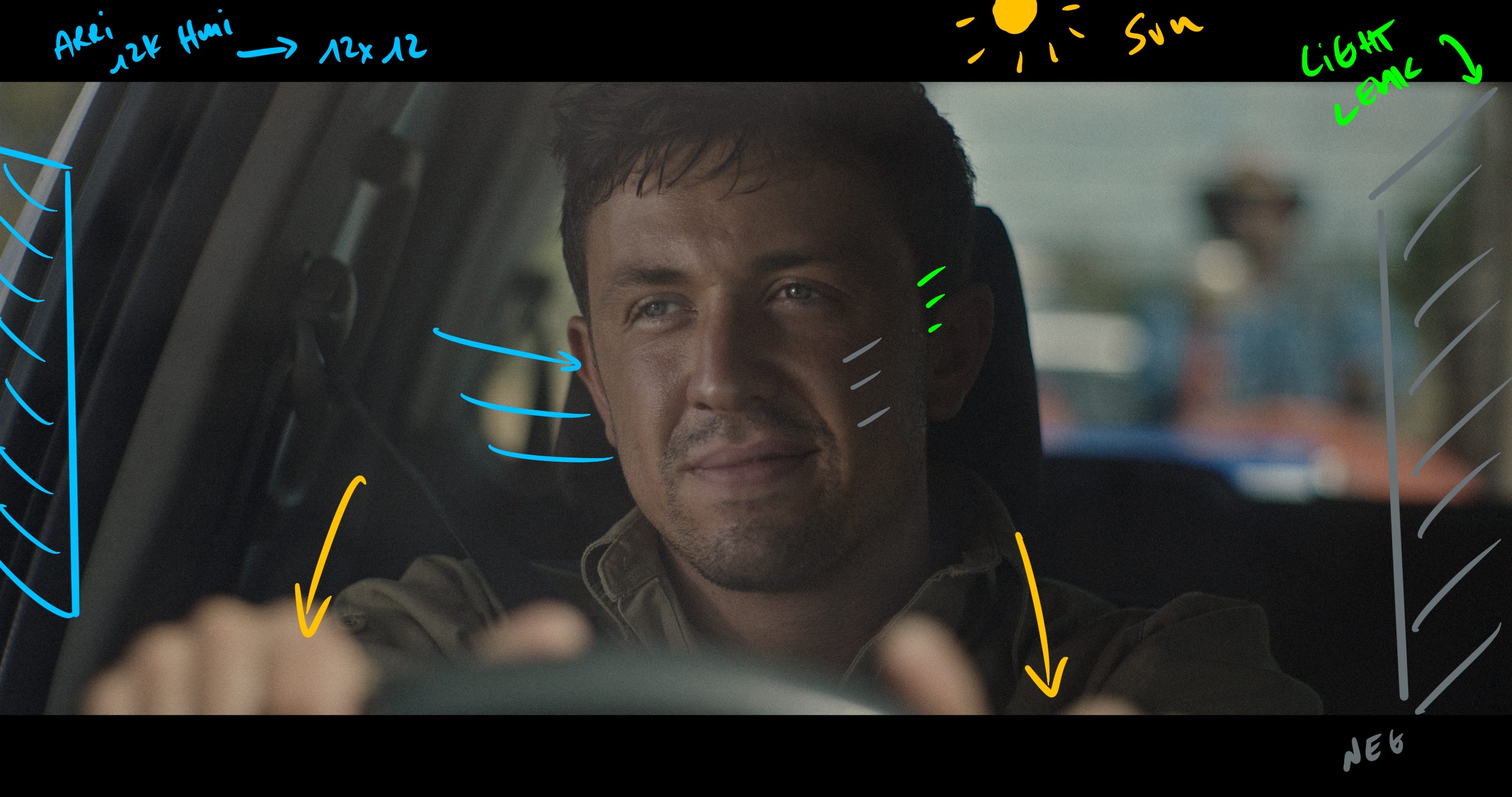 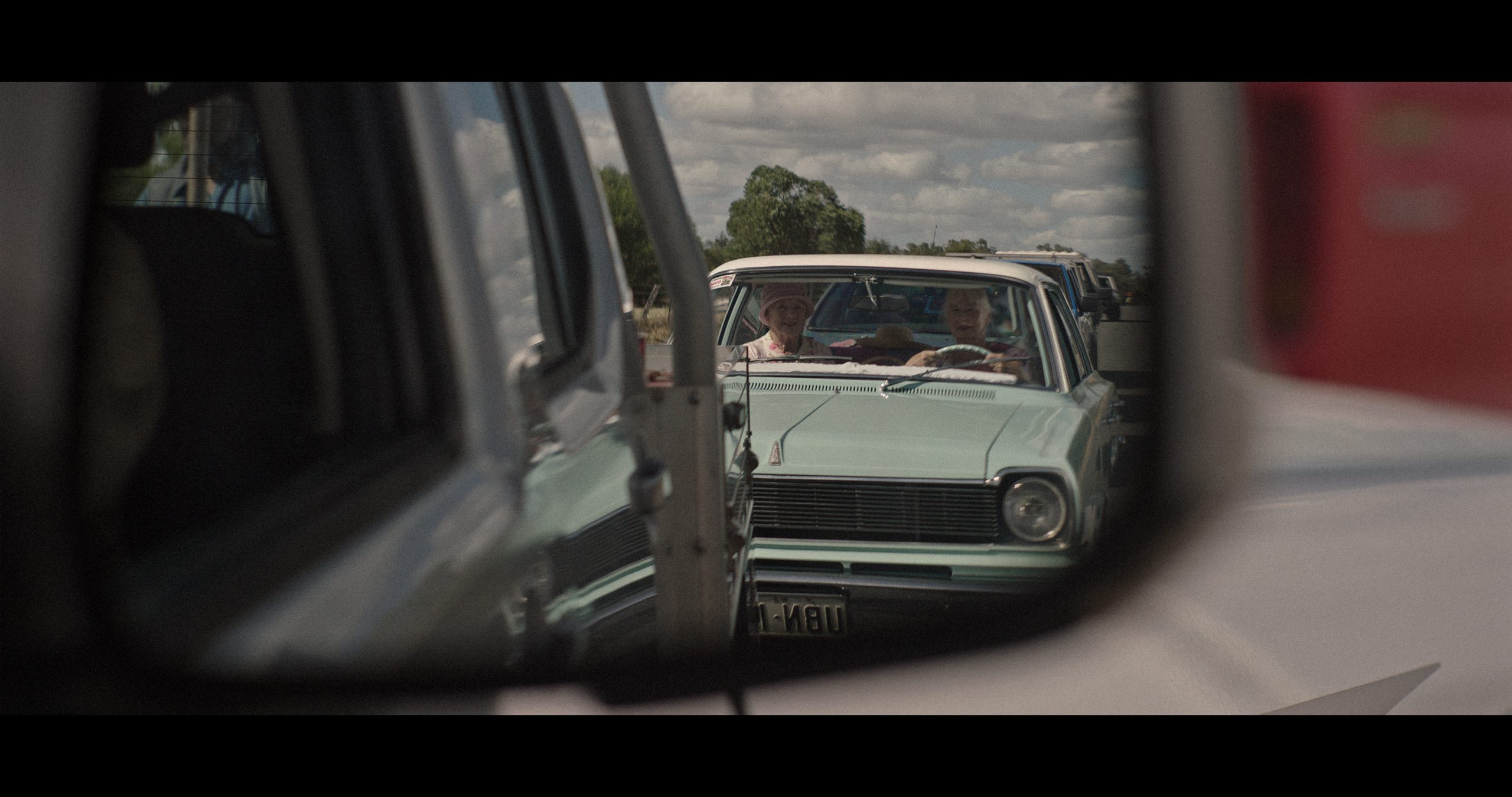 By this point in the day we were really pushing just to get stuff in the can.  There wasn't much lighting to do as we didn't have the time and the angle of the sun and road meant there weren't many options to begin with. 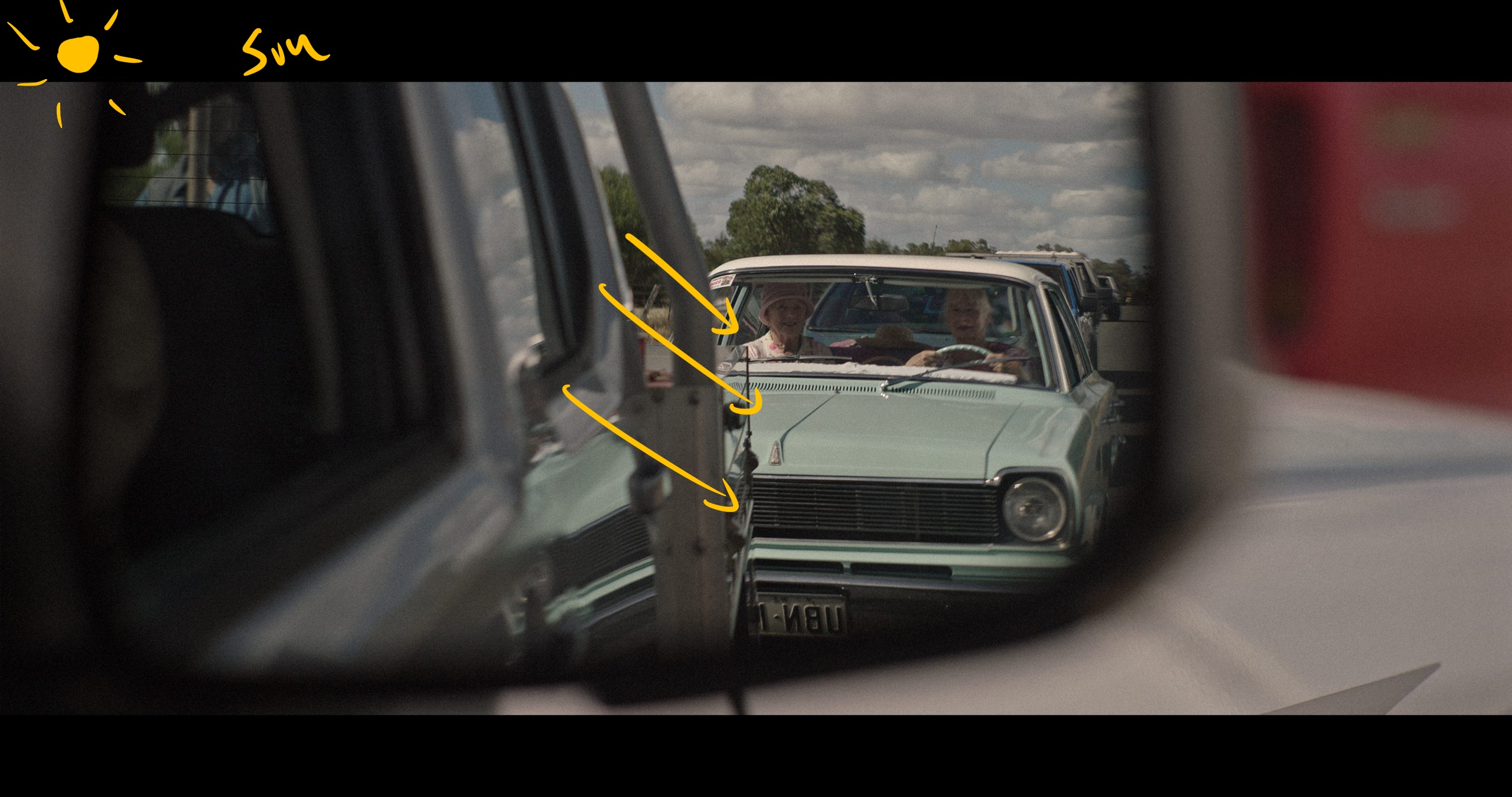 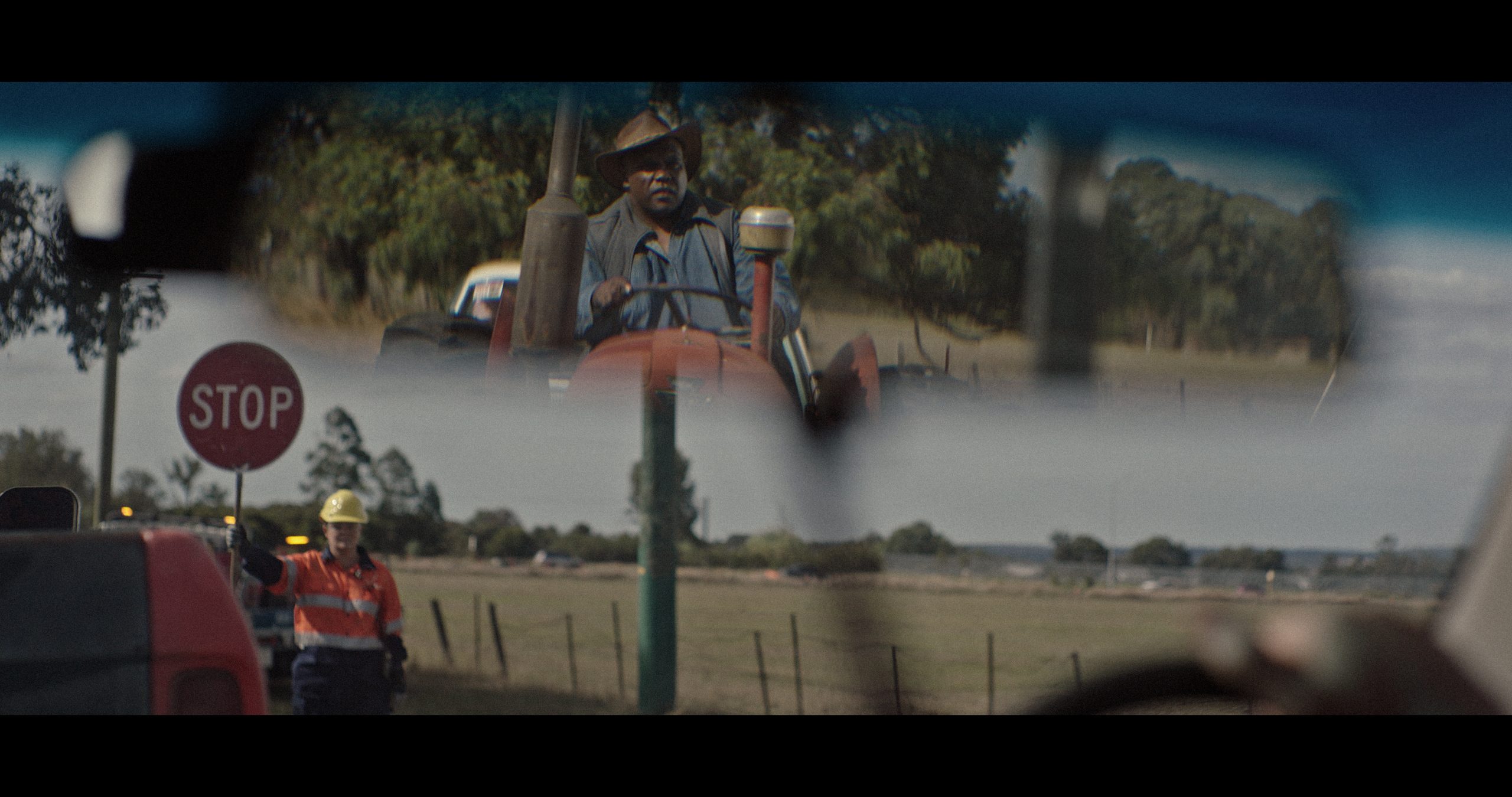 This is my least favorite shot to shoot.  The rear-view mirror shot.

It always takes 5x longer than scheduled for and the results are always just ok.

We did bounce a little something from frame left.  The dreaded fill side bounce because the contrast with the hat was so crazy.  Probably a 4x4 poly just under the frame. 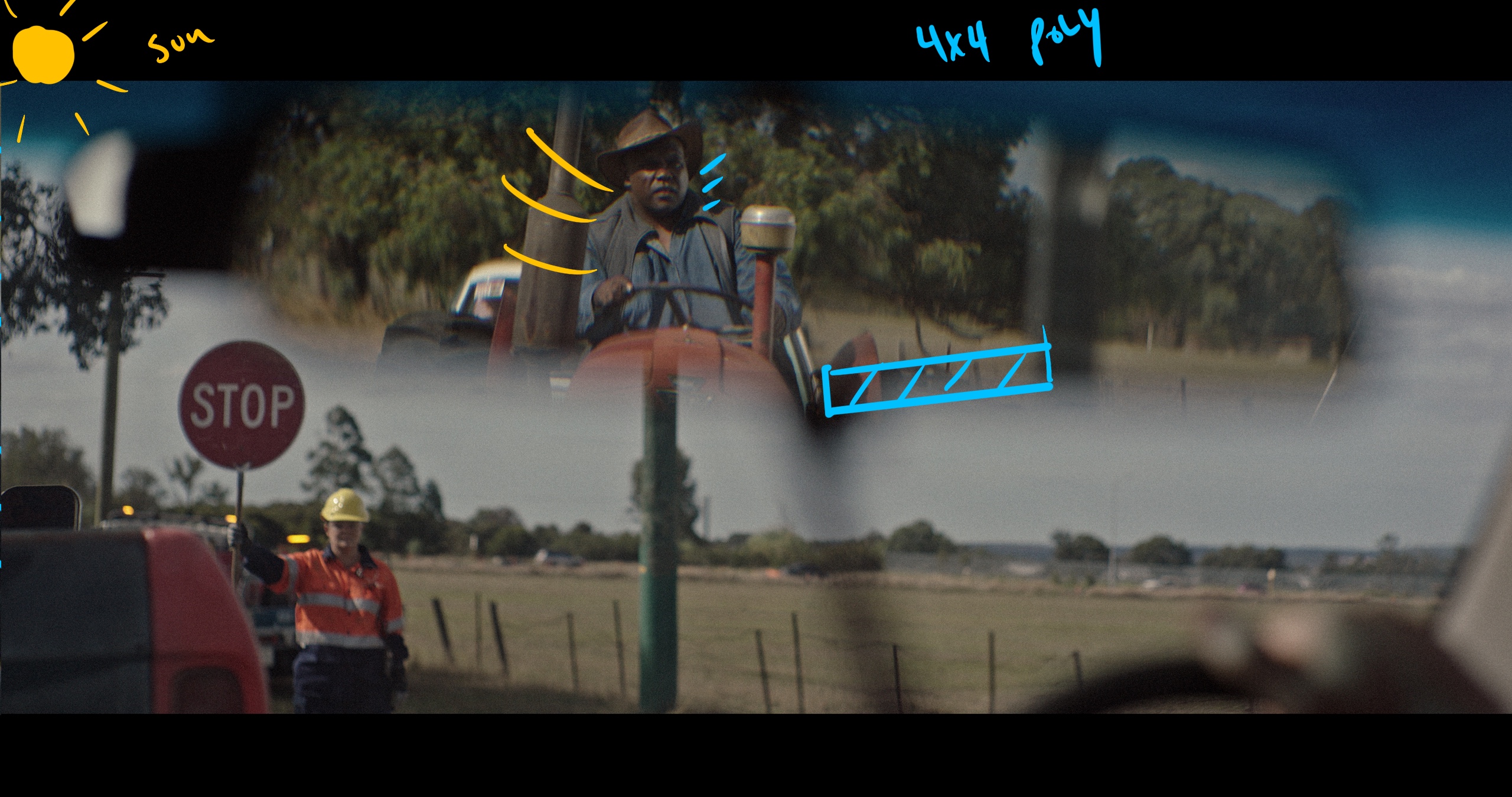