This week on the podcast we look at the infamous Friday shoot day in the commercial world.

Friday's are famous for being the worst days for DPs as productions that shoot over the course of a week may experience schedule issues during the early part of the week and any scenes or setups that need to be pushed back get lumped together on Friday.

This means you very rarely get the time of day you want or the location you want to get the look you are after as a cinematographer.

Which is why it is a great opportunity for us on the show to look at what happens when the trusty framework is just not possible due to factors outside of your control.

Enjoy the BTS look at a recent spot!

I am a big fan of Phedon Papamichael's work and this week over on the Patreon breakdown we look at a polished looking piece of film in The Monuments Men.

Shot on a combination of 35mm film and Alexa it is a great opportunity to see the differences and Phedon's work shows off just how much a skilled cinematographer can bring to a film.

Lots of great scenes to talk about so make sure you jump over to the Patreon site and check it out.

The main action we are focusing on today is a guy in a car pulling p to his house and a neighbourly interaction between 3 people in their front yard.

We shot this spot on the Alexa Mini LF with Arri Signature Primes.

The Signature Primes are far and away my favorite full frame lenses and don't let the size fool you.  They are surprislingly easy to manage and are actually much lighter than they look.  A beautiful range of focal lengths means no complaints from me. 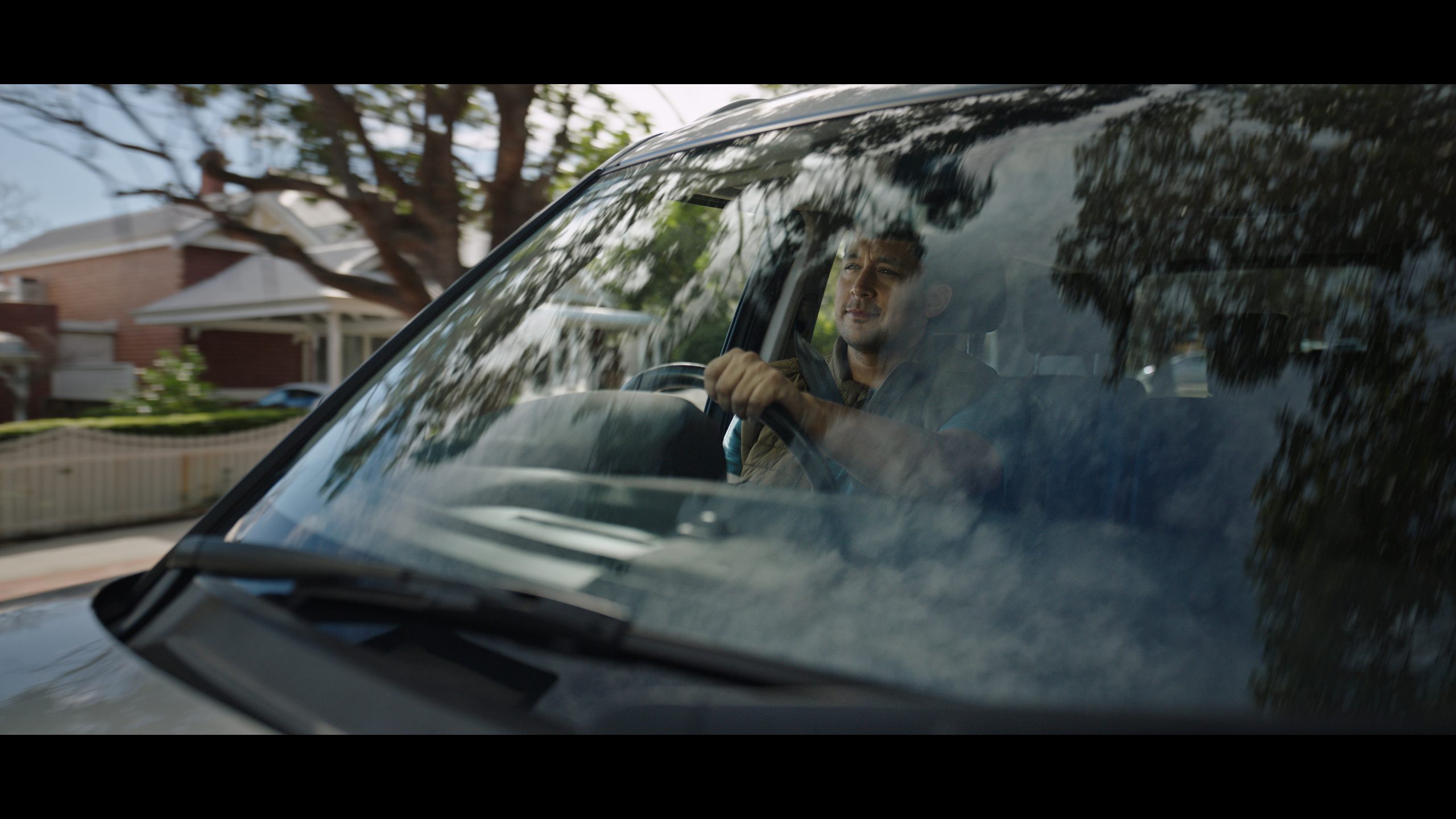 The Camera is mounted to the hood of the car and wide enough to be able to get a sense of the passing suburban streetscape.

This shot came down to location and time of day.  We knew we needed backlight so it was an afternoon set up and the angle of the road also helped maintain the ratios we were after.

The only light is a Creamsource Vortex mounted frame left in a small chimera.  We used the Arri circular polarizer to set the desired level of ambient windshield reflection. 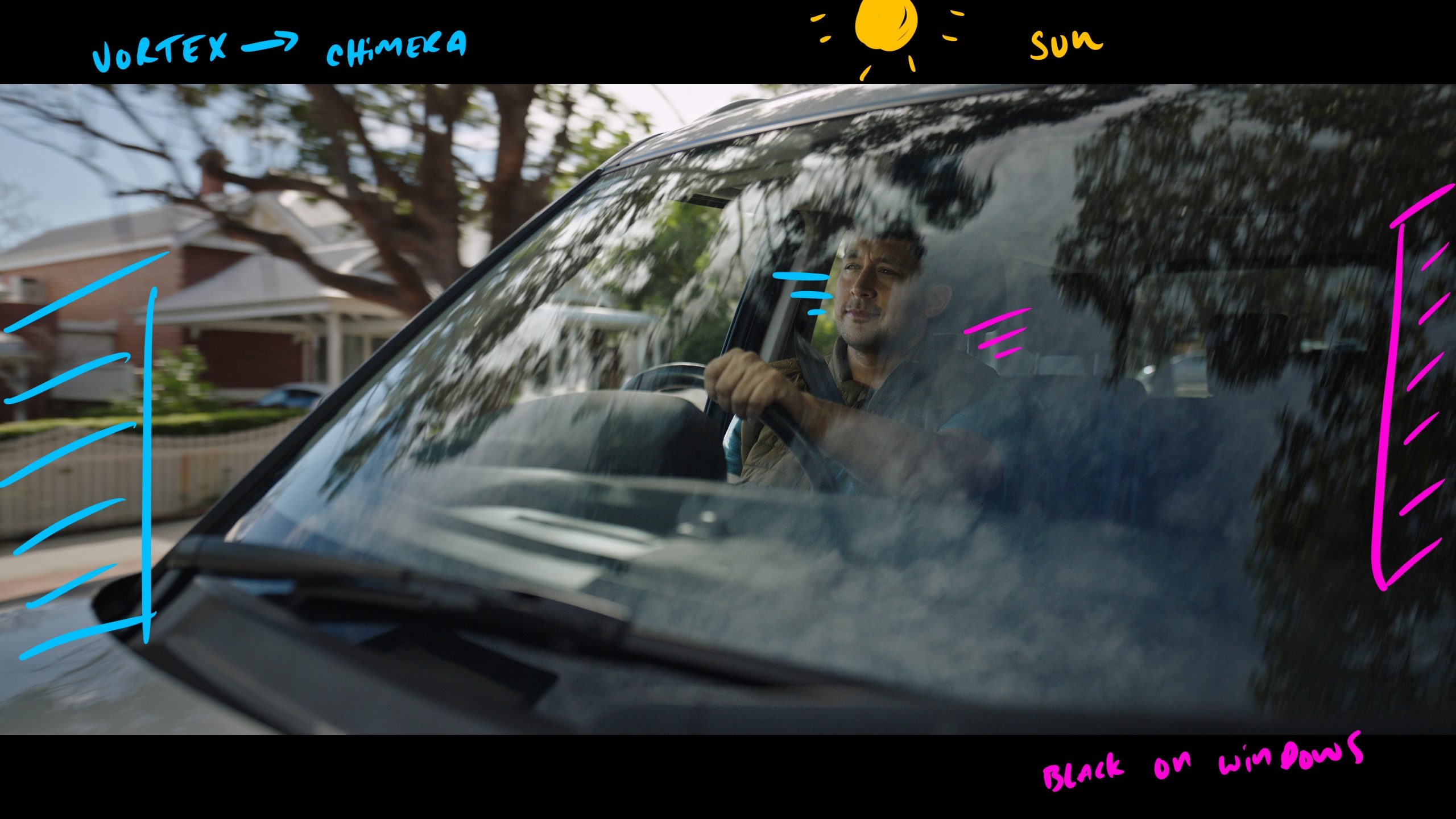 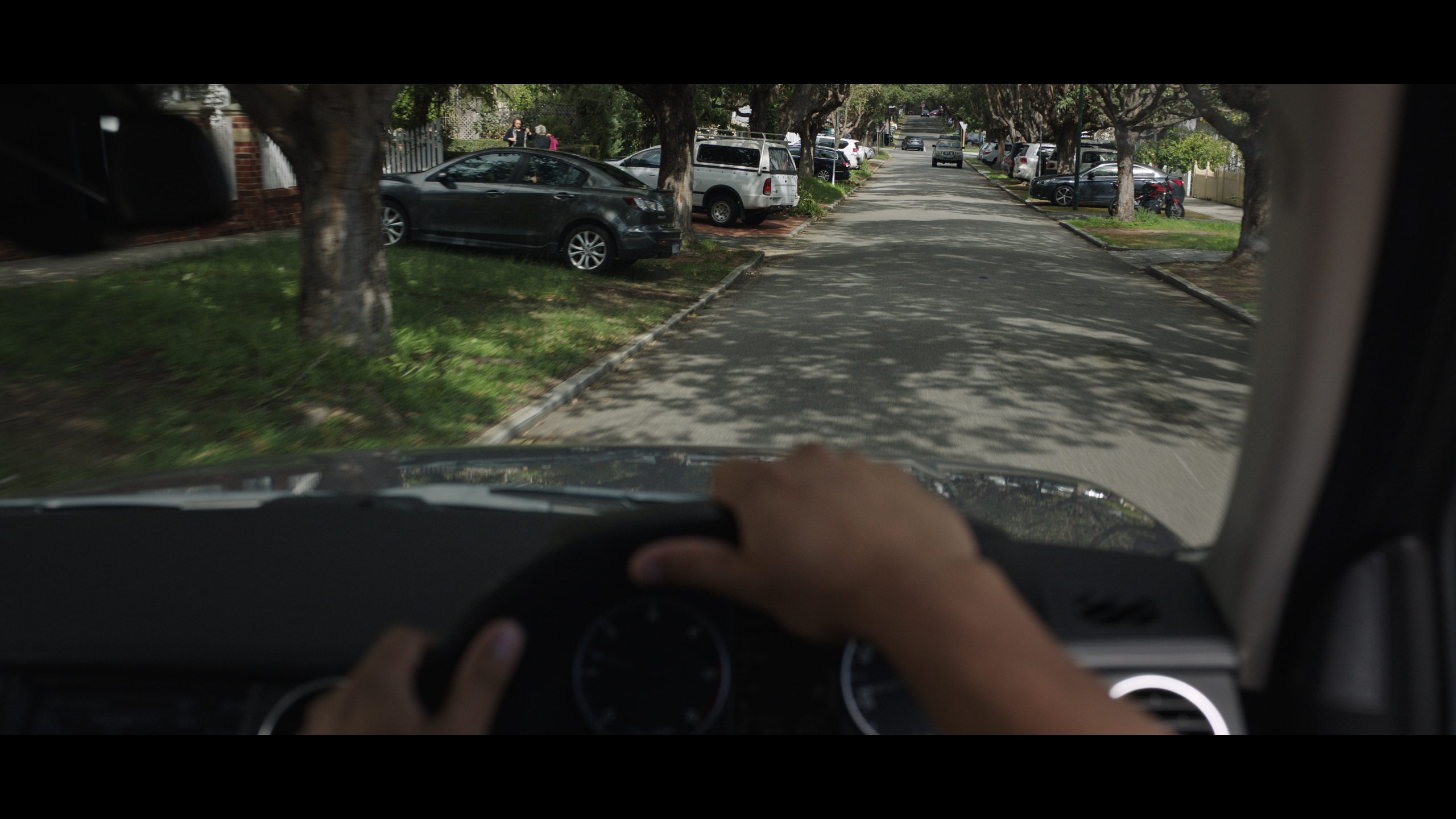 POV shot of the driver pulling into his parking spot.

We had some litegear strips above the dash to balance out the darkness of the car interior with the toppy exterior light on the road. 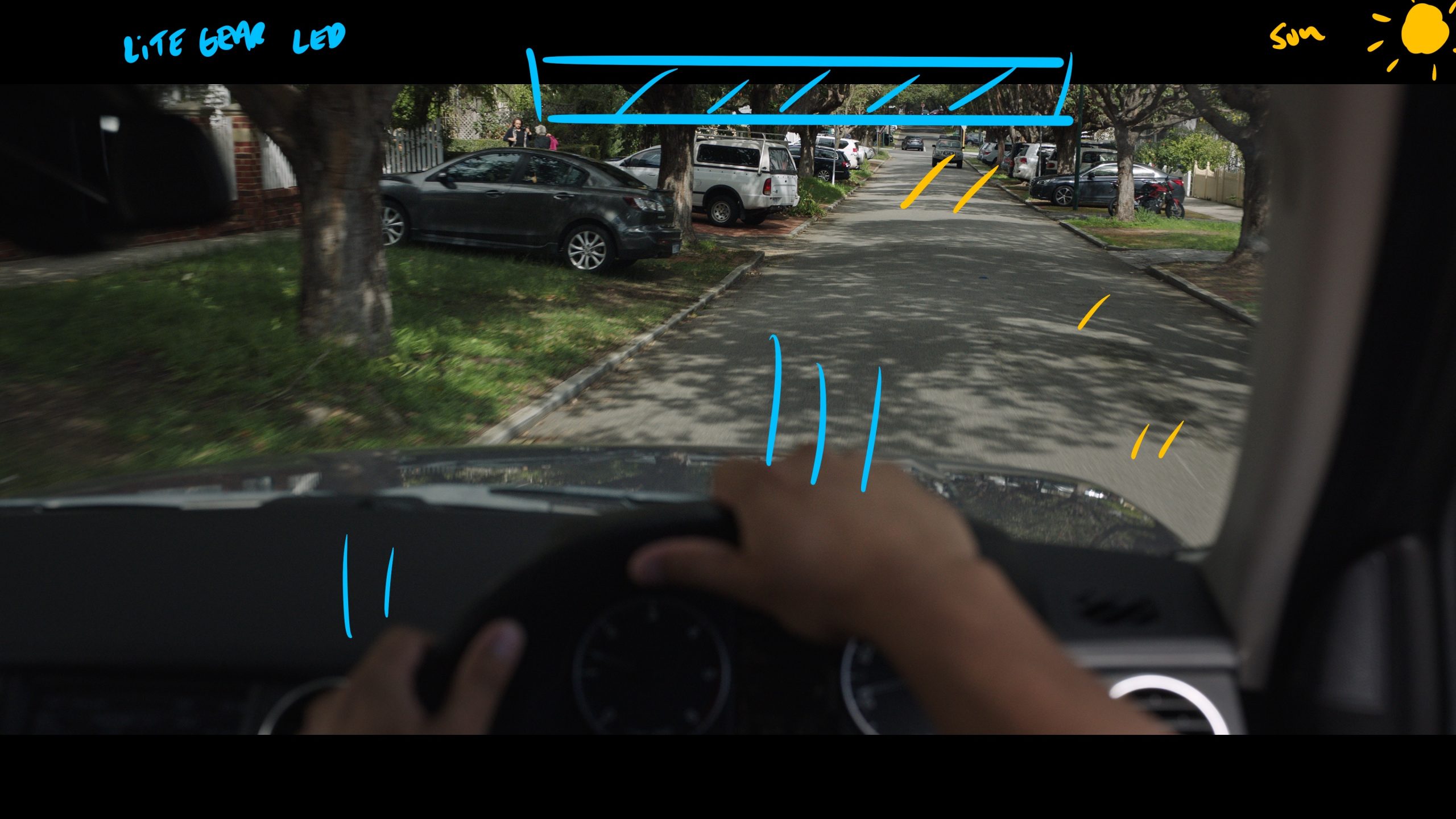 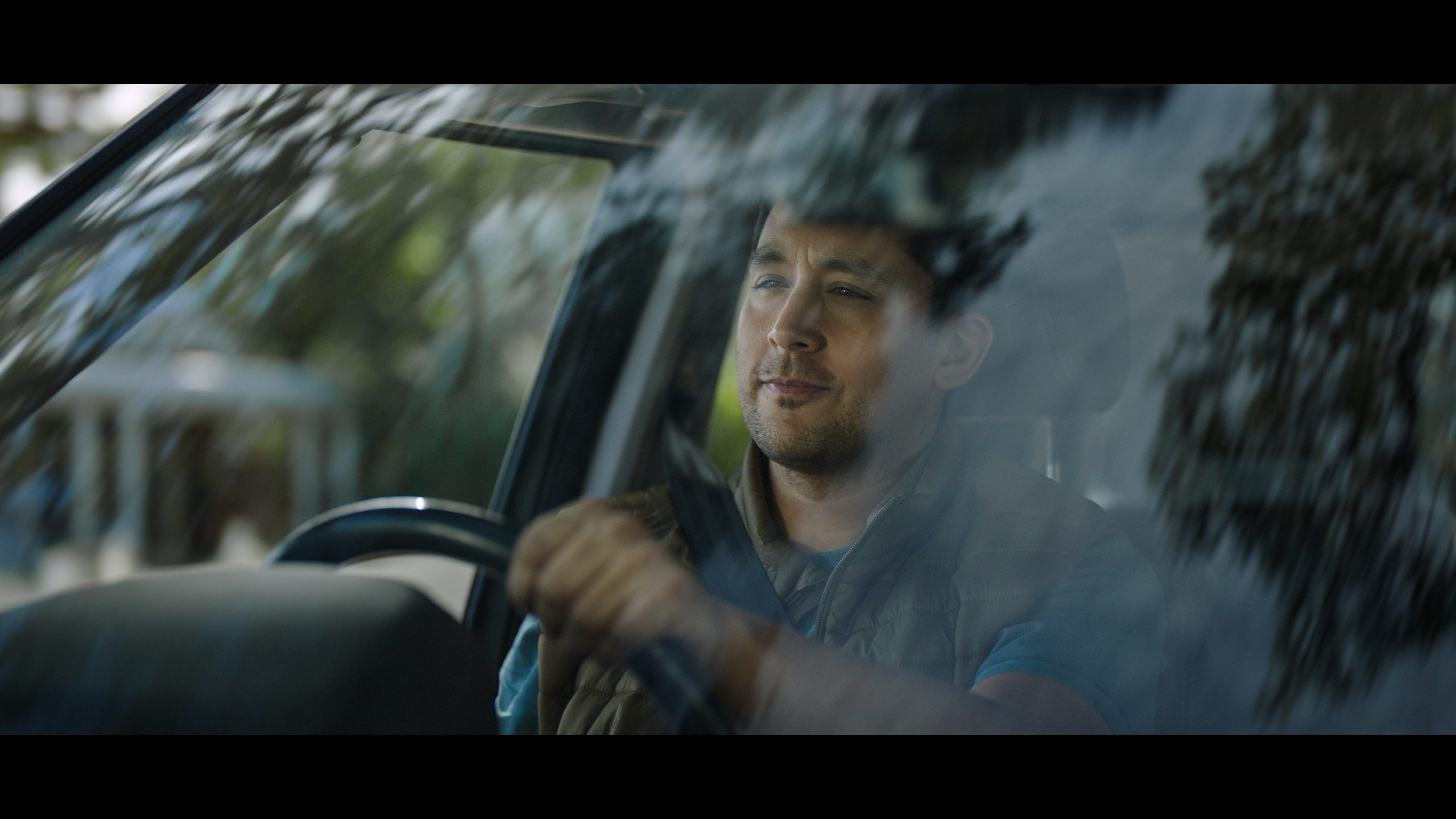 Same set up as shot #1 but know we upped the focal length which meant we could bring the Vortex closer.

THe Vortex was know brought closer so we got a little bit more wrap out of it.  The heavy green cast is a combination of the light, the filters, the windshield and the heavy foliage along the street

I think I prefer the contrast levels in shot #1 so we probably should have just left the light were it was initially. 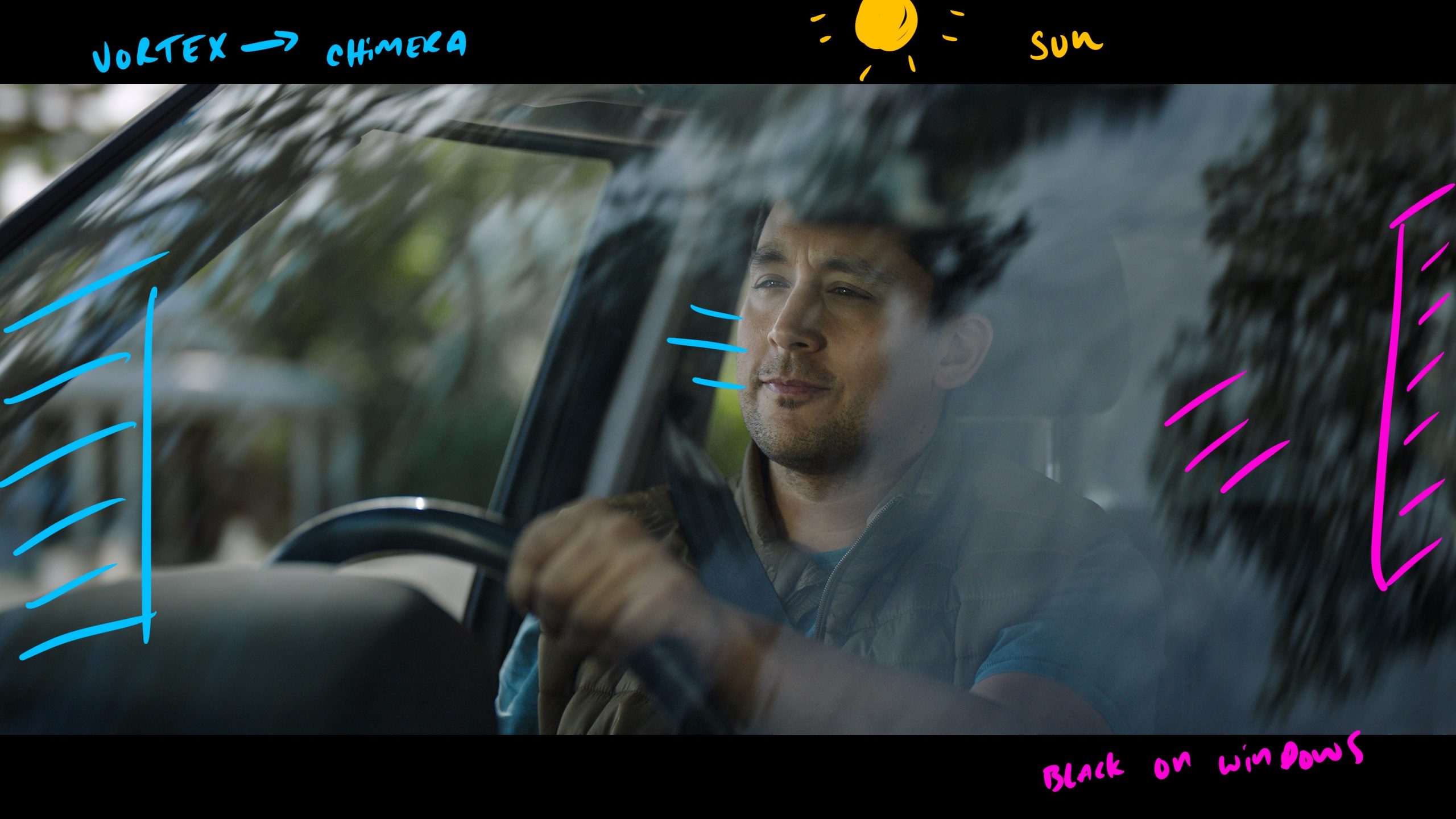 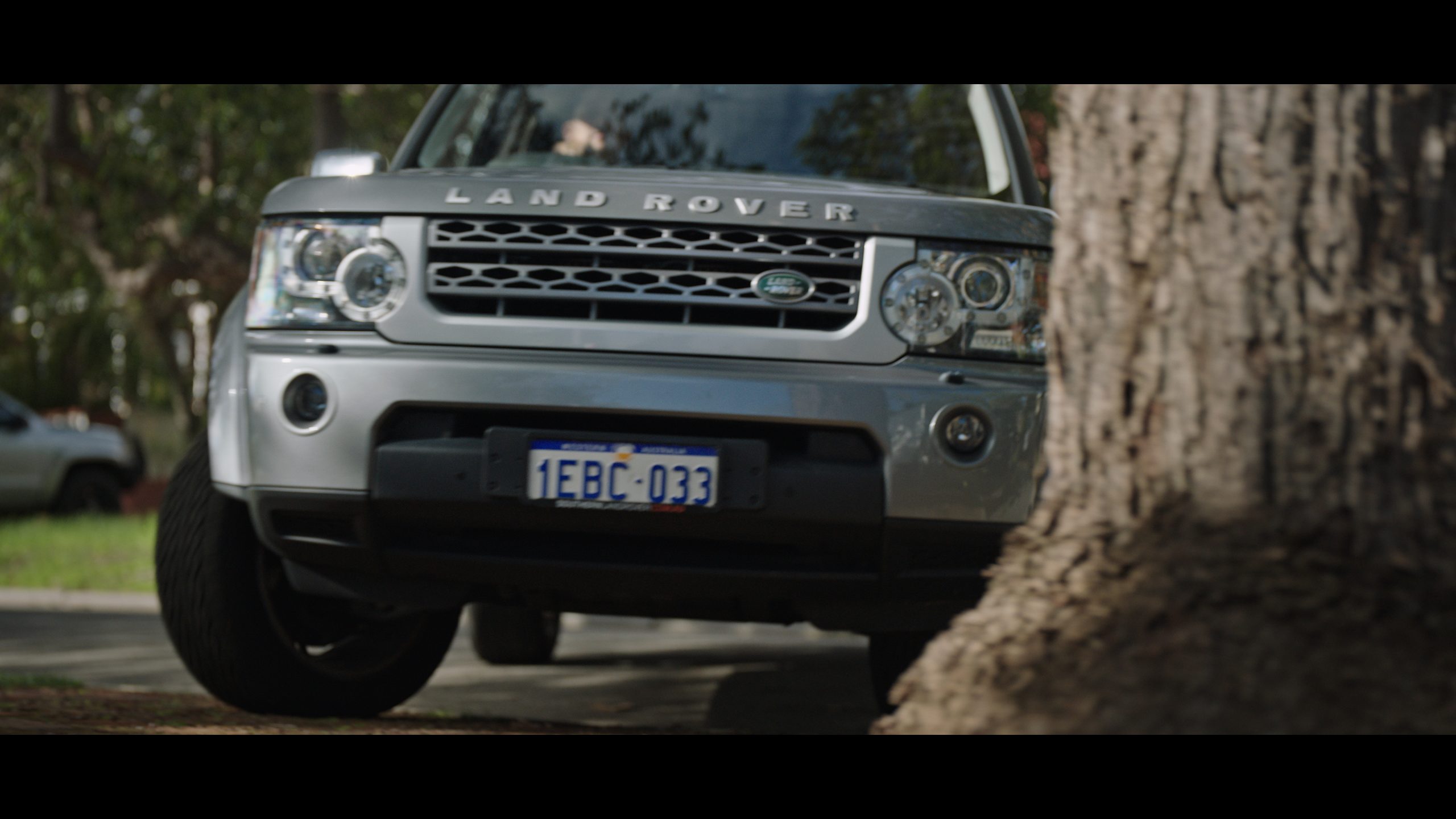 The camera dollies from right to left and wipes past the tree as the car mounts the curb and pulls up to it's park spot.

We balanced the bare sunlight hitting the foreground tree with the background by adding a 8x8 hi-lite diffusion and knocking a little bit of harshness out of the tree.

The rest is ambient light levels from the street and setting the exposure to the background area. 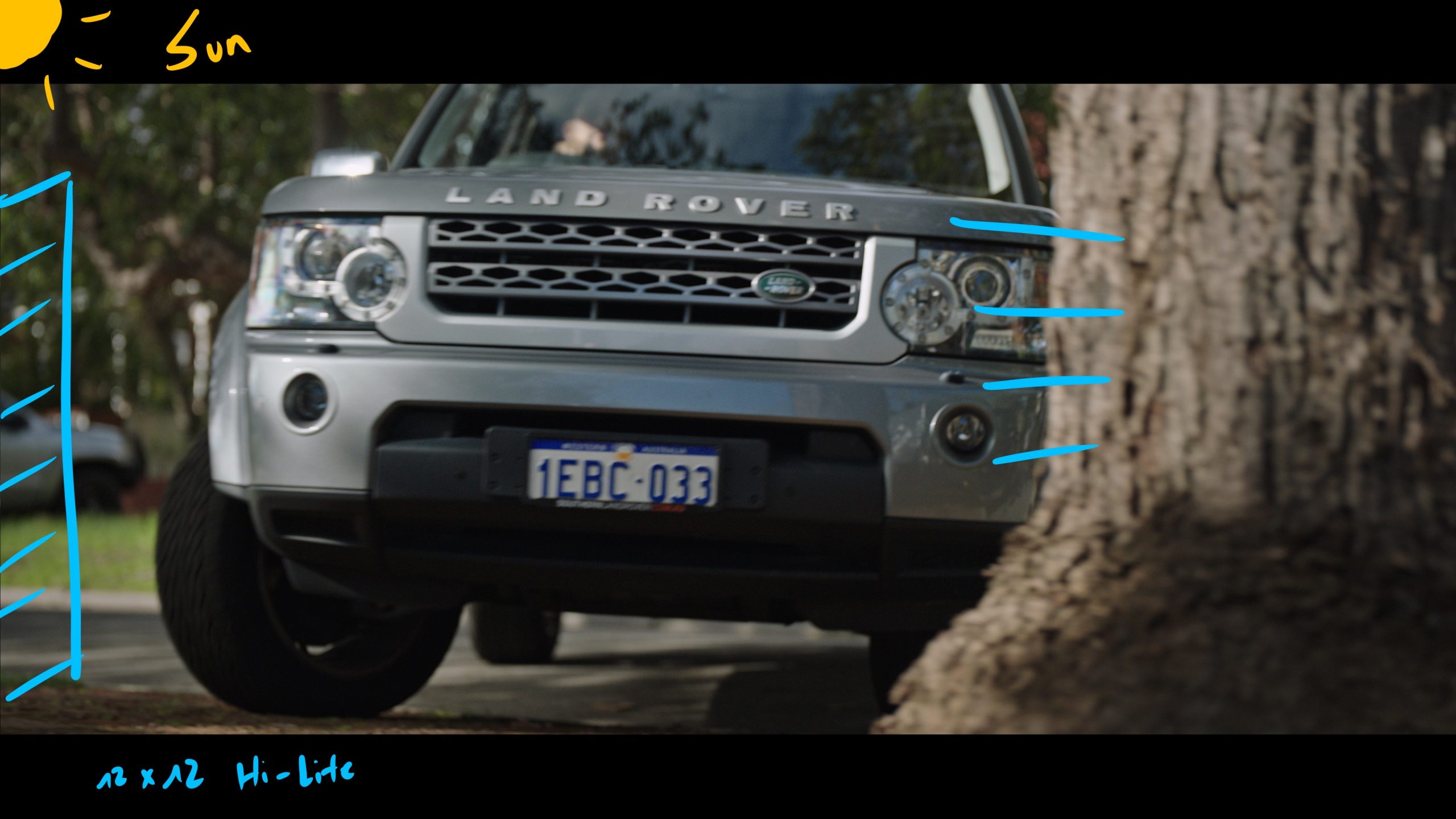 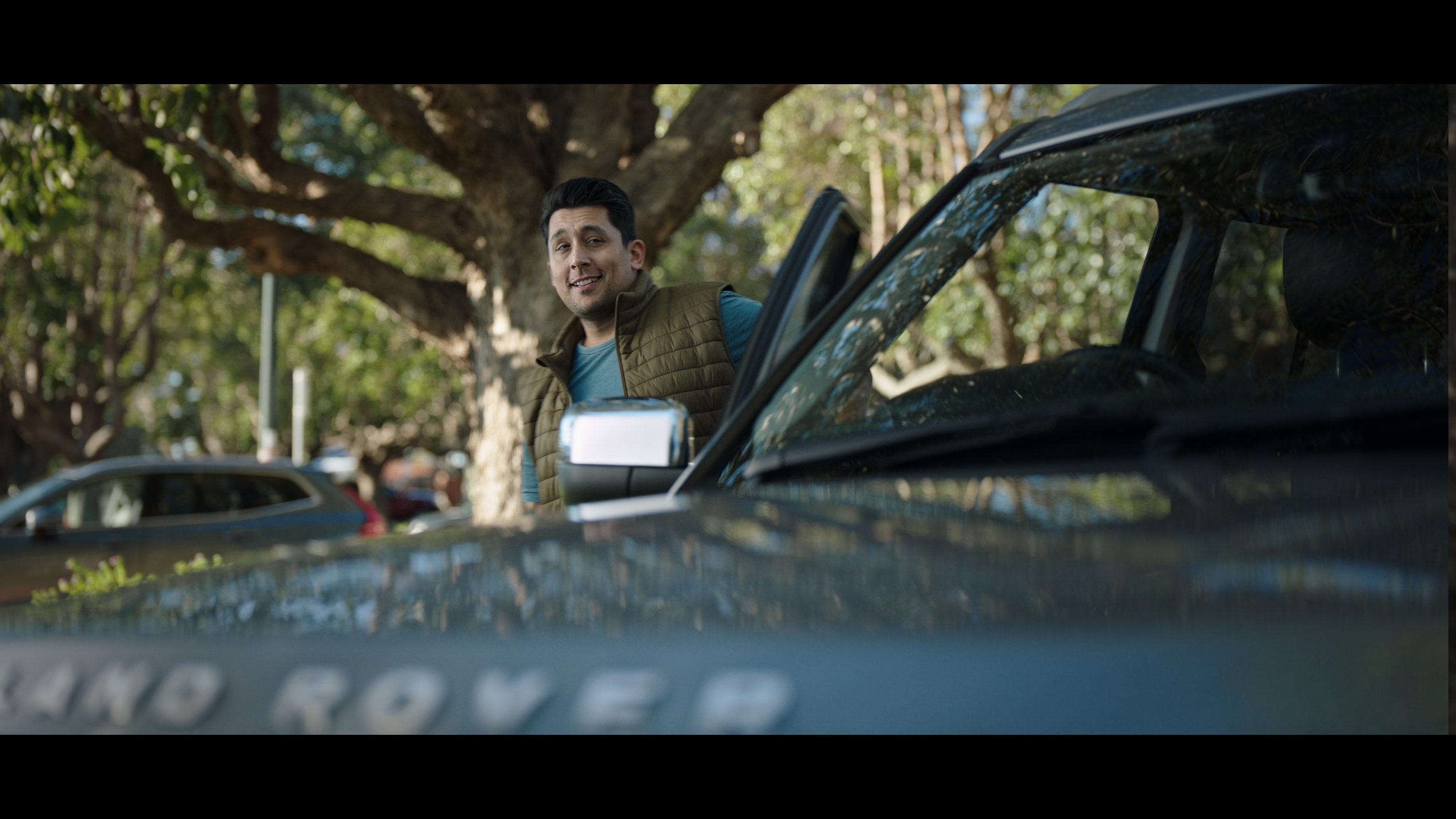 Our talent exits the car and steps around the front.

This shot was by far the trickiest as there was zero space anywhere around the car.
We used an Arri M90 bounced into a 12x12 of ultra bounce to project enough level in the foreground to be able to keep the BG sky from clipping.

WE tried to shape it as much as possible but the limited space meant there wasn't much we could do.

As the talents walks closer to camera a net was used to make sure the light wouldn't give itself away. 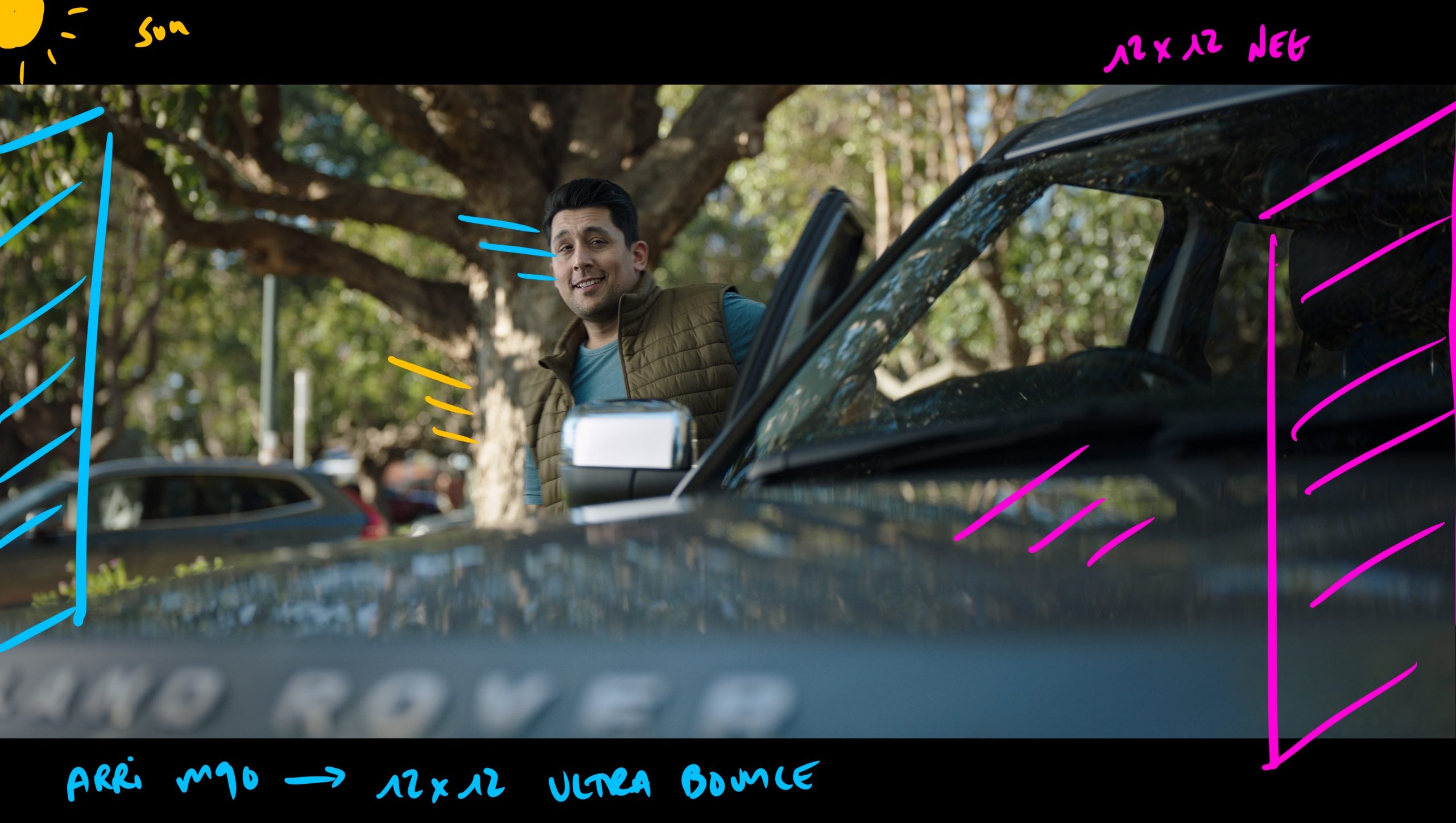 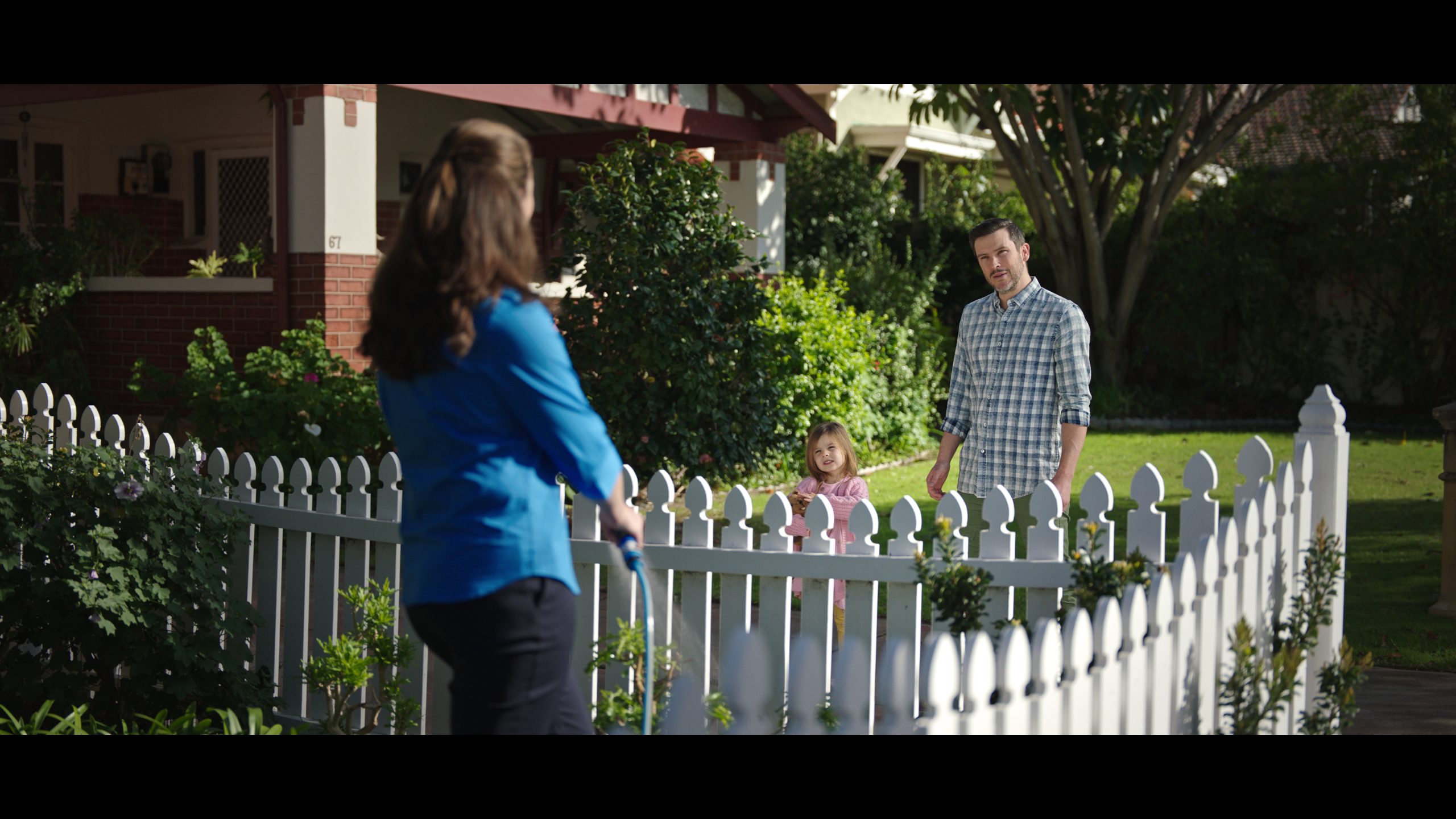 The master shot of father and daughter chatting over the fence with their neighbor.

Originally this sequence was scheduled for another day and another time but things moved with weather issues so we had to shoot this location in the morning rather than the afternoon.

These two houses were east facing in the front so that meant early morning front light.

WE used a combination of bounce and diffusion to create as much shape as possible.

There is a 12x12 of Hi-lite frame right plus a 12x12 of ultra bounce to wrap the side sunlight around the talent's face.

Frame left there is a 12x12 neg and some other bits and pieces of neg frame right to cut light off of the foreground fence. 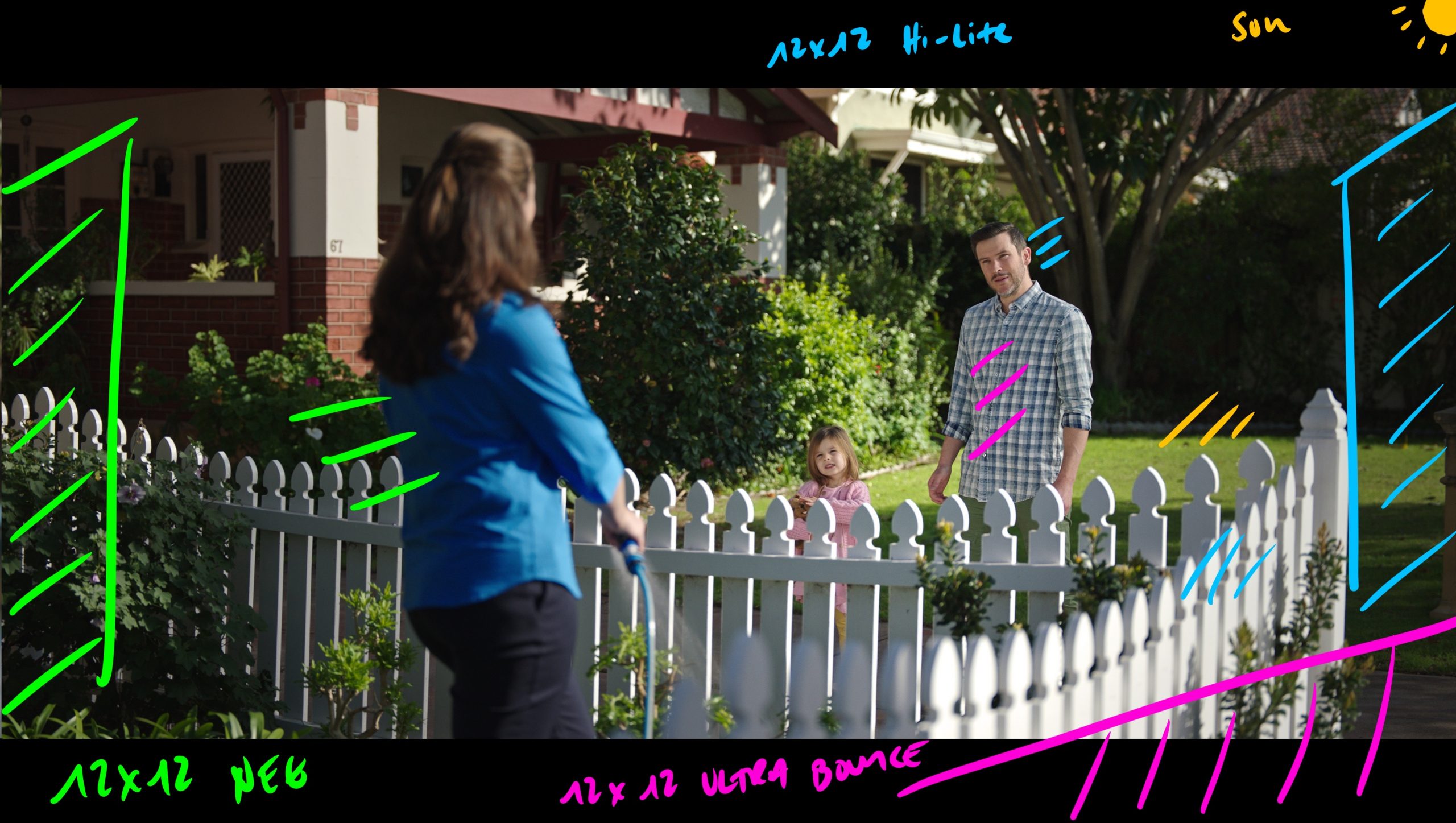 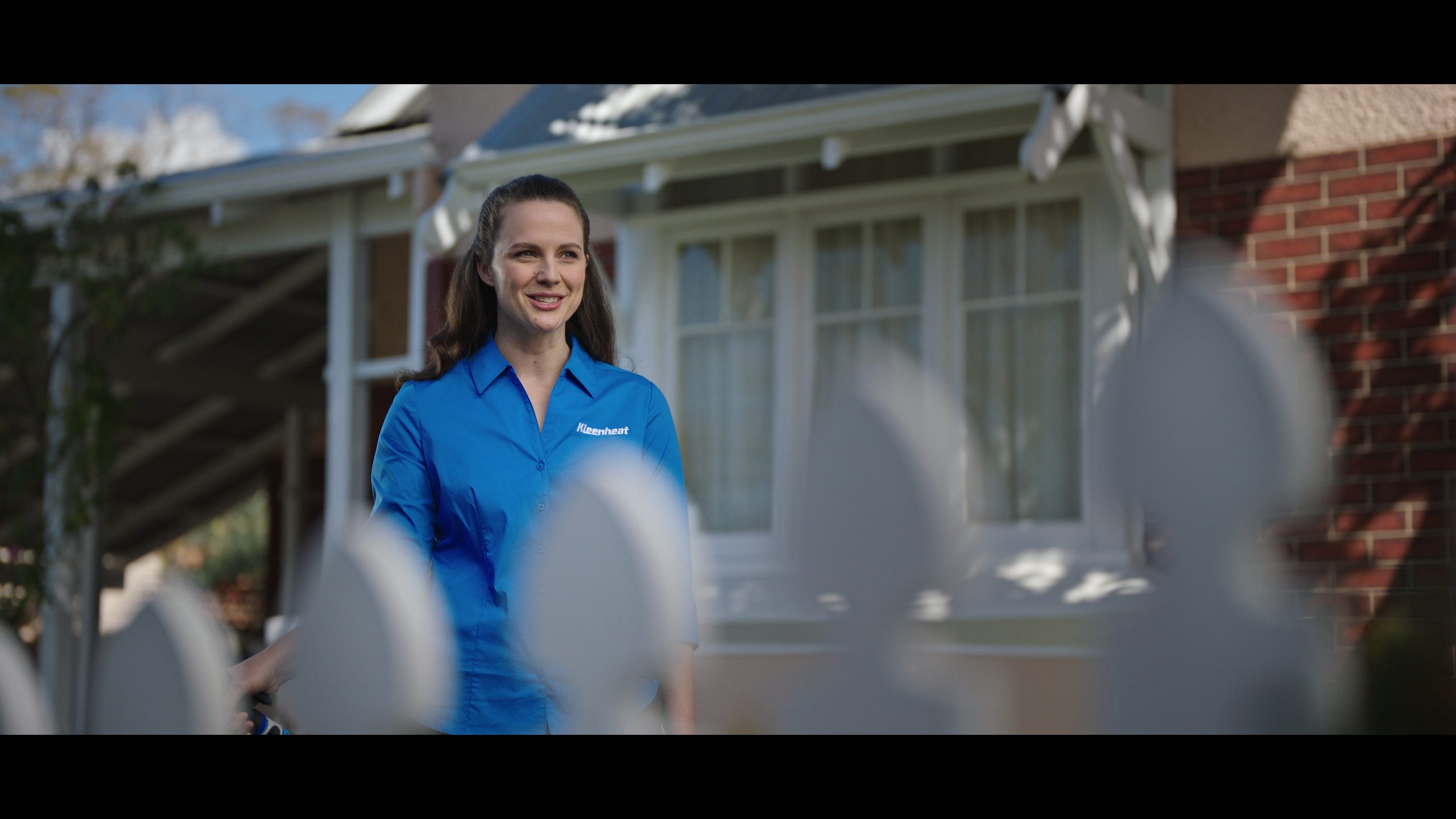 Mid shot of the female talent.

Here the sun had come up a little so we used the Hi-lite as an overhead and then used Neg all around the camera to soak up the ambient fill light.

Frame left we had a 4x4 CRLS to bounce the sun in as a back edge. 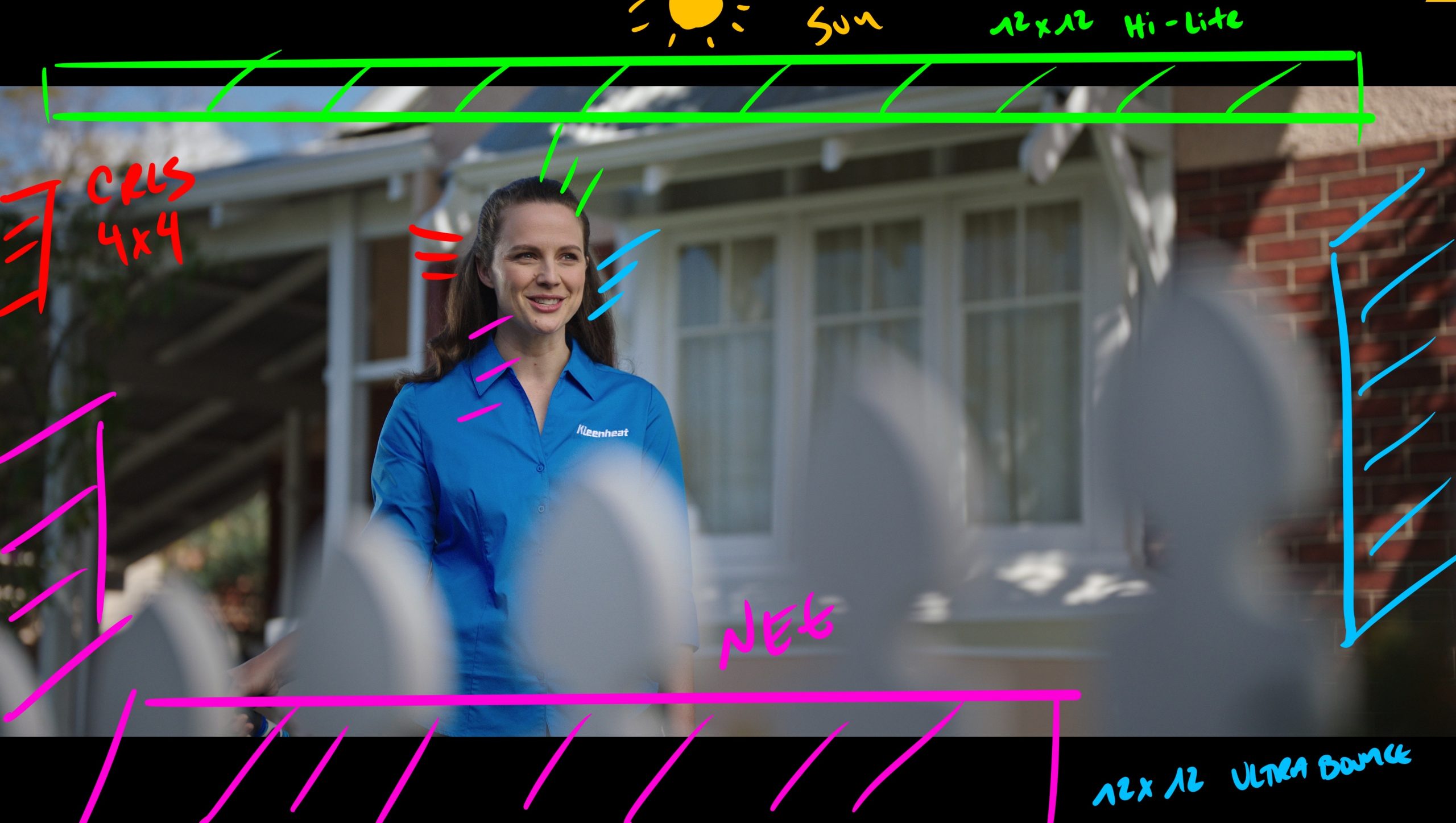 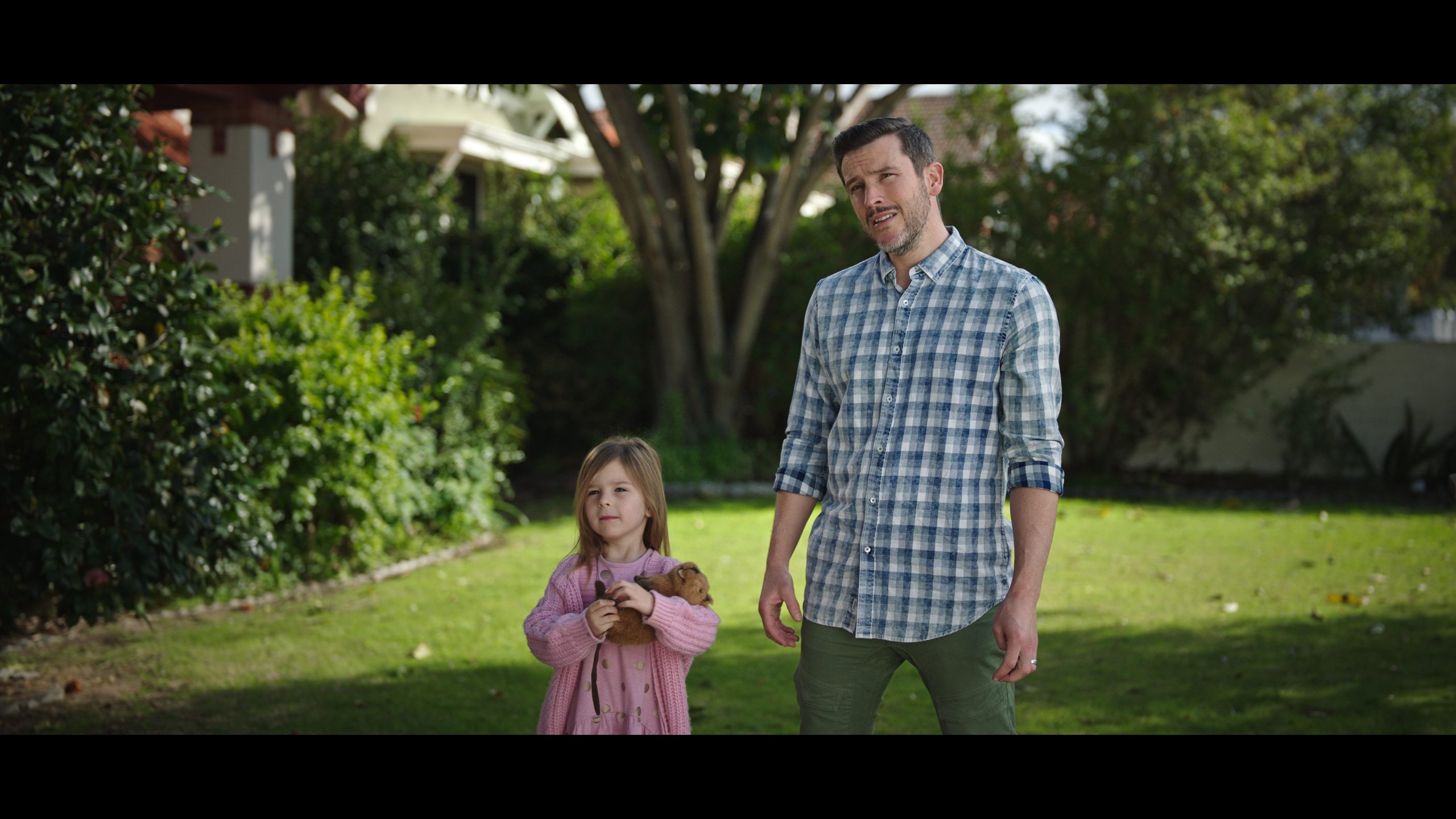 The mid shot of the father and daughter.

Same set up as Shot #6 but with the addition of the CRLS reflector for the back edge from frame left.

The added contrast on their faces is from being able to move the 12x12 neg closer on frame left as well. 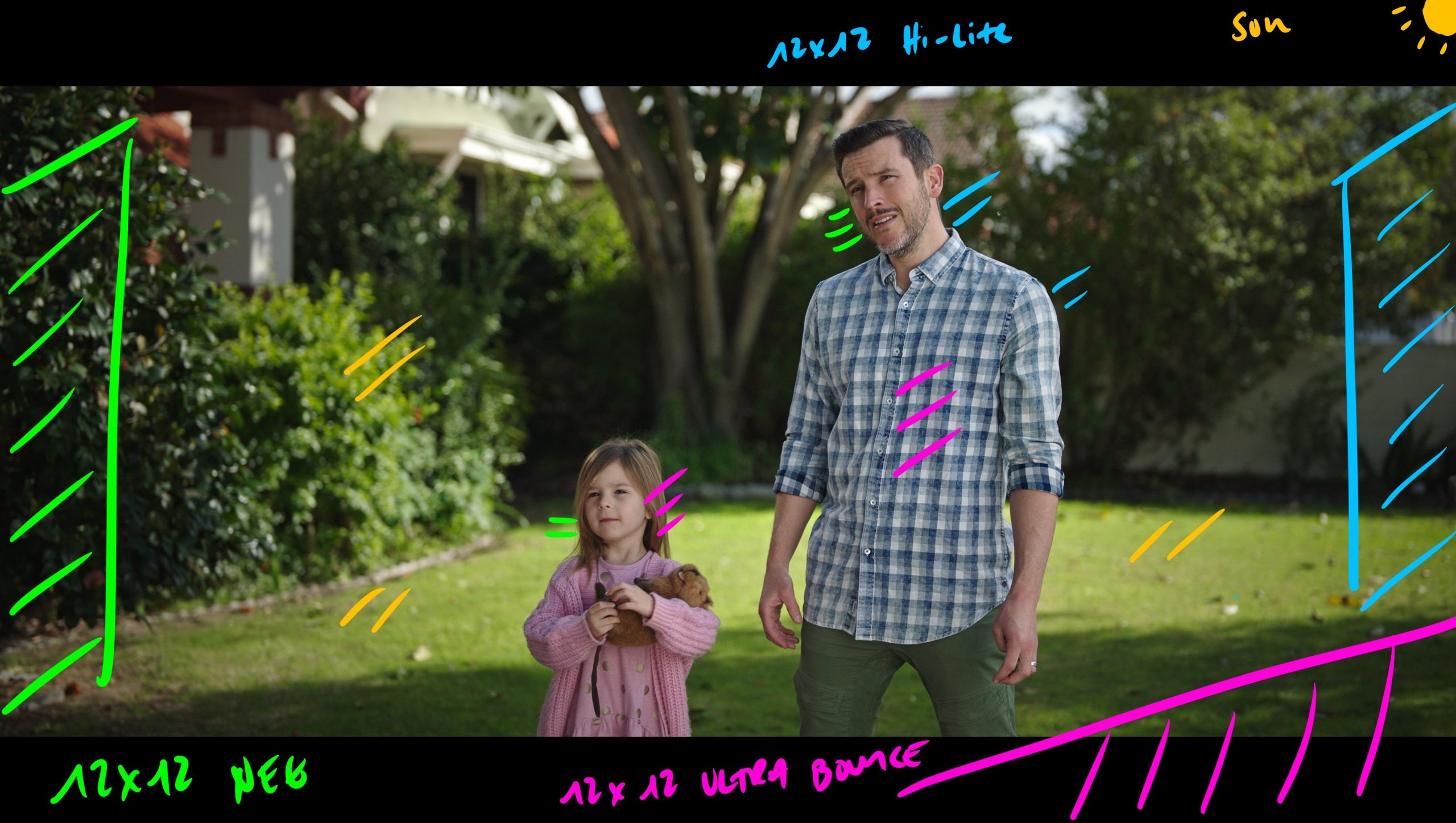